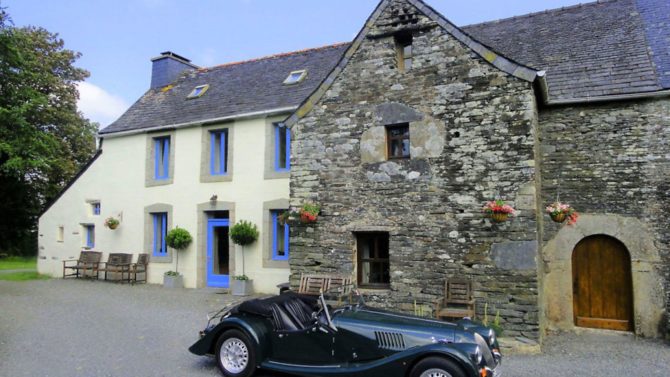 Many Brits dream of moving to Brittany and running a B&B or gîte business but what is it really like to live and work there?

Ben Dickins and David Todd moved from London to the small village of Saint Cadou in Finistère in January 2015 to run Kergudon, a gîtes and chambres d’hôtes business

What attracted you to France?

Before moving to France we were living in south-west London and enjoying everything that London had to offer, but we arrived at one of those points when we thought about what else we might want to do and whether we had the courage to make a complete change of lifestyle. David had worked in Saint-Émilion for a short period and had really enjoyed the experience so we looked at potentially moving to France. The catalyst was a very late night, boozy, dinner we had with relatives who then sent us some details for a business for sale in Brittany and that made us take things seriously!

Why did you decide to move to Brittany?

We actually weren’t that familiar with Brittany, or Finistère, when we started looking but there were a balance of things that we thought were important. Ideally we wanted somewhere that didn’t get excessively hot in the summer; somewhere that attracted a lot of visitors as we were looking at doing something with holiday accommodation; and somewhere that was fairly accessible from the UK in case we ever needed to return for family reasons. Brittany seemed like the perfect choice, and Finistère was the more suitable of the departments as it had the perfect combination of rural, coastal and cultural.

How did you find your French property?

As part of our research we attended a number of exhibitions and events in London where estate agents showcased various properties and we monitored various websites specialising in selling businesses in France. We found Kergudon, the properties that we eventually ended up buying, online. They came up in a number of internet searches because they had been on the market for a few years and they always looked interesting. We started a conversation with the owners who were very accommodating and allowed us to use Kergudon as a base for a couple of visits to France when we came to view other businesses and properties. Having done so the decision always seemed to come back to Kergudon being the most appropriate as a combination of location, potential and, of course, what we could afford.

What are your plans for Kergudon?

Kergudon was being run as a gîte and chambres d’hôtes business at the time, although the previous owners would be the first to admit that they had lost the love for it. They had renovated some of the properties 10 years before but there hadn’t been a lot of investment in recent years as they had hoped to sell. As such, there was a lot of refurbishment required when we bought it and we have lots of ideas and plans for developing the properties and grounds which we are doing as much of on our own as we can. David was a personal trainer in London and so wanted to convert what was a games room into a fitness suite so he could continue with local clients. That meant that we had to create a new games room which we did by building a large wooden framed garage for guests to park their cars in. We have plenty of other ideas for terraces, pergolas, ponds and more so the renovations will take some time yet!

How easy was it to establish the B&B and gîte business?

Getting the business established hasn’t been too challenging. Despite the French reputation for bureaucracy and administration it proved very simple to set ourselves up. As it had been run as a gîte business when we arrived much of what we had to do was update our details with the mairie and decide if we wanted to continue with some of the French tourist agencies or if we wanted to start again. As our French was rusty, to say the least, when we arrived, we chose initially to focus on the UK market. However, since we have been here we have seen that this part of the world is popular with German and Dutch holidaymakers and we have translated our website into other languages.

10 tips for running a gîte

What do you most enjoy about living in Finistère?

There are many things to enjoy about living in Finistère, including the fantastic seafood available; the wide variety of landscapes and countryside but most of all we love the Breton people themselves. They are very independent minded and see Brittany as a very distinct, and separate, part of France. They are very protective of their Breton culture and celebrate it in many ways – our village has numerous Fest Noz events (night festivals) throughout the year with Breton music and dancing.

Being in the extreme west and subject to the Atlantic influence, we always compare the weather in Finistère with that in Cornwall as it doesn’t have too many extremes. In the summer it is hot, but not unbearably so, and in the winter it is cold, but not excessively. Generally, it is always a degree or two warmer than the south west of the UK and not as wet. Being principally rural, each season brings a different sense. The spring is green with new growth and young animals; summer is warm and allows lots of beach visits and swimming; autumn and winter are red, brown and yellow and perfect for forest and woodland walks with the dog.

Where is your favourite market in Finistère?

We have certainly not experienced every market in Finistère, although we know that they can vary hugely from town to town and season to season. Our absolute favourite so far is held in Daoulas every Sunday morning which has, among other things, fabulous fruit, vegetables, meat and seafood. There is also a great fresh produce market once a week in our nearest market town, Sizun, which is much smaller but has all of the things that you could possibly need from a selection of the local farms and producers.

How to survive the summer season running a B&B

How did these expats turn their hobby into a business