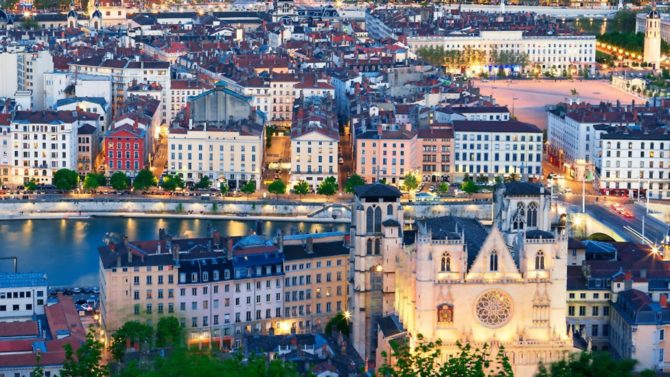 A report from l’Etudiant has revealed the top student cities in France. We look at the top 15 and what makes each one a great place to study

Full of history and beauty, Lyon offers opportunities aplenty for students to grow, learn, socialise and start their adult lives. There is an array of study options available at the ample institutions. The University of Lyon COMUE has 12 member institutions and 25 associated institutions. Members include the Université Jean Moulin and the Université Lumière, which offer courses in humanities and social sciences, and the Université Claude Bernard, which teaches science and technology, sports and teaching. The l’Etudiant’s study particularly highlighted the city’s dynamism – giving it 10/10, quality of life (9/10) and employment (10/10).

Students in the southern French city of Toulouse can enrich themselves with all the Toulouse culture the city has to offer, at a discount. A culture card, available to residents under 25 for €5 a year, entitles young people to discounts in cinemas, theatres and museums including art gallery Musée des Augustins and archaeological museum Musée Saint-Raymond which has a large collection of Roman objects – the city scored 10/10 for local initiatives and 9/10 for culture. Students also highly rated the city’s sports facilities (9/10) as there are skateboarding, tennis, football, handball and athletics facilities freely accessible. It is also easy for students to get around the city without a car using the two métro lines, trams, buses, and cycle routes.

Montpellier has grown as a student city over the last 10 years with a 29% increase in students, according to the l’Etudiant study. The Université de Montpellier, which attracts around 7,000 international students a year, made first place in Reuters’ ranking of Europe’s Most Innovative Universities 2018 despite being 800 years old. Perhaps Montpellier’s 2,750 hours of sunshine per year also contribute to its attractiveness and helped it achieve a score of 10/10 for ambience and quality of life. Should this beautiful city seduce students to stay on after they complete their studies, it is good to know employment opportunities in the city are also increasing.

A smaller, lesser known city than the top three rankers; Rennes is noticeably a university hotspot. Students make up 20.2% of the residents in this dynamic city which has great study options and is budget friendly. The l’Etudiant study gave housing in Rennes 9/10 as the city has good availability of rental properties and good prices – a median price of €365 per month on leboncoin.fr. The city in Brittany, northern France is home to the Palais du Parlement de Bretagne, a stunning historic parliament building constructed between 1618 and 1655. And how appropriate, as a student city, that Rennes is only 30 minutes from Bécherel, Europe’s third official book town, which has a book market every Sunday and a book festival once a year.

Grenoble, in south-east France, is particularly good for research and postgraduate study and for inspiring scientific minds. Louis Néel, who worked and taught in the city, won a Nobel Prize in Physics in 1970, while just last year the 2018 Nobel Prize in Physics went to former Grenoble student Gérard Mourou for his work with high-powered lasers. The city in the Auvergne-Rhône-Alpes region of France has a beautiful backdrop of mountains and the banks of the River Isère offer a beautiful place for a walk, especially when lit up at night, while the restaurants and bars of Notre-Dame-Sainte-Claire offer a more active nightlife. Grenoble also has a very low unemployment rate of 7.2% and was recently ranked the top city in France for finding a job and an affordable home in a barometer by Jobijoba and Meilleurtaux.

Now a key player in the future of technology, Bordeaux is a rapidly growing city and an exciting place to be. Furthermore, with new high-speed rail links Bordeaux is only two hours from Paris. The Université de Bordeaux, which was number 30 in Reuters’ ranking of Europe’s Most Innovative Universities 2018, offers a large range of courses taught in English. While the city is embracing the future it still maintains and cherishes its heritage and 18th-century architecture, and is named as a Ville d’Art et d’Histoire.

Nantes is a lively and industrial city with a growing economy – over 3,500 companies are set up in Nantes every year, according to nantes.fr, while heavyweights such as Airbus Group, Credit Agricole, Unilever, EDF, Carrefour and BNP Paribas all have offices there, making it a great city for students to gain internship experience as well as potentially starting a career. The Université de Nantes, which has a 10% international student intake per year, has its own student venue the Pôle Étudiant where concerts, exhibitions, debates, film screenings and theatre shows are held throughout the year. And, off campus, the city centre also has plenty of bars, clubs and restaurants.

Unsurprisingly, Paris scores 10/10 in the l’Etudiant study for culture. It is home to a whopping 79 major museums (museums that receive more than 10,000 visitors a year) as well as theatres, venues and heritage sites. The capital has seven of the 19 French institutions in the top 500 of the 2018 Academic Ranking of World Universities. The large student population in Paris is very well supported by the city council – since 2012 it has offered advice and funding to student associations, which they can use towards equipment, spaces and creative projects.

The cosmopolitan city of Strasbourg is a centre for political debate and discussion. It hosts the World Forum for democracy annually and is home to the council of europe headquarters, and the European Parliament, two institutions whose debates are open to the public, so a superb environment for engaged students to see democracy unfold. Strasbourg loves its students and has even created a website saying as much, strasbourgaimesesetudiants.eu has useful information on transport, housing and on things to do. The organisation also puts on its own free events for students throughout the year.

Lille in northern France is home to one of the largest universities in France, making it an attractive option to both local and international students. The Université de Lille has 67,000 students and welcomes 8,000 foreign students a year. There is plenty happening in Lille all year round to keep the student population occupied. The city is home to some exciting venues large and small including the Zenith, a 7,000 capacity venue in the city centre, the Biplane, a small volunteermanaged theatre and concert hall, and La Gare Saint-Sauveur a former freight station, which was converted by the City of Lille to host cultural events. Students can easily kit themselves out with all they need as many of the shops in the city offer large student discounts, and for some unique finds they can head to La Grande Braderie, the largest flea market in Europe, which is held every September.

In the west of France, on the edge of the Loire Valley and the Loire-Anjou-Touraine regional park, Angers is home to the Ecole Supérieure d’Agricultures (ESA), a higher education and research institution specialising in agriculture, food, environment and international markets, as well as the multidisciplinary Université d’Angers. Angers is half the size of Nantes, a fellow ranking university city that is only 90km away. But Angers’ smaller size is its advantage. The pleasant city has plentiful green space with 630 hectares of parks, while still also having all the activities and amenities expected in a city, meaning it is highly rated for quality of life.

In 2012, three universities in Aix-en-Provence and Marseille combined to create Aix-Marseille Université, which today has its headquarter campus on the seafront in Pharo, Marseille. As well as being beautifully located on the southern French coast, Marseille is full of culture with more than a dozen museums including the MuCEM, which is dedicated to the civilisations and culture of Europe and the Mediterranean, and the Musée des Beaux-Arts, a fine arts museum established in 1801 and located within a wing of the stunning Palais Longchamp.

In rural western France is the traditional provincial city of Poitiers, with its old world charm and one of the oldest churches in Europe. One of Poitiers’ biggest draws for students is the cost of living compared to some of the larger cities. The average cost of student housing in Poitiers is among the lowest in France, with a median price of €320 per month on leboncoin.fr. Students in the area can also get good discounts on transport and cultural activities. The city has a large student population with 25,000 students, including 4,500 international students.

Another seaside location, Nice, home to the famous Promenade des Anglais, is a vibrant city with plenty of sunshine that attracts people from all over the world to visit, live and study. International students make up 21% of students at the Université Nice Sophia Antipolis. Just half an hour down the coast is the Sophia Antipolis technology park, Europe’s leading technology park with more than 2,000 companies and around 36,000 employees, presenting an enormous opportunity for students. The university also has links with key research institutions such as the National Centre for Scientific Research and the National Institute of Health and Medical Research.

Nancy, a beautiful city full of 18th-century architecture is the capital of the Meurthe-et-Moselle department in the Grand-Est region. One of the newest and most exciting university campuses in France, the ARTEM (Art, Technology and Management), is found here. Part of the University of Lorraine, it was launched in September 2017 and it brings together the National School of Mines of Nancy, the National School of Arts and Design and the ICN Business School to create a place for cross discipline innovation and is a fantastic place for students with entrepreneurial aspirations.

Previous Article Win! The smash hit film Sink or Swim
Next Article 18 French words to use at Easter