The differences between British and French comedy 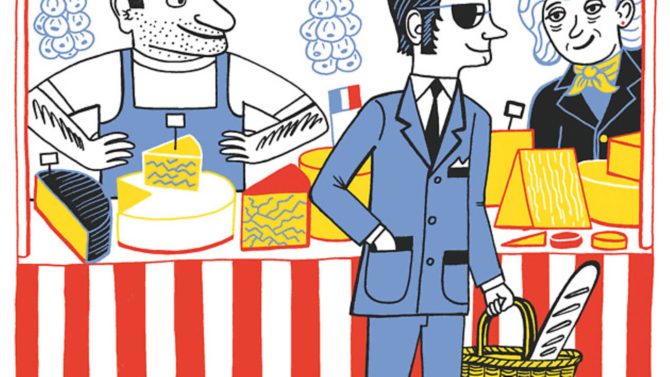 I didn’t move to France with the sole intention of baffling the French, but despite 10 years in the Loire Valley, it seems that that is exactly what I still do. My half-French wife Natalie and our three Anglo-French boys, they adore; I, however, am considered something of an eccentric. A ‘chutney-maker’ they can tolerate, as long as I don’t besmirch the local, world-famous goat’s cheese; a ‘mod’ has them mystified as I strut around the farmers’ markets in a very un-rural buttoned-up mohair suit. But a stand-up comedian? That has them scratching their heads.

It’s often cited that one of the world’s most arduous diplomatic efforts would be trying to explain the rules of cricket to Americans. Perhaps, but explaining stand-up comedy to the French can be just as exasperating. Believe me I’ve tried often.

“Well…” And off I go again, the definition of what I do for a living becoming increasingly vague the more I try to narrow it down, and me becoming more po-faced as I try.

The problem lies in the direct translation: ‘un comédien’ in French means ‘an actor’. So if I say “Je suis comédien”, the French have every right to assume that I’m an actor. I’ve tried ‘comédien humoriste’ (“You’re a funny actor?” “No, not really.”), ‘humoriste’ (“You’re funny?” “Well, most of the time…”) and ‘raconteur’ (“Sorry, what?” “Never mind…”)

It’s not that the British and French sense of humour is that far apart. There are different performance traditions certainly: the confrontational, heckling environment of English stand-up is a world away from the physicality and slapstick of Benny Hill and Mr Bean, both massively popular here in France. The truth is: physical humour translates. It’s universal.

I don’t do physical, however, and so I approached my first-ever stand-up gig in French with complete and utter terror. I’ve been a comedian for a long time. I’ve performed for royalty, frontline soldiers and rioting school kids; I’ve been ‘approved’ by the secret police in the Middle East, followed a burlesque in Boston, and had a gun (fortunately fake) pulled on me in London.

Nothing had prepared me for the sheer, unadulterated fear of that gig in French though. And this is what I perceive to be the big difference between French and English humour. The British can, and often do, laugh at themselves – the French, less so. My English language set is based around looking at and laughing at the English, and it strikes a chord. My French language set, once I’d finally written it, was based around looking at and laughing at, erm, the English. It went very well, far better than I dared hope, but it did feel slightly disloyal.

“Ah! I understand now!” says Didier, putting on a DVD to illustrate his understanding. The DVD showed a couple, just their heads poking through a black curtain with pretend costumes changing rapidly underneath them to mass, incomprehensible, hilarity. I stared wide-eyed at this, to my mind, comic anachronism. My jaw hit the floor.

“No! No!” I say, a crowd gathering to watch. “I employ nuance, wordplay. I set up observations; break down stereotypes; help people laugh at themselves.”

“So not like this then?” Didier perseveres, and I miss the mocking twinkle in his eye.

“No!” I say, storming off with haughty superiority but succeeding only in tripping over a discarded toy, falling forwards and going head first through the open patio windows into a large flower pot.

I get a round of applause for some reason; the crowd apparently satisfied that I might actually be professionally funny; then I heard someone say: “Yes. But what’s a mod?”

We’ll leave that one for now.

Ian Moore is a comedian, writer, chutney-maker and mod who lives with his family in the Loire Valley. Look our for his next column in the March 2015 issue of Living France. His latest book is C’est Modnifique!, (£8.99, Summersdale Publishers).

Read more of Ian’s experiences of life in France:

Back to school in France