Taking on a château in the Loire Valley in France: “Have fun, do it!” 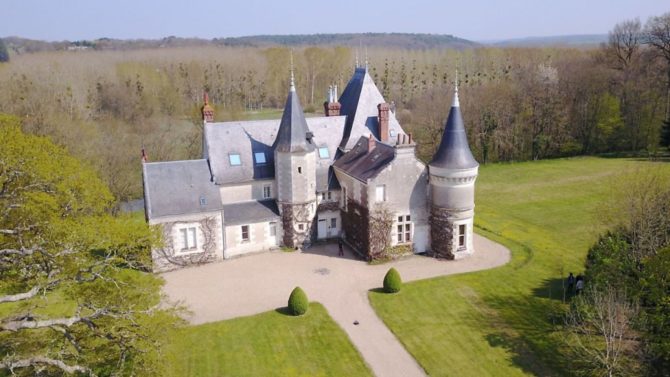 Roxanna McDonald has owned Château du Breuil, in Indre-et-Loire, for 30 years and is passionate about preserving the historic building. Guests are able to rent a wing in the oldest part of the castle which dates back to the 15th century

What attracted you to Indre-et-Loire?

On the way home from a holiday in the South of France my husband and I decided to stop in the little town of Loches, in Touraine, a region of Indre-et-Loire known as “the garden of France” thanks to its mild climate and lush gardens and which had links to English medieval history which interested us both.

How did you discover Château du Breuil?

Across the road from our hotel was an estate agent in whose window we saw photos of interesting buildings and decided to have a look at some of them. One of these buildings was Château du Breuil with an intriguing interior view photo.

I can’t say it was love at first sight as it looked pretty forlorn with a leaking roof, peeling walls and brambles up to the entrance door.

What condition was it in when you bought it?

The building had a puzzling layout, a dichotomy between a very old part and a newer, seemingly more important one, with no indication of a coherent design. Everywhere there was evidence of leaks from frozen pipes, broken gutters and the defective roof.

What was magical was the setting: overlooking from a height the picturesque valley of the Indrois river with glimpses of the village in the distance. Before leaving, we went back again one evening and as night drew in, glowworms were glittering along the path and an unbelievably clear night sky sparkled above with an infinite number of bright stars while crickets and a nightingale sang. We were hooked!

What has the restoration entailed?

As architects, we were used to dealing with dilapidated buildings having handled multi-million projects in the UK. We had to adjust to the French planning regulations, learn the technical terms and most of all understand our building.

The first stage of our work entailed re-roofing and upgrading the services – electricity, water supply, phone and sewage – as the existing ones did not comply with current regulation.

Two years on from the date of purchase the basics were done and a few rooms were decorated so we decided to move to France for good. We spent most of our time cleaning and decorating in between stints of work for UK projects.

Did you make any interesting discoveries?

One day, when my husband was cleaning the guano from the floor of the dovecote, he found underneath a large stone decorated with a bas-relief, which appeared of classical inspiration. We decided to take it to the British Museum and to our total amazement it turned out to be a Hellenistic Votive Plaque from 4th century BC and apparently another like it was in an Athens museum!

What do you know about the château’s history?

The departmental archives are my second home as I am forever searching and learning something new about the castle. All Château du Breuil’s property deeds were ceremoniously burned by the Revolutionaries, and the church linked to the castle demolished and the church plate confiscated.

In fact Saint-Michel, where Château du Breuil is located, was a completely separate parish and lordship from Chédigny, originally built by Carthusian monks. In the 18th century, the owner (a minor aristocrat) somehow managed not only to keep the property from being confiscated, but managed to talk the Revolutionaries into making him a commander of the national guard!

In the 19th century Château du Breuil was bought by a family connected with the Suez and Panama Canals and had plenty of money, which they used to extend and ‘modernise’, hence the newer wing.

Did you always plan to offer self-catering accommodation?

Our marriage became strained under the pressure of completing the work and eventually didn’t survive. I decided to remain in France to finish the job, especially as I was more and more involved in researching the history of the place.

At this point I had the idea of letting one wing to tourists to keep the house in use and help with the various charges. It had to be self-catering because I started my own business and was travelling for work to the UK and Europe.

Do you enjoy sharing the castle with guests?

At the beginning I was a bit apprehensive about having strangers in the house but it proved a great experience. I met a lot of nice people from all over the world – Brits, French, Dutch, Germans, Italians, Americans, many of whom remained friends and came back again and again.

Life was, and is, hectic but enjoyable. There is always something to do.

What do you most enjoy about living near Chédigny?

The area is absolutely packed with interesting places to see and things to do from visiting castles and beautiful gardens, antique and car boot sales, amazing walks and hiking with groups, cycling tourist routes, balloon trips to shopping or going to opera in Tours. There are little cinemas, gourmet restaurants, exhibitions and lots more.

Château du Breuil’s little village, Chédigny, has become a tourist attraction thanks to the planting of 800 rose bushes which has led to it being designated a ‘remarkable garden village’. Its popularity has enabled the opening of a little restaurant, the re-creation of a vicarage garden and vineyard and an art exhibition. The Chédigny annual Roses Festival attracts thousands.

Which restaurants do you recommend?

There are lots of little restaurants and bars, which serve excellent food such as La Lanterne in Loches or Auberge du Mail in Cormery, but for a gastronomic experience one has to go to Amboise to Château de Pray, La Promenade in Petit-Pressigny or to La Roche Le Roy in Tours.

Is there any aspect of living in Indre-et-Loire that surprised you?

What surprised me living here is that there are still preconceived ideas about the Brits. Once an old man said to me: “You burned our Joan of Arc!” Also, I was surprised that there are about 15 ‘Château du Breuil’ in France, one at only 40km from me.

A breuil, I learned, is a wooded enclosure which protects deer.

What advice would you give to expats thinking of taking on a château in this area of France?

Buying and restoring a castle in France is not for the faint-hearted. A few words of advice for those who brave it: Do not use the same notary as the seller. Make sure the boundaries are marked (the seller’s responsibility) and take photos of all the boundary markers. You will be surprised how quickly these markers disappear and their absence can lead to disputes.

Get in touch with the Mayor who will be able to help you in recommending reliable builders and advise on getting the approvals. It is worth getting advice from a professional or use the services of a company who quality controls that the work is executed correctly. They are not cheap, but it will save a lot of money in the long term.

The best advice is enjoy it! Even if sometimes it will drive you mad, you will laugh about it later and have beautiful memories. Have fun, do it!

Escape to the Château: DIY checks into a boutique hotel in the south of France

Escape to the Château:DIY captures ups and downs of life in a medieval French château

Take a stroll in Chédigny

Previous Article The Plus Beaux Villages you might not have heard of…and 7 other things we learnt in the July issue of French Property News, out now!
Next Article These are the French properties in demand after lockdown