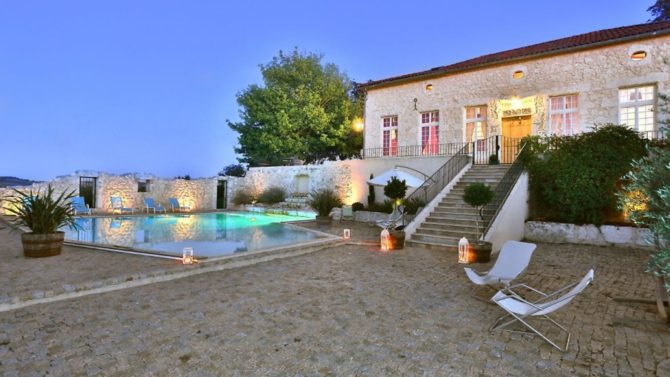 Kim Reeves moved to Castelmoron-sur-Lot in south-west France nearly 20 years ago to transform an 18th-century farmhouse, Domaine de Rambeau, which she runs as a B&B and gîte with her French husband Christian

I had just finished renovating an old Georgian pub, turning it into a four-bedroom Georgian townhouse, in the centre of old Cowes on the Isle of Wight. I had been considering a move to France for a while. The choice was to return to work and buy somewhere in the UK or make the leap to France.

At the time I had actually read in Living France that our children were a good age to make the move, as they were old enough to speak and write English but still young enough to enter at primary level in the French school system.

What attracted you to Lot-et-Garonne?

Lot-et-Garonne is known as one of the most welcoming departments in France. It was far enough south to benefit from a better climate, but not so far south that the culture became Mediterranean. I wanted to still be within reach of the sea which ruled out the east of France and the countryside here is beautiful with lots of hills and valleys.

How did you come across Domaine de Rambeau?

Domaine de Rambeau was sent to me by an agent after the house I was hoping to buy fell through. From the initial photos I was doubtful as it looked like a bungalow. The French agent, however, thought it was worth a visit – its sale had just fallen through and I had to make a quick decision, so my parents looked after the children for the weekend and I jumped on the Eurostar.

Although it was quite a ruin I fell in love with the location and the scale, which is enormous – the front door is 3.6m tall and the ceilings are even higher.

Did you have to do a lot of work to the property?

When I moved in with my ex-husband, the house was considered derelict. Some of the floors were still beaten earth, the roof leaked, the windows in what is now the kitchen had no glass and the wooden floor over the cellar and upstairs was unsafe to walk on. We sort of camped while we worked on renovating the house, taking it section by section.

How long have you been running it as a B&B?

We have been running the house as a B&B since the children left home around six years ago. Visitors love the peace and quiet and the views over the surrounding countryside. We have quite a lot of guests who come from the cities of Bordeaux and Toulouse for the weekend to escape the bustle of the city.

Was it a challenge to renovate the barn into the gîte?

Renovating the barn to a gîte was much easier than the house had been, as we were not trying to live in it at the same time. It was quite a luxury to be able to leave the dust and mess at the end of the day.

In the past, it had obviously been a barn with accommodation as well, as people often lived over the animals for warmth. All the windows were already there with cut stone surrounds. There was also a chimney on the ground floor which has been refurbished to accommodate the oven in the gîte’s kitchen. A smaller section of the barn, which previously housed a donkey we rescued that has now been rehomed, was transformed into the spa and sauna room.

What do you most enjoy about living in Castelmoron-sur-Lot?

We were so lucky to move into the village of Castelmoron. For the house I had initially hoped to buy I had researched the local school and village. I had done none of that here. Castelmoron is a pretty, thriving village with schools from primary to 16 years. There is also a medical clinic, dentist, supermarket and bank. So many little villages in rural France are ghost towns, but Castelmoron is particularly vibrant in the summer with music festivals, night markets and activities on the River Lot which runs through the village. Everyone has been so friendly right from the start, I have always felt part of the community.

I love all the seasons here! In the spring, the plum trees around us are full of blossom and everything is bursting into life. In the summer, the weather is hot with balmy evenings where we can eat outside under the stars. The autumn is quieter after the rush of the summer and the weather is often good until the end of October. The winters can be cold and sometimes the temperatures drop well below freezing. It is crisp and cold with blue skies, if we are lucky, if not it can be mild and wet.

Castelmoron has a weekly market on a Wednesday that runs all through the year which is great for fruit and veg and cheese. The big markets at St-Livrade and Miramont are good meeting points and great for the extras like plants and bed covers.

Our favourite markets are actually the evening markets that take place over the summer. They are held in different villages each night of the week, with our favourite being nearby in Laparade, which is held every Tuesday in July and August. At these markets, local producers have stalls and there is live music. You can go around and purchase pre-made salads, cheese, bread, cuts of meat from the butcher’s stall that is cooked in front of you, chips cooked in duck fat and bottles of wine – everything you could possibly want for an al fresco dinner and then sit at the tables that overlook the valley to enjoy your food and the music. It is a really nice authentic experience and one not to miss if you’re ever in the area.

Is there any aspect of living in France that surprised you?

The amazing medical care and the quality of the schools never cease to surprise me, even after having lived here for 19 years. One of the reasons for making the move was the reputed education system. I had sent my three children to a small private school in the UK, which was excellent, but I couldn’t afford to continue with the fees.

I felt that even if the move was not a success and we only stayed in France for two years, at least the children would be bilingual. They were eight, nine and 10 when we moved, and although it was very hard for them at the time going straight into a French school not speaking the language, they now tell me moving here was one of the best things I have done for them.

What advice would you give to expats thinking of moving to Lot-et-Garonne?

It is a great department, with easy access back to the UK from Bergerac airport. There are quite a few English speakers in Lot-et-Garonne but I would pass on the advice I was given before moving here – make friends on the same basis you would in the UK, not on the basis that they speak your mother tongue. If you make an effort to mix and try to make friends with local people, you will be welcomed and will enjoy the full experience of living in an amazing department in a beautiful part of France.

Escape to the Château: Dick and Angel launch Dare to Do it at Home competition

Pool with a view: 6 dreamy French properties with pools to dive for

Previous Article The best places in France for car enthusiasts…and seven other things we learnt in the June issue of French Property News, out now!
Next Article 7 absinthe cocktails to make at home – which could bring out the artist in you