Running an activity holiday business in the Pyrenees 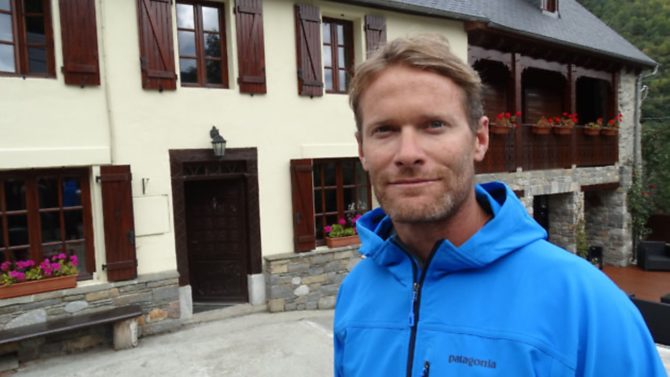 From the day he first stepped onto a dry ski slope in Edinburgh as a small boy, James Dealtry was hooked. Today, he has 18 ski seasons under his belt, is a French-qualified ski instructor and high mountain guide, and has turned his passion for the outdoors into a luxury activity holiday business, which is based in the breathtaking surroundings of the French Pyrenees.

His concept for the business is simple: he offers tailor-made holidays for up to 14 guests; offering them the chance to try a multitude of outdoor activities including skiing, snowboarding, ski touring, cycling, walking, climbing and white water rafting to name but a few, while staying in the

Home for the duration of their stay is L’Ancienne Poste – the old post house – in the Pyrenean village of Avajan. James found L’Ancienne Poste on a house-hunting trip in 2006. The building was in a sad state of repair and James has painstakingly restored it; creating a well laid-out, energy-efficient, cosy and comfortable base for his guests.

“I spent ages seeing various estate agents, and I’d almost given up hope of finding something that was a project and had enough rooms for what I wanted to do,” he says. “I drove past this place, and I noticed that there was a hand-painted ‘for sale’ sign with a phone number. It took me a couple of days to get the local farmer who owned the property to let me in and see it! I had a look round and it was a real wreck, but it had enormous amounts of potential.”

The building had an interesting history: from the 1920s to the late 1940s it was the main sorting office for the Louron Valley in Hautes-Pyrénées, where Avajan is one of six villages dotted along the valley floor, but it hadn’t been lived in for many years and was in a sorry state of repair.

“The house was in two sections,” says James. “There was the house and then to the side of it there was an attached barn where they used to keep the animals below and the hay above. That side of the property was very run down, and the roof had fallen in. The house itself was habitable, but only just. It hadn’t been touched for about 130 years! It definitely hadn’t been decorated, and it hadn’t been lived in for about five years when I bought it. It was very dilapidated.”

Over the next few years, James worked alongside local artisans to transform the lodge into what is now a stylish, well-appointed, welcoming and homely mountain retreat.

“The structural work was done by a local stonemason, but after that, apart from the plumbing and the electrical work, the rest of it I did myself with the help of friends along the way: the tiling, laying all the floors, all the interior walls, re-pointing and plastering, and building fireplaces.”

During the renovation, much of the original materials were recycled and James was also keen that the finished building should be extremely energy-efficient.

“It was important to me to have a very ‘green’ house,” he says. “When we dismantled the property, anything that was salvageable – all the wood, the beams – we saved and stored, and then we put back in as many of the original features as we could.

The restoration was completed over several years as James continued to work in the French Alps to generate funds for the project. He spent his winters in Val d’Isère working as a ski instructor for the École du Ski Français and his summers working as a high mountain guide in Chamonix.

Both these qualifications took years of dedication, determination and hard work but are now an invaluable part of what James is able to offer his guests.

“I love having my own property where I can bring my own guests, and I can be the person who takes them out during the day,” says James. “If they want to go climbing or cycling or hiking, I can take them, or in the winter we do ski lessons or go ski touring, or off-piste skiing.

“There are lots and lots of chalet companies working in the Alps and in the Pyrenees, and I wanted to do something a little bit different. What struck me was that none of them seemed to have their own in-house guide or ski instructor, and I thought this could be a great selling point.

“Also I love the client contact. Most of the time in Val d’Isère, I was skiing with my guests during the day and then they’d invite me for dinner in the evening, or for a drink, so I was spending most evenings with my guests anyway. I really enjoy that sort of contact, and I thought why not set up something where people come and stay with me and we look after them as a pack. They know they are going to be well looked after. Once they get here, they don’t have to lift a finger in that sense; we give everybody a real break.”

His business L’Ancienne Poste Avajan opened two years ago, and James and his team – chef Eddie Tuffin and chalet host Olivia Colson – have done two winters and two summers so far, with their guest reviews a glowing tribute to the time and energy they put in to making sure that everyone who comes to stay has a wonderful time.

The majority of guests are British, although a number also come from Norway, Denmark and Sweden; and James is often amused by their reaction when they see the Pyrenean mountains for the first time.

“A lot of people have this misconception that the Pyrenees are more like the Pennines; more like hills than actual mountains,” he says. “Often my guests arrive in the dark and they can’t see the mountains and then the next morning at breakfast they are amazed. These are big mountains and all the resorts can cater for skiers of all abilities. They have modern lifts, and snow-making facilities, and when people come to ski here, the slopes are far less crowded. It’s also far cheaper here, and the transfer times to resorts are much shorter. It’s much better value for money in the Pyrenees and they have the place pretty much to themselves.”

James now feels very at home in his adopted country, which he puts down in no small part to his fluency in French. “If you take the time to learn the language, you instantly gain the respect of the locals. I have lots of French friends, and it’s been very easy for me to integrate into the community here. I feel very comfortable living in this country now. It does feel like home.” But it is the fact that he can teach his British guests to ski in their own language that he believes is a huge advantage, and he is always delighted to see them make progress during their stay with him. “There is a great sense of achievement for me. When you see everyone all together at dinner, and they’ve all had a great day’s skiing; all laughing and talking about what happened during the day; and you think ‘I created that’, it is a lovely feeling.”

And there’s no doubt that with the business up and running, life is all downhill for James but that’s just the way he likes it!

www.ancienneposteavajan.comExplore Hautes-Pyrénées for yourself with our guide.

Previous Article Save €200,000 in the south of France!
Next Article Guide to pension tax for expats