Renovating a house in Aveyron 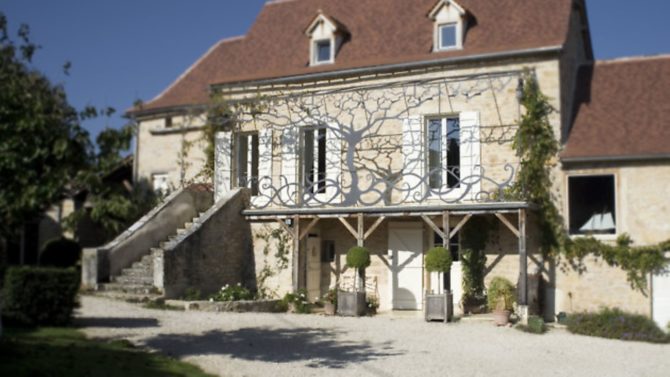 Expats David and Elaine Morgan fell in love with a run-down house in Aveyron and transformed it into a stunning rural home, we find out how they achieved this

They say that you should never buy the first house that you see, but David and Elaine Morgan did just that. To be more precise, it was the first house David spotted when searching online for a suitable property.

David was born in Shepparton, a town in the north of Victoria, Australia. He was a civil engineer and project manager, who after graduating, enjoyed a globetrotting career in the oil and gas sector. Elaine hails from Dublin, but after graduating from Trinity College, moved away from Ireland and worked as a management consultant, training staff for large corporations before their move to France.

Pure serendipity brought them to Aveyron. An elderly, but very sprightly, cousin of Elaine’s wanted to visit friends in the area, so David and Elaine brought her down to south-west France. They fell instantly for this part of the Midi-Pyrénées region; both the landscape and the lifestyle. It was a real coup de foudre. As soon as they returned home to Guilford, their quest for a suitable property commenced, and David found their house near Villeneuve on just the second day of surfing the internet.

They bought Maison de l’Arbre, the corps de ferme (main building) of a traditional farmhouse, in 2009. While not tumbledown, it was still in quite a sorry state, especially the roof. The attractions were that the property offered a cohesive set of buildings with not only space, but with a picturesque view too.

“Essentially, it was a clean sheet of paper with lots of potential,” says David, explaining their initial discovery. “Nobody had tried to renovate or alter it.”

David himself designed the necessary alterations and extensions. These were translated into the correct drawings for thepermis de construire (planning permission) by a local architect. Finding a suitable builder took a while. Two local firms were recommended, then they chanced on David Bull, a British builder who lived mere two kilometres from the house. Over a two-year period, David Bull and his team did an excellent job, turning two stables into the lounge and kitchen, demolishing a huge chimney, adding an extension, rebuilding the floors, converting an outbuilding into a small library and studio, and installing a heated outdoor pool.

A local roofer was engaged to replace the old structures, now way beyond redemption. David Morgan designed the new roof so that it was economic and swift to construct. However, Yves, the roofer, totally ignored this design and put on a traditional Aveyron-style covering. “It took ages, but it cost no more than I had budgeted for,” David remembers with a wry smile.

David and Elaine visited once a month to review progress. In between, there were twice-weekly phone calls. David Bull kept them fully up to date with the details and costs of any changes, so there were no surprises at the end. In their turn, David and Elaine paid the builder every month. Generally, things went very smoothly. The key to success was the trust and rapport on both sides.

The differences between the British and French commerce caused some delays. Britain is geared for instant delivery: France tends not to hold stock. The four French bank holidays in May with their attendant closures and the shutdown of so many enterprises in August, meant that the couple were occasionally concerned about progress.

“But this reflects the far more relaxed French lifestyle and the importance of family life, as opposed to the frenetic south-east of England,” says Elaine. “The French have got it right, which is why we are here now.”

Elaine invited her cousin Laurent Mellet, a sculptor based in Dublin, to design and make the balcony railing. Originally brought up in France, he moved back to his mother’s native Ireland at a young age when his French father died. Laurent painstakingly made templates, cut the shapes from steel plate and welded them together in the shape of a tree – hence the house’s name.

Laurent was so impressed with the area that he brought his family to live opposite David and Elaine. Totally bilingual, he now works to commission in France.

The house has been designed to be as eco-friendly as possible. This reflects the couple’s deep concern for the planet, as well as being more economical to run. A heat exchanger draws warmth from the air in winter and cools the building in summer. A wood stove heats the double glazed and well-insulated ground floor.

David and Elaine wanted a bio-digester, a septic tank that blows air over sewage to aid fermentation, but the local water company refused because of concerns about power or pump failures; eventually the couple had to settle for a fosse septique (septic tank), fitted in a few days. This degrades the waste by normal fermentation, but is not as efficient as a bio-digester. A large Australian-style rainwater tank catches run-off far better than water butts. Holding 10,000 litres when full and used for garden irrigation, the tank was easily sourced from the UK but had some problems. The neoprene bag liner leaked, so David removed it and sealed all the joints with epoxy mastic. If required, the tank could provide grey water to flush toilets, or even drinking water with the addition of a purification kit.

One other hiccup was that the main EDF Energy fuse is located on a lampost in the road, and kept tripping.

“It was a minor problem and EDF fixed it, but when it’s 1am and you have to traipse through the snow to reset it, it doesn’t seem minor at all,” David remembers.

The views across the valley from the terrace are truly delightful, and encompass their wildflower garden and the field that they own. Very much of the moment, the wildflower garden was created from scratch using mainly plants imported from Holland. Many of the varieties are not stocked in France. Meanwhile, a thriving potager alongside provides vegetables and soft fruit.

The couple took early retirement, moved into the house in May 2012, and are delighted with their choice of home, its location and the lifestyle. “Family and friends love to visit us and share our way of life,” comments Elaine of their new French home.

Both David and Elaine are musical and sing in two choirs, one in nearby Parisot and a second in the bastide town of Cordes-sur-Ciel, so renamed in 1993 to reflect the height of the fortification above the local clouds. Spare time sees Elaine take singing lessons and swim daily in their pool, while David plays a harpsichord he built from a kit. He is also a talented watercolour artist and his works are exhibited throughout the house.

Villeneuve is just four miles away and the couple thoroughly enjoy taking coffee and reading Le Monde newspaper in a café under the arches in the square. As far as the language goes, David admits to ‘getting by’. Elaine’s original degree was French, but as she had not used the language for quite a while, they both took lessons to come up to speed for life across the Channel.

Like many who relocate to France, they are in awe at the quality of the medical care available. David has a condition which calls for both normal and specialist care.

“We are delighted that you can get a doctor’s appointment very quickly and that the doctor always has time for you,” he says. “The appointment takes as long as is needed and you are always given a thorough check-up on each visit. The same goes for the specialists in the teaching hospital in Toulouse. They give you all the time you need. I’m impressed by the quality of the training and the number of young doctors being trained too.

“I left Australia when I was 25 and worked all over the world, but my idea was always to retire back home and build a house with spectacular views,” said David. “Elaine always wanted to live in France and here we are. I guess it represents the middle ground between Australia and Ireland.”

Their sympathetic restoration has produced a stylish, practical and utterly charming home which they clearly love, one in which they can relax and enjoy all that life in France has to offer.