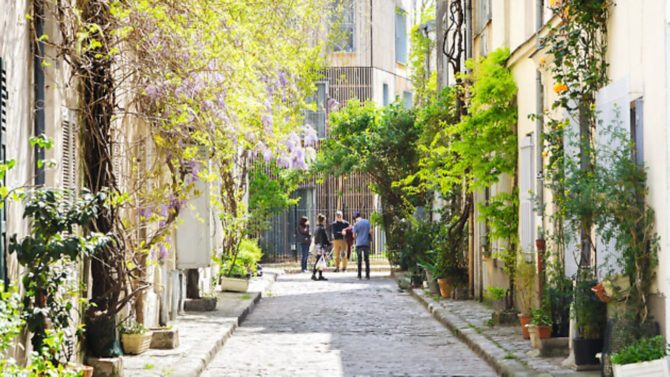 City slicker or country bumpkin? If you’re a bit of both, try one of the French capital’s hidden villages, suggests Rachel Johnston

Ah, French village life. Tinkling bicycles and family-run boulangeries; chit-chat over choosing veg at the weekly market; perhaps a Deux-Chevaux rambling unsteadily along a cobbled street. This picture of Gallic perfection is what many of us yearn for as a peaceful retreat from the ubiquitous rat race. But also, for many, the sense of close-knit community that a village can offer is at the top of the must-have list, as often the cruellest irony of big city life is feeling overlooked, isolated, and lacking identity.

Of course, my aim isn’t to dampen the excitement of living in the city; the benefit of an ‘urban village’ is having both lifestyles within easy reach, which is great news for the commitment-phobes among you. What’s more, buying in Paris needn’t be quite as costly as you think, with average property prices in Paris expected to fall below €8,000/m2 for the first time in four years.

I’ve handpicked four little-known areas of Paris – two on the Right Bank and two on the Left – that provide an old-fashioned charm all of their own while remaining slickly connected to the city centre by the excellent Métro system. Most enticingly, each chosen ‘village’ offers the cheapest average property price in its respective arrondissement. All four areas serve up community spirit and countrified character by the bucketload, to prove that being a city slicker doesn’t mean you’re all concrete and no cobblestones. Vive le village!

This gently flowing waterway with its fizzing locks is the closest of our ‘villages’ to Gare du Nord, where Eurostar travellers roll in, making it the ideal spot for a speedy getaway. Completed in 1826, the 4.5km-long Canal St-Martin connects the Canal de l’Ourcq to the Seine and is frequented mostly by Parisians. It feels like another world here; there are no museums, monuments or royal-inhabited properties, just two long streets on either side of the water abuzz with local residents and all the amenities you’d need, and closed to cars on Sundays. One of the best places to meet new pals is Chez Prune, a lively bistro with a waterside terrace where you can graze inexpensively on delicious cheeseboards and replicate the experience of a riverside village pub. Small-scale industries cling to the canal’s banks: Carré, which still makes handmade ceramic tiles, the Clairefontaine paper factory and Cristalleries Schweitzer, where glass has been repaired in much the same way since 1890. There’s a thriving street art scene here too, with new Banksy-esque creations popping up all the time and giving the area a young, modern vibe. Who said villages can’t be cool?

Located on the city’s westernmost fringe, Paris’ 16th incorporates the 845-hectare Bois de Boulogne which has been the subject matter of numerous Impressionist canvases, showing the upper classes rowing and promenading while taking in the clean air. If you’re attracted to village life for its rural element and you crave green space, bienvenue chez vous. While the district of Passy is often considered boringly bourgeois and full of expensive, characterless apartments, its smaller neighbour, Auteuil, has more rustic charm. Its architecture is heavily Art Nouveau and hameaux – gated communities – are scattered about, composed of colourful private houses behind stone walls or down alleys. Hameau Boileau is a quirky assembly of individually designed homes, and romance is personified by Villa Mulhouse, with its enclave of four secret alleys awash with vines and rose bushes. The main Rue d’Auteuil still has a look of an old country village street, with hanging signs advertising a teinturier, a bijoutier and a chocolatier. The district even has its own botanical garden where a classical music festival is held each year. Despite the concentration of foreign embassies in Auteuil, French is almost the only language you will hear as you wander around, and it’s green, flowery and peaceful: just like the best French village.

Nestled between bohemian Montparnasse and the Quartier Asiatique is a particularly well-hidden district. Originally a windmill-dotted hilltop village outside the city limits, Butte-aux-Cailles takes its name from first purchaser Pierre Caille, though a connection has also been made with the humble quail, la caille, allegedly once an inhabitant. What could be more pleasingly bucolic and villagey than the image of verdant pastures covered in windmills and quails? Today the area remains generally working-class and is a haven for artists and musicians, with Parisians still making up the majority of the residents. The luckiest live at ‘Petite Alsace’ on Rue Daviel, a half-timbered row of 40 houses built in 1912. Opposite, Villa Daviel is a terrace of stone cottages opening onto a pedestrianised street that would look more at home in Puycelsi than Paris. If no quail farmers remain in Butte-aux-Cailles today there are at least still beekeepers: Les Abeilles, on the district’s eponymous main street, is a veritable hive of activity where hundreds of honey varieties and products are sold. There’s a real community feeling in haunts like L’Oisive Thé, a popular tearoom whose name plays cleverly on l’oisiveté (meaning idleness), and Place Paul Verlaine is just like a village square, with a decorative 19th-century well sourcing natural spring water.

You’d be forgiven for wanting to dive into this feature’s opening picture Mary Poppins-style; visit Rue des Thermopyles in person, and you’ll probably try to persuade a resident aged Madame to sell to you en viager. This remarkable cobbled street, whose houses are half-buried under rambling wisteria, is one of the capital’s very best hidden secrets. Cats mew and cuckoos call, and you feel a million miles away from the clichéd Paris of the guidebooks. The aptly named Plaisance quarter is a mere stone’s throw from popular Montparnasse but battles with less than half as many tourists. Lots of families settle here as it’s safe and friendly, and what the area lacks in museums and monuments it makes up for with numerous gardens, artisan shops and markets, three mainstays of village life. You’re also spoilt for choice when it comes to cafés and pâtisseries but these are small, family-run affairs, not greedy chains. There’s never been a clear boundary between Plaisance and Montparnasse in artistic terms, with a few surviving ateliers on Villa d’Alésia – ‘villa’ meaning dead-end street – reminding us of the days when the area was a suburban village where artists lived, worked and scraped a living.

For a selection of properties in these districts, visit: