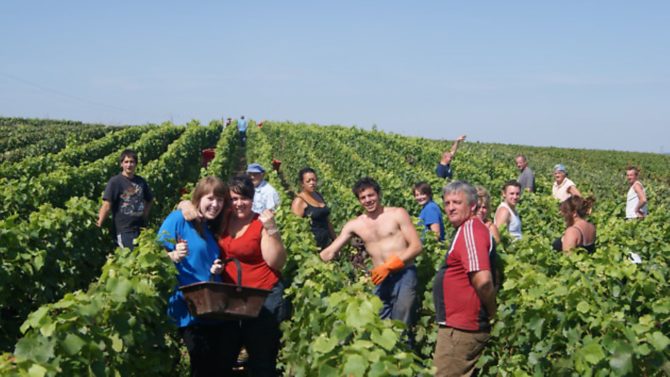 When a British student fell in love with a French champagne producer, it was the start of something very special. Rachel Johnston learns the whole sparkling story

I definitely thought I would use my French in some way – but I never thought I would end up living here, marrying a Frenchman and making champagne!” Rachel Tremblay is laughing infectiously down the phone as she reflects on how her life has turned out.

Apart from the slightly fragmented phone line – “this is the trouble with living in the countryside”, she says as she wanders about the house to find a clearer patch – I wouldn’t have thought I was placing a call outside England at all; with Rachel’s cheery Cheshire accent, I’m imagining her sitting at home in her native Nantwich more than I can see her surveying rows of vines in Champagne.

Yet there she is, sitting on a balcony with vineyards 100m away from her as she chats. This situation is all due to choosing Reims as one of her destination choices for her university year abroad – although it wasn’t her number one. Convinced she would get either her first or second choice (Nice or Nantes), by some twist of fate she ended up in the Champagne region in 2009 and met now-husband Alexis in a bar on a night out. “I wish there was a better story than that!” she giggles – but in fact, this was just the beginning of a considerably more romantic tale.

After the year in Reims, Rachel and Alexis then returned together to the University of Leeds, where Rachel completed the finals for her French degree and Alexis got a job washing dishes in the university kitchen. “He didn’t really speak English so he couldn’t get a job that required much talking!” Rachel explains. But by the end of the year she was eating her words – as well as his dishes – as he had turned his hand to cooking student meals, having learned the language and made lots of friends.

It was only on returning with Alexis to Reims after graduation that Rachel first had the idea to set up RAW France, with which she offers small-scale private tours of Alexis’ family champagne house, Wafflart-Briet, in the tiny village of Sacy. Working on reception in a hotel nearby, she would continually meet tourists who asked how they could see the vineyards and visit small producers and, knowing this was something she could offer, the seed of RAW – which stands simply for Rachel, Alexis, Wafflart – was planted.

“A lot of the larger champagne producers offer really good tours but they don’t include viewings of the vineyards, and many people want to actually see these as well, or visit a smaller producer.” With RAW, Rachel welcomes small groups of people into the family home all year round – generally two to four people at a time – and gives them a day of her undivided attention.

Tours start with a discussion about champagne and the production process, before tastings, a cellar visit and a drive through the vines, tracking Alexis down en-route, who is usually busy trimming and tending them and will stop for a chat. Clients can even have a go at labelling their own bottle, but the highlight for many is the lunch Rachel serves on the terrace, with free-flowing fizz and a dreamy view.

“I do a picnic spread and try to use all local produce – meats from the butcher in the village, bread from the boulangerie – as people like that.” And, of course, as this is Rachel and Alexis’ family home, it’s a distinctly personal affair. “Clients can come here and meet my family, and they feel like they have a connection with us as people.”

Access from the UK is excellent, with most visitors arriving in Reims by TGV from Paris, where Rachel meets them in the car. As she is every bit as effervescent as the champagne her family produces, it’s easy to see how Rachel has picked up such outstanding accolades for her tours on Trip Advisor. Clients praise both her warmth of personality and her intimate knowledge of the champagne-making process, delivered with ease having spent the university year in Reims on a teaching placement for the British Council.

I am intrigued to know if Rachel had any connection with champagne before meeting Alexis, and she laughs. “Well, like everyone, I liked drinking it!” She admits she never envisaged it would become her life and career, though. “After I’d been in Reims I decided to write my dissertation on the globalisation of champagne. My teacher was very confused. I then had to read a lot about the subject. Alexis never said I had to be involved [in the champagne producing], I just fell into it really.”

Even if the topic of champagne had to be studied, France came naturally to Rachel and was already well and truly in her blood before the RAW adventure. She always holidayed in the country as a child – her parents usually drove all the way to the south from Cheshire; no mean feat – so she became quickly attuned to the French way of life, which soon developed into a desire to learn the language. “It was really the only thing I was good at at school so I took it on to university. Alexis and I have learned from each other, but he had to be quite patient with me to start with.”

It seems the couple’s alcohol-focused French lifestyle has rubbed off on the rest of Rachel’s family; her brother also lives in France and is planning to launch a beer business, and her parents, who have recently bought a holiday home in Burgundy, stop off – and stock up – in Sacy on their way down. The ultimate entente cordiale happened with Rachel and Alexis’ wedding in February, when 70 British guests descended for a ceremony in the village church.

“We tried to combine British and French traditions – for example, men don’t tend to wear tailcoats for weddings in France and ladies don’t wear hats, so naturally we told all our guests to bring their biggest hats and dress up,” Rachel chuckles. “There are only 360 residents in the village, so it was a real British invasion!”

For Alexis, champagne has been a way of life since the age of 14, when he would help in the family vineyards. Interestingly, these vineyards – totalling just under five hectares – are spread over a total of 26 separate plots, many of which are a fair distance from the house, and in fact the vineyards Rachel is surveying from her balcony as she chats to me are not theirs. She explains it’s because of the way small champagne producers like Wafflart-Briet have bought their land over the years, in separate parcels as they saved money, and according to what was available.

“You might imagine our place to be a château with vineyards around it but it’s not like that at all – it’s basically a normal family home in the centre of the village, close to neighbours, and the vineyards surround all of us.” I have immediate mental images of competitive producers playing tricks on each other, hopping over onto a rival’s patch and tampering with the vines. But apparently, competition exists more between villages than between producers of the same village.

“We are part of a cooperative,” Rachel continues. “When we press our grapes we use the village press [there isn’t space for each producer to have their own] but we each have our own cellar.” Wafflart-Briet produces 40,000 bottles a year, all of which are sold direct to the client rather than through boutiques.

Competition between villages is entirely justified: each one is subject to an official classification based on growing quality, ranging from Grand Cru (the highest rank, awarded to just 17 of 320 villages), to Premier Cru (42 villages, including Sacy) and the remaining Autre Cru. Once set, this cannot be changed.

Despite such a concentration of producers in Sacy alone, RAW France is set apart by its English-spoken tours – most of the other village residents don’t speak English – as well as its very personal approach. So, if sitting on Rachel’s terrace, chilled flute in hand, and learning about its contents from one of its most passionate advocates isn’t enough to lure you to this lovely part of France, I’m not sure what is. You never know: you might fall in love with more than just the vines. Are you thirsty yet?