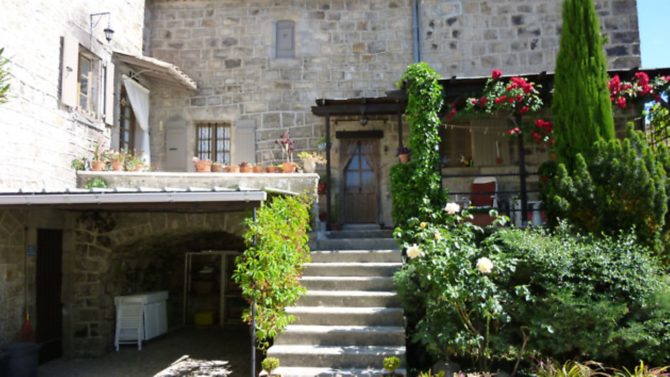 Chanced upon by her parents, an old house in Ardèche became both a painstaking project and a beloved retreat, reflects Jan Bevan

Ardèche in south-eastern France is a stunningly beautiful area of mountains and rivers with a true Mediterranean climate but, unlike parts of neighbouring Provence, it is very green and still largely unspoilt. The Ardèche gorges, already well-known for canoeing and other activity holidays, have just been granted UNESCO World Heritage Site status, while the replica of the Grotte Chauvet-Pont d’Arc, containing the oldest cave paintings in the world, opens next spring and promises to boost the area’s tourism even more.

The area was stumbled upon more than 50 years ago by my Francophile parents Peggy and Alan Anderson, who bought a large stone ruin in south Vivarais. They found the house purely by chance; it was August 1963 and they were on their annual holiday, this time in Provence, but stuck in traffic and pouring rain, heading north on the N7. They took the first exit west and headed for unfamiliar Aubenas in Ardèche, after Peggy looked up a promising sounding hotel in the Michelin guide.

It turned out to be a good choice and they decided to stay there for the last few days, there being a tennis court as well as excellent food and wine. They played for an hour or so early each morning, but on one particular day, there were others already on court and they found themselves at a loose end.

“Let’s try looking for a ruin then,” said Alan, half jokingly. It had been Peggy’s dream since she was 18 – after her first visit to France just before the war – to have a home here one day. So they set off into town. There were no estate agents in those days; properties were usually acquired by word of mouth or through notaires. So, Peggy did what she normally did when she wanted information: she went into a bar and asked.

“I know of one or two properties,” said a man, nursing a vin blanc. “What is it you’re after?” Following a chat about their requirements over coffee, they accompanied Mr Guérin back to his office for keys, and then in his car to view ‘ruins’. The first wasn’t really an option; the second involved a drive of nearly an hour to a village called Ribes, just outside Joyeuse.

The L-shaped house was in a hamlet at the end of a track, and what they saw first was a large sign saying ‘Danger de mort!’. They ventured cautiously up the steps onto a terrace with sagging roof, and in through one of the three doors opening off it. The house, untouched for at least seven years, was dark and musty inside, but after opening some rotten shutters, they could see signs of past habitation – old pieces of furniture, a few pots and pans. This first side, although extremely basic, seemed in reasonable condition.

As midday (sacred lunchtime) was approaching, they spent only 40 minutes wandering around, with their escort talking non-stop in his heavy accent, in the other older part of the house, which also had a collapsing roof. It was a mess – rotten floors and flaking plaster, cracked flagstones, soot-encrusted stone walls – but it had good-sized rooms, charm in buckets, a cold water tap, electricity and potential!

Built in beautifully dressed stone between the 16th and 18th centuries, we later learned, the property comprised three buildings in all – one, a total ruin, would have to go. A visit down into the solid, vaulted cellars convinced them the main house would definitely not fall down. There was also a fair bit of land stretching up the mountain with great views of the village, which looked cared-for.

As the church clock chimed 12, Mr Guérin suggested a drink at the café to talk things over. Price, naturally, was one of the first questions, as was the availability of local tradesmen to work on it. It all certainly seemed a possibility. Peggy and Alan said they’d give him a decision the following morning before heading back home.

After an afternoon of excited discussion, Alan said, “Oh, let’s just make a silly offer” – 10,000 francs (around £900) – and in the morning they did just this, asking Mr Guérin if he would find a lawyer to act for them. He agreed delightedly and they set off, trying desperately to picture what it was they might be buying. The acte de vente finally arrived in November, when they’d more or less written the whole idea off. Peggy describes the subsequent joys and heartaches involved in restoring it in her book Lilac and Roses: Our Home in the Cévennes Sun.

It took them over a decade, visiting twice yearly and doing things piecemeal as they had no lump sum to invest. After retirement they spent 18 happy summers there, from Easter to October, until their deaths in the early 1990s. During that time I holidayed with them and we all worked together on the older ‘Jan’s side’ to convert it into simple extra accommodation.

Once I’d inherited La Clède – named after the building where sweet chestnuts were once preserved – I couldn’t bear to let it go; I loved the life so much. I gave up my job in 1994 and began my first holiday season, running my parents’ side as a gîte and living in mine, and returning to England to work part-time in the winter. I’d bought a small terraced house in Canterbury which needed work too and this is how I met my partner, Mike, from Whitstable, who was head of the work crew. I discovered he’d bought, renovated and sold 19 houses in 10 years – and Mr Productivity had learnt a lot! Was there anything he couldn’t do? I needed him; I needed a new roof on my side.

“Don’t do roofs; I get dizzy,” Mike announced. It took a great deal of coaxing and a free holiday in Ribes to finally persuade him, and in 1995 he came down, sorted the roof, fell in love with Ardèche and, thankfully, with me too! In 1998 he joined me there full-time and from then on we renovated together. The entire place has had a complete makeover, involving really heavy jobs like more roofing, wall demolition and building, flag laying, tiling, pointing, plastering as well as decorating, electrics and plumbing – the works, in fact. We could DIY for Britain!

The land, once covered entirely in brambles hacked back by Peggy and Alan, revealed stone terrace walls on five levels. Gardening has become one of my passions and, with Mike’s help with landscaping and my addiction to planting, we have created a very pleasant space to relax in, which receives many compliments. We ran a highly successful gîte and table d’hôte for 16 years and have a visitors’ book the size of a phone directory, also full of compliments. There’s space for a pool, but the local river is so delightful to swim in that we never bothered installing one. People just seem to love the house – “Il y a un âme” (“it has a soul”), folk say – as well as the garden and the region.

Top of the heap

I can’t recommend Ardèche highly enough. France is a fantastic country with so many different landscapes and seascapes, mountains and gorges, beautiful towns and villages – and we’ve seen an awful lot of it – but for us, nowhere else really compares. When I started living here, practically none of the locals spoke any English, so good French helped a lot.

My parents were the first outsiders in the village, though there’s now an increasing number of Belgians, Dutch, German, Swiss and Parisians, who love to try out their English – and of Brits, too. Our bilingual circle of friends never stops growing.

We shall really miss this life when we leave, but after 50 years it’s time to sell up and do something different. We’re getting on, though we don’t look our ages, we’re told. That’s down to the terrific climate, the marvellously clean air, the soft water, the good food, excellent local wine (the caves coopératives have won many prizes) and the laid-back lifestyle. The locals are friendly, charming and extremely happy with their way of life – so much so that, if they ever leave, they always come back. Come and see for yourselves, and if you fancy giving up the rat race for an early retirement and a new life in the gîte business, get in touch. There’s a rosy future here for someone…

Jan Bevan’s book ‘Keeping the Dream Alive’ is a sequel to Peggy Anderson’s ‘Lilac and Roses: Our Home in the Cévennes Sun’. Both books are published by Léonie Press (leoniepress.com) [email protected]