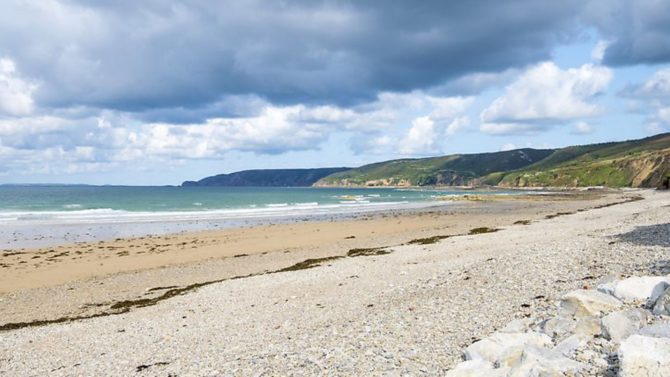 Natasha Alexander, 45, lives with her husband and their three children, aged 14, 12 and eight in Manche. She writes the blog Our Normandy Life about living in France and in particular what it’s like to move there with older children

We lived in South London and I had done so for many years. I was a stay-at-home mum (after working in the city prior to having children) and helping out with my husband’s self-employed business. We weren’t unhappy with our lives as such, but bought our property in Manche way back in 2004. This was around the time of all those television programmes such as A Life In The Sun. It was on a bit of whim if truth be told.

What attracted you to Manche?

My husband lined up some viewings on a whirlwind weekend and this was the last house we saw. It had no water, electricity, sewage, telephone line – nothing. It had no character but it was cheap. The rate of exchange was excellent back then.

I knew nothing about the area at all. Turns out we have been incredibly lucky with our choice, as a few villages away there is a microclimate (a few degrees colder and fog for about eight months of the year!) and no mobile signal at all.

My husband had done some research prior to dragging me along. He could see it was near lots of ferry ports with good links back to the UK as well as the D-Day landing beaches. There are unspoilt sandy beaches, fairly large towns nearby and it’s not too far from Paris. This area really has so much going for it. While we both like the sun on holiday, the weather being similar to the UK here in Normandy wasn’t something that put us off.

How long have you lived there now?

We moved here in May 2017 with a view of seeing how it went. It has taken us a long time to live here permanently and that was to do with Brexit really. We left the property for a long time as we were busy with our lives in the UK. It was going to be a holiday home or for retirement.

I had been put off moving as everyone says you must go before your eldest is 10. My eldest was older than this and I thought it was too late. Plus I had all the normal reservations about uprooting your whole family to a new country where no one speaks the language.

However, Brexit happened in 2016 and my son’s secondary school wasn’t great. He was also a keen cyclist, but we couldn’t let him out on his own through fear of the traffic and violent knife crime. I just thought ‘let’s do it’ what’s the worst that can happen? We come back. No one gets to the end of life wishing they hadn’t tried something. It was about trying something different that we had talked about doing. Sometimes you just have to jump without knowing all the answers.

When did you start writing your blog Our Normandy Life?

I started writing it in 2018. I wanted to write a positive (hopefully) experience of moving older children to France. That was my sole intention.

I hope I have given anyone worried about such a move, as I was, some reassurance that you will not ruin their lives! I often get lots of messages from people who are looking to make the move and I am happy to help based on what I have experienced here.

What do you most enjoy about living in Manche?

I’m a real Francophile and have always loved France and the language. I love the rolling countryside, birds of prey, the incredible sunsets/sun rises, the tranquility and the cows!

I like the many places I can visit, often for free. I love the chemins (pathways) on my doorstep that you’d have to pay National Trust to experience back home. I love the fact I can get a train into Paris if I want to and it will take just over two hours. The miles and miles of coastline with unspoiled sandy beaches with views of Mont-St-Michel. Finally, I like the Normandy people. They are friendly, hardworking and welcoming.

Have all the family settled well into life in France?

Very well. We had one set of tears from the youngest after a two-week half term but that has been it. It was full on the first eight months – we moved into three different rentals while renovating. Plus we hadn’t decided fully if we would live here permanently, this would depend on everyone’s happiness or lack of.

I had really researched the local schools (like the UK there are good ones and not so good) and had found an excellent one in our local area. The primary school is attached to the college so they are all in one setting and see each other at lunchtimes. I think that’s very important to get the school right.

In addition, we made sure the children had as much support as we could give them – extra lessons being one of them. They have worked very hard in school and their results are amazing. The eldest two took a French Diploma last year and passed, our youngest regularly gets top marks and the eldest got a très bien in his mock brevet exam. We are immensely proud of them all.

I do like the town of Caen as being a city girl I feel right at home there with the trams, shops and restaurants. My favourite beach is actually in Brittany only an hour and a bit away – Cancale – where we saw dolphins leaping out of the sea along the beautiful coastal pathway. I also like the town Saint Jean Le Thomas a bit further down from Jullouville. There’s a wonderful coastal walk and a fab view of Mont-St-Michel.

How do you earn a living in France?

When we moved here I noticed that many small businesses were not using social media effectively. I saw an ideal opportunity to set up a Social Media Management business. I manage social media accounts and also give presentations to businesses. These have included a French saw mill, gîtes, gift shops, glamping sites, food distribution and many more. It’s really interesting and I love being creative on these accounts.

My husband works for a local landscaping company via an employment agency. There is lots of work in Normandy if you have a trade.

What are your views on Brexit?

I voted remain as I like being European. I backpacked around Europe with my friend years ago in 1997. It was amazing that freedom of movement, getting a train ticket and away we went. The idea that you could just turn up in a country in Europe and have the right to live or work there is a great feeling. I felt that if we moved before 2019, a cut off so to speak, we would retain European rights.

It changes everyday but I have no regrets. In some ways I’m glad as it forced my hand. I wanted to be in control of our own destiny and whatever happens the kids are more or less fluent in French and pretty competent in German/Spanish.

I also feel it has to give them an advantage going forward, plus we can travel incognito in our French car in Europe! So in some ways, if there was a no deal Brexit, we are in the best place – mainland Europe. I believe the French government are looking to treat Brits fairly. Time will tell. Brexit certainly didn’t put us off – it had the opposite effect. I don’t lose any sleep over it.

What advice would you give to expats thinking of moving to Normandy?

Think about the land you are buying. Do you really need lots of acres, who is going to manage it and your animals? Some people here don’t go away because of their animals and being tied to their land.

Old farmhouses may look amazing with a vision to do up and that old fire looks like it packs out a lot of heat, but it doesn’t! A single woodburner will not heat your house up. You need to really think about how you are going to heat your property if you are buying one like this.

Visit a property in the evening in the summer and see how warm it is. Is the fire on? Check the local climate – as I mentioned, there is a village here that has its own microclimate.

Things that happen in the UK happen here – car troubles, doctors, hospital visits etc. Life is life wherever you live. Do you want to drive out every day to get bread? Do you really want to be remote? These are some of the questions I would tell people to ask themselves.

Finally, no one got fluent watching BBC iPlayer and ordering a baguette. You have to put the hours in. Absolutely watch French telly with French subtitles – some of the programmes are really good and you get to find out about what’s going on which you can then discuss with your neighbours. Being able to articulate yourself will make you feel less stressed and anxious about those mundane things you have to sort out.

Other than that I would say just do it!

Last-minute breaks to France for February half term