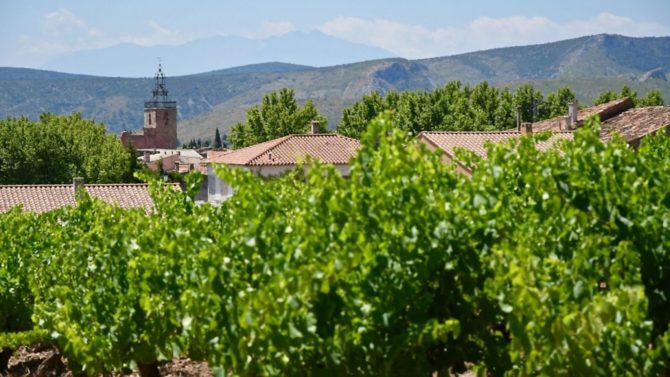 Growing up in a family of Francophiles in Leicestershire, it seems Katie Jones was always meant to end up in France, it was just a matter of how and where. “I have always loved France from when I was about 10 years old. We always had exchanges going on at home and my parents were very much involved in our local twinning association, so France was my dream very early on,” Katie says.

It was as an adult, when she was working for a Southampton wine importer that the opportunity to move permanently to France arose. She had taken a trip to one of the French winemakers the company worked with – a co-operative in the small village of Tuchan in Aude – and they offered her a sales job there and then, which she was more than happy to accept. “When I first got here, the whole village was out having one of their summer village fêtes which last all of the weekend,” Katie reminisces.

“Everybody was sitting underneath the trees on the promenade having a big meal and there was live music and I just thought ‘I’ve made it’.” Katie spent 15 years with the cooperative and worked her way up to export and marketing director, at which point she felt it was time to strike out on her own. The move was partly prompted by her parents who still lived in Ashby de la Zouch, Leicestershire but wanted a slice of France to call their own. Together, the three of them bought a small vineyard in Maury. At first, they were somewhat hands-off. They paid someone to work in the vineyard when they weren’t there and sold on the grapes they harvested.

A notable and impactful change in Katie’s life since she arrived in Aude was meeting her husband Jean Marc. “Jean Marc is a winemaker,” Katie says. “His family has been growing vines for generations, so he knows everything about the local vineyards and the type of vines and how to grow the grapes.” When the couple met, Jean Marc’s work was growing grapes for the Tuchan wine co-operative from the vineyards he owned – a traditional way of working in the area – but, like Katie, he eventually reached a point where it was time for him to transition to independent business.

While his existing land was still tied into a contract, he and Katie decided to see what they could do with her little vineyard in Maury. The only problem was, while they had a wealth of knowledge on growing grapes and selling bottles neither of them had ever made any wine. So they sought some expert advice and were soon making a splash in the industry. “David Morrison, a friend and an Australian winemaker, helped us out and told us what we needed to buy. He came up during the harvest and showed us what to do,” Katie explains. “That first year, we just made about 8,000 bottles from that one vineyard in Maury. We put it into competitions and we got two silver medals from Decanter in that first vintage.”

Age is a virtue

With this success under her belt, Katie bought more land and today owns 14 small vineyards located between 20 metres and 15 kilometres from their village home. She selected places that had older vines as they, according to Katie, produce lower yield but are better quality. A small Fitou appellation vineyard with 100-year-old vines, allowed her to try making the traditional local wine in her own way – an experiment that moved her up on the podium, winning a gold medal from an international wine competition. “With the old vines and some very old traditional grape varieties we’ve had in the vineyards, we’ve made some really, really interesting white wines. They’re not your everyday glugging wines, they’re much more elegant and sophisticated,” she says. “One is made from the macabeu grape variety, which there’s not much left of. When we said we were going to make a dry wine from macabeu, which normally would have made a sweet wine, people told us it’s just not worth doing. But we’ve actually found the style of wine it makes is just absolutely delicious and it gets better as it ages. It becomes heavier and softer and gets a honeysuckle nose to it.”

Palate pleasing as the wines are, the age of the land does cause some difficulties in the winemaking process as Katie explains: “The vineyards are all mainly on hillsides, and because of that they have the most amazing views down on valleys and over castles. But they’re so difficult to work. It’s a lot harder to farm than a modern vineyard where you would plant it in straight rows on the flat to get your tractor through. These are hillside and planted a horse-width apart. We had to buy a 50-year-old Chenillard tractor to be able to plough in between the rows and the picking is all done by hand.

“We also wanted to be organic so there was a lot of conversion and work to be done just to be able to get them back into a happy state where the soils were more alive,” Katie says. While Domaine Jones can’t officially call its wine organic yet, Katie is now working toward getting accreditation from Ecocert which involves having regular inspections over a three-year conversion period to ensure that the vineyards, the winemaking processes and the final product are all aligned with the European organic regulations.

Day to day, Jean Marc works largely in the vineyards and Katie looks after sales. “It works really well because we’ve both got our specialities,” Katie says. “I wouldn’t dare contradict him in the vineyards if he tells me to do something, and likewise for him on the selling side.” They also have a couple of permanent staff to help keep things ticking over. Most of Domaine Jones’s customers are situated in the UK which means Katie usually travels regularly for sales meetings. “That is another really rewarding side of the job, when you’re actually presenting your wines. Sometimes my customers will organise a dinner and cook a meal and I’ll come along and explain the wines that can go with the different dishes,” she says.

Come harvest time, however, Katie must stay close to the action. From August through to mid-November it is all hands on deck to get the grapes off the vines and juiced into the vats. They have a team of pickers who usually come over from Spain each year to work in the fields, as well as more local helping hands. While the wine processing magic takes place in a converted 1905 train shed in Tuchan. “I’m in the winery every single day during the harvest, processing, weekends included,” Katie explains. “All my grapes are handpicked and we don’t rush, we make sure the grapes are really ripe, so they come in really gradually over about six weeks. “I have an individual vat for each vineyard, so we know exactly what quality is coming from each grape variety and each vineyard. You need to pick the grapes, get them into the vat, make sure the ferment starts, and then make sure the ferment finishes properly so that all the sugar has been turned into alcohol. You need to press the red wines to get the skins out and then you need to rack it a couple of times to make it clean. “It’s an amazing time of year because there’s so much hustle and bustle and you’ve got grapes coming in and all the lovely aromas of fermenting grapes. It’s so exciting seeing the first grapes starting to ferment and the juice starting to bubble. “It’s a real team effort from the pickers through to the small team in the winery. You hardly sleep and it’s really full on but the satisfaction at the end is just amazing,” Katie says.

Jean Marc, having left the co-operative now also produces wine with grapes from his vineyard under a second company in which they each also assume the same roles. “We’d already started Domaine Jones and Jean Marc’s vines are younger, and have a higher yield, so we didn’t want to mix them,” Katie says. The only time their grapes mix is for a dry rosé, ‘Me and Monsieur Jones’ that they make as an exclusive product for Naked Wines. “That wine is mainly from Jean Marc’s carignan grapes, and then I add a little hint of the muscat grape from my vineyards. The carignan is lovely and fresh and gives a liveliness, and the muscat adds a floral character and a bit more weight. I just love the name of it. It really sums up what we’ve been trying to achieve working together and keeps that fun element as we have so much fun doing what we are doing.” After 20 years in France, Katie has very much settled into life in a French village and all the demands of winemaking. “It’s not a job,” Katie affirms, “it’s your way of life.”

Winemaking and raising a family in Provence

How to run a successful vineyard in France

Previous Article Win a copy of The Mystery of Henri Pick
Next Article Have you tried these 14 French tongue twisters?