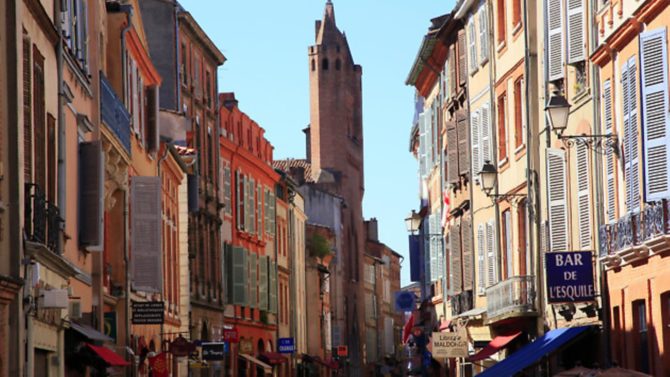 When Sonia Cleary accepted a short-term work placement in the Loire Valley, she locked up her London flat, said ‘goodbye’ to her neighbours and friends, and assured them she’d see them all again in a few months. Little did she know that not long after her arrival in France, she would meet and fall in love with professional chef Simon Quémard, or that her placement would lead to a permanent job, or that she’d still be in France six years later, happily married and living as Sonia Quémard in a sought-after apartment in the centre of Toulouse.

“I did a graduate programme in London and I got transferred,” says Sonia, who studied business with French and Spanish at Manchester University and now works in logistics and distribution for a large construction company. “It was supposed to be for nine months to do a project in the Loire Valley, but here I am; still here. They offered me a really good job after the programme, and I met my now husband, so I never went back. It wasn’t planned that way.”

Once the Loire Valley project had finished, Sonia worked in Paris for a while before moving to Toulouse where she’s been based for the past four years.

“I met Simon in my first nine months and he moved to Toulouse in the end,” she says. “We did the long-distance thing for a bit when I was in Paris, because there’s a fast TGV, but you couldn’t do that in Toulouse; it’s miles away. He’s a chef, so he can easily find another job as there are good restaurants in every city; and Toulouse is such a lovely place, he didn’t mind moving.”

At first they lived together in Sonia’s city centre flat, which they have kept as an investment property and now rent out to tenants, but they were keen to find a home more suitable for just the two of them.

However, their property search was hampered by Simon’s working hours and the fact that the older apartments they were interested in don’t come onto the market very often and are quickly snapped up.

“It was really hard to find a time when we could both visit and if we did both visit, very often the place already had an offer on it or it had been sold. Estate agents don’t really do flat visits at weekends, and they don’t really like evenings either because meal times here are so important, so we were getting nowhere,” says Sonia.

“I applied to the TV programme and we got selected,” she says. “It was really fun to do. The estate agent presenter called me three weeks before we were due to film and took down all my criteria: what I was looking for, the budget and everything, and then they spent three weeks finding places that matched what we wanted.”

They filmed for three days and took Sonia and Simon to look at four places, including the apartment which is now their home.

“What we really wanted was a place in one of the old, period French buildings with the floorboards, the chimneys and the brick,” says Sonia. “The estate agent presenter found us this flat on one of the big boulevards in the centre of Toulouse with big windows and a balcony. It wasn’t even for sale.”

The apartment belonged to a landlord who’d rented it for a long time, but who did eventually plan on selling. During her search for suitable homes for Sonia and Simon, the presenter heard about the apartment, and asked the landlord if he would consider bringing his plans forward. Fortunately, he agreed. They loved it immediately and moved in during the autumn of 2013.

Their apartment is in a great location, but was a bit tired and unloved from its years as a rental property. They have done a lot of redecorating and have plans to replace the bathroom and put in a new kitchen, but in the meantime, they love living in the centre of this lively and vibrant city.

“It’s really well located,” says Sonia. “We’re near the Mediterranean; we’re near the Atlantic; we’re near the mountains; and the weather is really good, which coming from Durham as I do, is totally different! We do a lot of hiking and a lot of skiing, and we’ve got the Pyrenees just an hour and a half away. Barcelona is just three-and-a-half hours’ drive. There are massive advantages in terms of location. It’s a big city but it’s pretty; it’s really attractive, and it’s not so big that you think you’ll never get to know it. There are loads of bars and restaurants; it’s really young… it’s pretty good all round really!”

Their home is also ideally situated for Simon’s work, and there is a fantastic market right outside their front door, six days a week.

“We have a market in the street outside our flat, which is on every day apart from Monday. It’s practically on our doorstep,” says Sonia. “It’s quite an advantage for my husband, because he’s obviously obsessed with fresh food and it’s right there.”

Regular visitors include UK-based friends and family, including her identical twin sister and her older sister plus children, who make good use of the transport links between Toulouse and London. A direct flight to Newcastle from Toulouse is high on all their wish lists, but seeing her loved ones regularly almost makes up for how much Sonia misses everyone back home.

“We have a lot of French friends. I have English friends, too, but I still really miss home,” she says. “I have an identical twin and we are really close; and another sister, who has two children. My whole family is really important to me but they come over all the time: we’re in the centre of town, we’ve got a spare room and it’s a nice holiday weekend especially from London on the easyJet flight!”

She has met a lot of people in Toulouse through an association called English in Toulouse, which was set up for English and French people who meet up regularly to speak English.

“They go on outings and meet for conversations in the pub and organise all sorts of activities for the group,” says Sonia. “I’ve met a lot of people this way, and they’ve made me one of the hosts at the pub on Fridays. If people don’t know anyone, they can find one of us; it’s really good. It’s really sociable, and there are people from all different backgrounds. I’ve met a lot of people through that. It’s good fun, and it’s a nice way to meet people who already have a love of language in common. It’s a good way of building a community in a big city; a great way to help people feel at home.”

And it’s clear that for now Sonia and Simon are happy to call Toulouse home too.