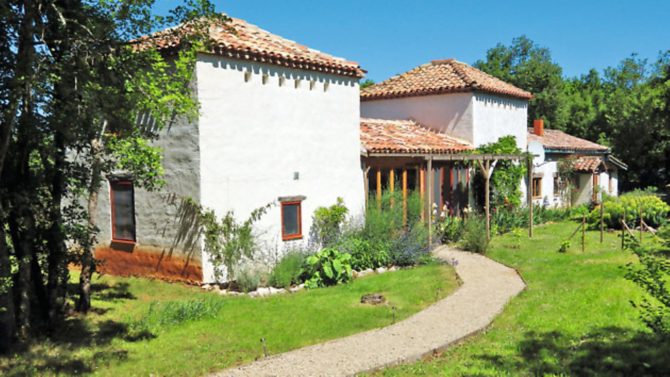 Meet the expats who have transformed a hunter’s woodland cabin into a self-sufficient, eco-friendly B&B in Tarn-et-Garonne

Twenty years ago, Laura and Sid Havard packed up their life in the UK and set off in a converted bus with their then two-yearold son, Jim, in search of tranquillity and sunshine – arriving in south-west France’s Tarn-et-Garonne department, they were smitten. Today they run the Green Chambre d’Hôte: an organic, eco-friendly B&B and gîte, which nestles in meadows and mixed woodland, not far from the medieval town of Saint-Antonin-Noble-Val; a wildlife haven and a magnet for those eager to experience a slice of The Good Life in France.

“We left England in 1994 and we just wanted to find some space and a better climate,” Laura remembers. “It was sheer fluke that we came to this area. It’s very beautiful – the forests, rivers and gorges are stunning.”

As they lingered to explore the department, a friend told them about a hunter’s cabin for sale, set in woodland. “It was a pre-fab – it looked like a 1960s council garage,” laughs Laura. “It was 20 square metres but it came with 10 acres of land. We fell in love with it and we bought it. It’s just fab here – it’s quiet and it’s beautiful. Our nearest neighbours are 750 metres in any direction and because it’s in a zone of non-construction, we can never have any neighbours nearer than them.”

Initially, they were not even sure they would be able to build on the site, but they loved it so much they decided that if they couldn’t get planning permission, they would keep it for holidays.

“In the end we were really lucky because the previous owner had been paying taxe d’habitation on it, and because of that, they couldn’t refuse us the planning permission.”

The plan right from the beginning was to create an organic, eco-friendly, sustainable home in France for themselves and their son, and to this end, they started small and have gradually expanded; taking 10 years to design and build what is now a light, airy and spacious family home and business, which is warm and welcoming in winter and cool and serene in summer.

“We built it in stages,” says Laura. “Initially we applied for planning permission for just 20 square metres. We didn’t think we’d get it but we did. It was really meant to be. We then did four extensions over the years making it bigger bit by bit until we are where we are now.”

And when they say they designed and built it, that’s exactly what they mean

“We designed it ourselves and we built it all ourselves too,” says Laura. “We weren’t builders, but we learnt the hard way. Sid did the electrics and the plumbing, which was brilliant. I did all the block laying, Sid did all the carpentry, all the roofs; and we just did it a little bit at a time.”

The staged construction process was the key to their success, giving them time to re-energise in between builds and gear themselves up for each next step, until at last the finishing line was in sight.

“It’s funny but over the years you forget all the blood, sweat and tears that went into it and I look at it now and think how on earth did that get here,” says Laura. “It’s a lovely space. It’s got masses of insulation, so it’s very warm in the winter and it’s cool in the summer, and because we did it a bit at a time, we were able to get masses of reclaimed materials and take our time to perfect it. We picked up lovely old tiles and a lot of the timber in the A-frames and the ceilings is from our own woodland.”

This woodland also provides fuel for their wood-burning stove, which they picked up second-hand from homeless charity Emmaüs.

“It heats the whole house,” says Laura. “We have recently bought another one to heat the gîte which we use in the colder months of the year. We used to cut all our own firewood, and although we have enough land to be self-sufficient in wood, we decided that as it’s incredibly hard work, we’d give ourselves a bit of a break and these days we buy in approx 50% from a local wood yard.”

Sustainability has always been their watchword, and so when the power company wanted €63,000 to connect them to the mains, they decided to look for other options. “We did a lot of research on solar power and started off with a small number of photovoltaic panels and a few batteries,” says Laura. “We’ve built that up over the years, and then last year we added a small wind generator and it’s fantastic. Now by 10 o’clock in the morning on a sunny day, we’re throwing away electricity.”

The organic element of their enterprise has been a lynchpin too, and as luck would have it, their land has never been treated with artificial fertilizers or pesticides. “The land here has always been organic,” says Laura. “It’s been woodland since the 1920s, and prior to that it was used for part-time sheep grazing. It’s a perfect base for an organic garden.”

And what a stunning garden they have created. Starting from scratch and carving out a sunny clearing among the trees to create space and a view, they have built raised beds for the vegetable garden, constructed two raised ponds connected by a stream and have planted masses of flowers to bring birds, bees and butterflies into the garden.

“The garden really was a labour of love,” says Laura. “When we came here, it was just thick woodland; you couldn’t see the cabin from the road, we had no view and the trees were thick across the whole property. We cleared for weeks and by the time we’d finished, it was like a bomb site; there was no green, but it was incredible, the seeds must have been in the soil and now we’ve got so many wildflowers. We’ve got orchids and honeysuckles and little autumn squill that come up. We didn’t put down any grass seed at all; it’s totally regenerated by itself.

“We came here and thought that we would garden in an English way, but that didn’t work at all because we have very cold winters, very hot summers and it’s very dry here in the summer. As a result the garden has been reworked probably half a dozen times so that it works now. The raised beds are essential because we’re on bedrock so we’ve got maybe two inches of soil. To plant anything you need a pickaxe, a big metal spike and a sledge hammer!”

They have five raised beds, which cover a total of 55m² and provide them with a wide variety of vegetables and fruit; all kept pest-free by their three friendly ducks.

“We’re pretty self-sufficient with the veggie patch,” says Laura. “We don’t grow potatoes because we haven’t got enough room, but we grow a vast amount of veg and we have a big surplus which I bottle, and that keeps us going all year. We’ve also got lots of fruit. We grow a lot of raspberries, strawberries, blackcurrants, greengages. It’s a wonderfully productive garden. I make masses of jams and jellies, and I make wine occasionally if I have a really big surplus; and we give a lot away.”

Their guests are also beneficiaries of the bountiful garden. All meals are freshly prepared, vegetarian, and organic and use as much produce as possible from the garden, which includes fresh eggs from their chickens.

“I get a real buzz out of it,” says Laura. “Doing food for people is really great. Early in the year we have lots of asparagus and masses of strawberries; they feature quite highly when they’re in season. It’s great to give people the chance to taste fresh food, or just really different food.”

Their now-adult son Jim lives in his own cabin on the property with his French girlfriend, Lisa. They have their own garden and, like Sid and Laura, are committed to organic, sustainable living. Now entering its fifth year, the Green Chambre d’Hôte attracts guests from all over the world and many return year after year; attracted by the eco-friendly ethos found here.

“I think we’re hunted out because we’re organic and it does appeal to a certain type of person looking for peace and quiet,” says Laura. “For us, it’s a really good way to meet people. It keeps us busy and people love it, and because we can give pleasure to other people, it makes the work that goes into the place all the more worthwhile.”