Ian Moore: proving my Frenchness with my new French passport 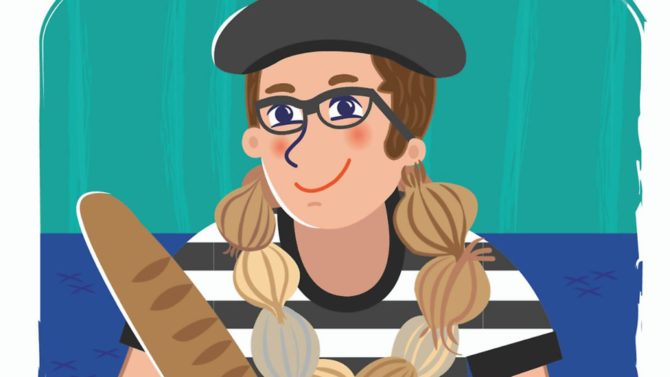 Having acquired his French passport, Ian Moore is eager for a bit of pomp and circumstance to celebrate and prove his Frenchness

“Er”, I said, gesticulating myarms more than normal,”I am, er, staying inyour country for,er deux jours, two dayze.” It was, in truth, the worst French accent since the heyday of ‘Allo ‘Allo!

The portly immigration officer sighed and looked me up and down. Neither of us knew why I was affecting a French accent, me less than him probably. I had just landed in Manchester, I would be there for two days performing stand up and was travelling light, that is, I was in stage wear. A tweed Edwardian frock coat to be exact, with a paisley cravat and I looked about as French as William Rees-Mogg.

I hadn’t planned to pretend to be French, not verbally like this anyway, it just sort of happened. It was the first time using my recently acquired French passport and something inside of me felt the need to live up to it, like a newly qualified driver eager to show off an unnecessary three-point turn.

That I was French at all seemed like a clerical error. I won’t go into the obvious reasons why it had to be done, but the administrative hoops of fire that had been gone through, the unexpected police visit at home to check my papers, the language test where I ended up arguing with the examiner about a hypothetical dog that needed re-homing and being told by another police officer that my application didn’t stand a chance, and why? Because it was my first application, that’s why.

Janine Marsh: Anything can happen on a promenade in rural France

“We could have a huge lifestyle improvement for the same money, if we were just a bit smart about it”

But French I am, and sometimes you just have to show these things, almost to prove to yourself that you’re not a massive fraud, a conman with a string of gossamer thin personalities. “And why are you here?” The immigration officer clearly wanted further proof of my terrific accent.

I got the official letter of notification last summer, just before the football World Cup final, and at the time it was quite emotional, the nationality thing, not the football, because you don’t ever expect to have to change nationality.

I grew up very English and very Francophile, those French supermarkets can turn a kid’s head, but I never had the ambition to actually be French. I was also disappointed by the lack of event. It was just a letter informing me of the decision, but no fanfare and I love a bit of fanfare.

I shouldn’t have doubted the French desire for a bit of ceremony, they’re my people after all, and the invite finally came through a year later. And a proper ceremony it was too. Uniformed soldiers, the préfet of the département conducting the ceremony, official photographers and embossed certificates. It was flag-waving, La Marseillaise-tastic and what made it even more special, and it was special, was that the mayoress of my little town, had made the effort to come too.

She hadn’t told me in advance, I hadn’t even seen her since we informed her of our decision to open a chambres d’hôtes, but she was there to hand me my French dossier. It was a true welcome. But there’s always an element of you, lurking beneath, that you are a bit of a charlatan, that you’ve done this for political, family security reasons. An old-style European monarchy arranged marriage if you like. I feel like Gordon Jackson in The Great Escape, that I will let the mask fall much too easily.

“A glass of rosé?” the mayoress asked. “I’m driving,” I replied. It seemed such an un-French answer and she couldn’t hide her disappointment.

“So am I,” she said and we walked back to our cars.

I had been running late so mine was slung across three spaces and had a parking ticket to boot. Her mood changed immediately. “Ah, bienvenue chez nous!” she said and kissed both cheeks.

It’s the little things, you see, not a dodgy accent.

Ian Moore: The secret to successful back-to-school shopping in France