Ian Moore: don’t ask me for advice on living in France! 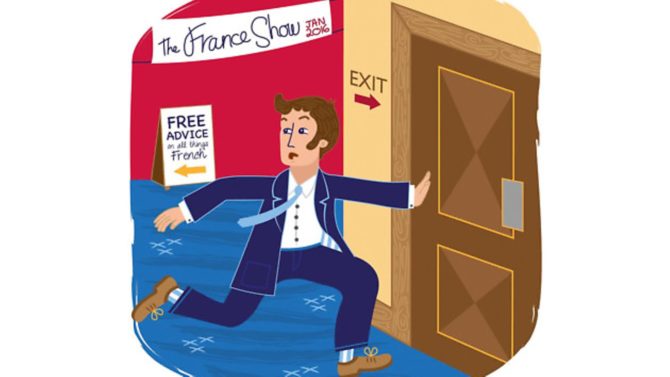 After living in France for several years, Ian Moore finds that people are turning to him for advice but he doesn’t know the answers!

It is one of the benefits of adulthood that one can garner a number of responsibilities; take credit and acclaim for one’s achievements up to that point, be admired even, have one’s wisdom sought out.

It is also one of the benefits of adulthood to leave such glory-making to those that deserve it and though nominally, and certainly according to French law, I am ‘head of the household’, this over-achiever – and I use the term lightly – can usually be found working away from home and shuffling around his hotel room in his pyjamas trying to work out where to plug the kettle in.

I have been very lucky.

If you were at The France Show and came armed with questions, you almost certainly left with answers.

Ian Moore: how many times should you kiss in France?

On the other hand, if you read my books on living in France and look for any insider tips or knowing shortcuts I’m afraid you’ll be sorely disappointed as I stumble from one ignorance-inspired ineptitude to the next, be it goat husbandry or delicate medical matters, never learning my lessons, never seeking the advice of others and buffeted about by French bureaucracy like a pinball.

It has come as something of a shock then, and certainly contrary to all the evidence, to discover that I am now considered something of an expert in all things ‘expat in France’. The responsibility is frankly tarrying, and not just because the idea of responsibility brings me out in a cold sweat, but because of the potential havoc that could be wrought.

In the days before barcodes, I was once sacked from a job as a cashier at a large supermarket chain because I was in the habit of just guessing the price of things. Some people would have been over-charged certainly, and by the same token some would have got lucky, but either way my attempts to “game show things up a bit”, and enliven a dull Saturday job were considered anarchic and “not in everyone’s best interests”.

My point is, I haven’t really moved on. ‘Making things up as I go along’ is something of a lifelong habit so when people ask me serious questions relating to, say, taxe d’habitation or conjugating the imperfect tense of the verb méconnaître, I will almost certainly look knowledgeable.

My answer may even sound authoritative but inside my head there are probably alarm bells going off, or the opening bars to Daffy Duck’s theme tune and the brain node equivalent to mass hysterics. As that supermarket found out, I am not to be trusted.

A friend recently asked for my counsel on the safest way to transfer money abroad and when the deafening laughter of my bank, parents and wife had died down in response to me being asked any sort of financial advice, I could think of nothing more sensible than swallowing bundles of cash and then swimming the Channel. It seemed like a much more exciting prospect than using a respected trustworthy currency house which the so-called ‘experts’ are wont to recommend.

Another friend asked me about the best way to approach the labyrinthine Kafkaesque nightmare that is French bureaucracy, and when my response was to prepare for the kind of rope torture that James Bond endured in Casino Royale, I was onl partly joking. I’m not sure anyone should proffer advice on how to deal with les fonctionnaires.

Happily though within the pages of magazines like Living France and French Property News and at events like The France Show, there are genuine experts; qualified, sensible individuals and organisations there to help.

But seriously, if you want my advice, don’t ask me.

Previous Article What’s it like to live in Cordes-sur-Ciel?
Next Article How to prepare for your French mortgage application