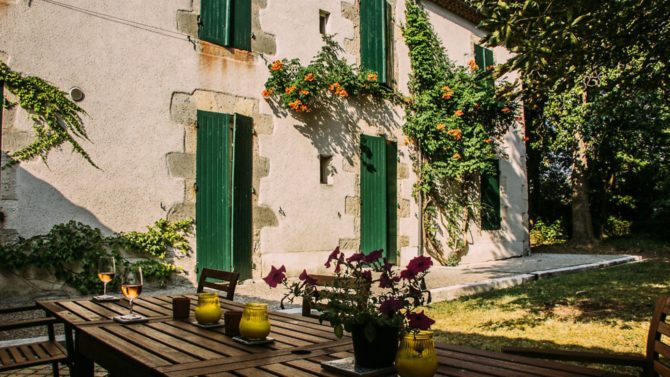 Sitting here in our garden, shaded by the 160-year-old horse chestnut trees, watching the bright orange trumpet flowers on the climbing campsis chinensis cast shadows on the green shutters, I pinch myself – again. Can this beautiful home really be ours?

We can’t believe our luck. How on earth did two self-employed creatives living in rented accommodation in Scotland with no savings and a fair amount of debt manage to end up buying this amazing house in south-west France within the space of a couple of years?

After checking out a few areas in France we agreed on the Nouvelle-Aquitaine region as the ideal location for our destination and, in April 2016, Colin and I embarked on our risky adventure. We made the move from east Lothian, in Scotland, to Lot-et-Garonne to rent a place while searching for a property to buy.

Why risky? Well, firstly, we didn’t have any money for a deposit and, secondly, we didn’t want any old little house for the two of us to live in. No, we had our hearts set on something very specific. Something much more ambitious. The perfect place for an artist retreat.

We already had a name for the place, Studio Faire, and a clear aim. We wanted something that would be a draw for all types of creative professional: self-catering accommodation in spacious, inspirational and calm surroundings, with great studio space and support from its experienced owners (me, a visual artist, web designer and exhibition coordinator, and Colin, a digital media professional, portrait photographer and drummer).

How we found our perfect French property

How to find your perfect French property from your sofa

The initial move was pretty simple. We were both able to continue with sufficient work from our Scottish clients to keep a regular income, so it was just a change of location really. Oh, and a massive language barrier, of course, as we were just beginners in French.

Once we had made it to France, the next challenge was to raise funds for a deposit and find the perfect place. We started to take on as much extra work as we could and to save every penny. We also asked for support from friends, family and work mates through a crowdfunding campaign – small monetary contributions in return for various ‘perks’.

We were absolutely bowled over by the generosity of our contacts as we successfully raised £8,500. We wouldn’t be where we are today without their contribution and we are ever so grateful for their support. We still had a long way to go but there was no turning back after that.

Then came a completely unpredictable and unexpected turn of events, which resulted in my parental home being sold and us being given a generous sum of money from my family. This not only changed our timeline, but also our budget.

Now, with Colin’s steady income that would cover monthly mortgage payments, the crowdfunded money to secure the compromis de vente and the sum from my family to arrive in time for the remaining deposit, we felt we were ready to take the leap into the French property market.

Over the past couple of years, we had built a good relationship with Caroline Hubbard, an agent with Leggett Immobilier. She was clear on what we were after and, as soon as she saw the house knew she had to show it to us. Perhaps this could be the one for Studio Faire? It had enough bedrooms, a huge barn which was just ripe for converting into artist studios, and a stunning mature garden, all a five-minute walk from the centre of the culturally active town of Nérac. There was only one problem – even with our newly increased budget, it was far too expensive for us.

Stepping through the front door, the first word to escape my lips was “wow”. Such space, such character. As room after room was revealed, I started to feel confused and forlorn. Why on earth was she showing us exactly what we wanted, but couldn’t afford?

As ever, she had a plan. At the back of the house was a walled garden and, beyond that, what I can only describe as a park, a huge expanse of land with mature fruit trees and a large amount of space. This was included in the sale price… but it didn’t have to be. Another option was that this part be sold as three building plots, thus dropping the price of the house dramatically.

Aha, interesting! But that would mean that we could potentially have three new houses built right at the bottom of our garden. What about the spacious, calm environment we want to offer our visitors? Did we want to risk having a noisy neighbour (or three) just a stone’s throw from the house?

Quiz: which type of property should you buy in France

We decided it was too much of a risk and walked away from this dream space. However, after viewing several more properties over the following months, we kept coming back to this one in our discussions. We could never agree on another and we both adored the first one.

“Shall we go back for another look and just make them a really crazy offer?” I asked Colin. What did we have to lose? Standing once again in the park at the back of the garden we realised just how massive it was. It would be a lot of work to look after it. Did we actually need it? Might we manage with the main garden without feeling disturbed by the neighbours?

“What if you just keep a bit of it?” Caroline suggested. “Enough for a buffer from the new neighbours?” Genius! Our crazy offer might not be as crazy as we thought. We put in our offer: €110,000 under the asking price, to include a 14m strip of the park. A bold request, we thought.

Our offer was accepted the very next day. We couldn’t believe it. We were walking on cloud nine. All we needed now was a mortgage. No problem. Let’s go…

We immediately hit a problem. Even though Colin’s income was regular and steady, he was still self-employed and didn’t have a monthly salary. And though he had been working with the same company for six years, his French financial records did not yet cover a full year. My income fluctuated from month to month so couldn’t be taken into consideration at all.

After four rejections from our local banks, our dream started to feel like a fantasy once more, but we were adamant that we would try everything we could to secure the mortgage and make this happen. We decided to employ the assistance of a broker.

Leggett Immobilier recommended Ace Credit, based in Bergerac, so Colin and I grabbed every piece of paper we could think of that they might need and jumped in the car. After describing our situation to them they scratched their heads but said that they were willing to take on the challenge and had an idea about where to start – with the independent Banque Tarneaud. But they were going to need even more paperwork from us.

By the time we had finished sending them every single document we’d ever owned, we felt satisfied that the job was in good hands and sat back to wait patiently. We first saw the house in June, made our offer in September and it was now November – maybe we would be in the house just in time for the Christmas holidays.

How to get a French mortgage

What are the differences between French and UK mortgages?

November ended and December passed in silence. What if they had said that they would speak to banks on our behalf but now were doing nothing? What if we had messed it up by speaking to the four major banks ourselves rather than employing a broker from the start?

By mid-January we were getting twitchy and so we phoned them to see how things were progressing. “We’ll let you know as soon as we hear anything,” they said. Well, at least they hadn’t forgotten about us.

January passed and we were now into February. Then came the call. It was good news… we thought – the broker who called couldn’t speak English and Colin wasn’t entirely confident that he had understood her correctly. She would get her English-speaking partner to call back at 3pm. We waited, stomachs churning, unable to concentrate on anything else. The call came at 3pm.

We finally moved in on April Fools’ day, no joke. The house was clearly much loved by the previous owner, Monsieur T, his children and even his parents before him, as it had been in his family since 1960. It was a family home then: a father, mother and two boys. They owned this house and another smaller house. When the parents died, the boys drew straws for the two houses they owned. We think that Monsieur T got lucky when he won this one in the draw – and we feel very lucky too.

Previous Article 8 of the most romantic places in France
Next Article Dream French properties: January