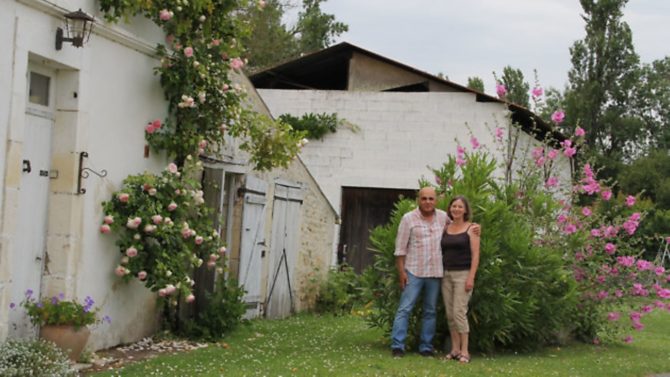 Amelia Bassiti and her husband Kourosh moved from Aberdeen to Charente-Maritime eight years ago in search of an outdoor life and a garden to tend in their retirement. They share their gardening experiences on the blog A French Garden and tell us how they transformed their garden

What was the garden like when you first arrived?

The plot is about 4,000m² with a small garden at the front and the back garden running down to the river Seudre. When we moved here there were only

three old fruit trees at the back and an impenetrable woody area near the river choked with brambles and weeds. there were virtually no flowers as the previous owners had kept dogs, goats and chickens.

How have you developed it?

We bought the house in 2001 and moved here permanently in 2006. In the meantime we were keen to start on the garden. my husband started to plant some trees hoping that these would survive during our absence and be more mature when we eventually came to stay. he was particularly keen to plant fruit trees as he had happy memories of his parents’ country garden. The trees formed the backbone of the emerging garden and more were planted as it evolved. We now regularly collect our own apples, plums, apricots, cherries, as well as strawberries, raspberries and blackcurrants, salad and vegetables.

What grows well in your area of France?

The underlying rock here is limestone and the soil has a tendency to be sandy, so most plants thrive apart from those requiring acidic soil. The area is well known for its hollyhocks and sunflowers and the farmers around us grow a lot of grape vines which are turned into Cognac and Pineau.

What tips would you give to someone with a garden in Charente-Maritime?

What do you enjoy most about your garden?

As we have introduced more plants and trees, more and more bees, butterflies, birds and other wildlife have been attracted to the garden. I have become particularly interested in the great number of beautiful solitary bees that visit and nest in our garden. They kept me company among the flowers so now I always think of the bees when I make additions to the garden.

afrenchgarden.wordpress.comAre you a keen gardener in France? Email us!

Previous Article How to move to France with children
Next Article Family-friendly Les Gets, Haute-Savoie