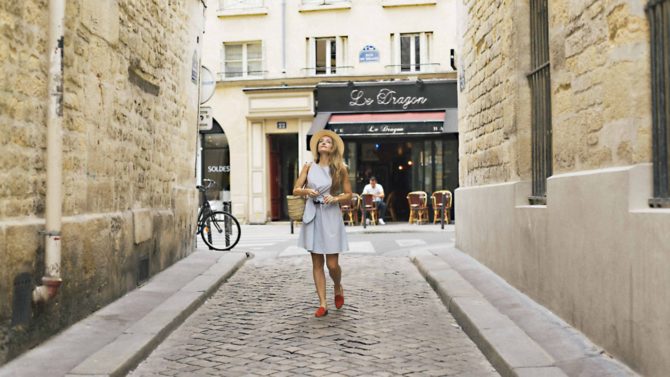 On the eve of 2014, I realised that my dream of inspiring people and of having complete creative freedom over my life could be realised by teaching French via an online platform.

I was living in Los Angeles, working as an actress and teaching French. My contract with my agent was up and I elected to not renew it, focusing instead on creating French is Beautiful.

Paris will forever be the city that led me to create a business that inspires people in a way that I am so very proud of.

What attracted you to Paris?

I was called to Paris by music. I was studying musicology at UC Berkeley in California and greatly admired the French way of playing piano and composing music.

Paris was the ideal choice for me in order to become ‘fluid’ in French and to learn to play the piano and compose like the masters that I admired.

Speaking a language ‘fluidly’ is how I describe expressing one’s personality while speaking a new language confidently.

Did you know the city well?

I first went to Paris in the summer of 1999. I studied piano at l’École Normale de Musique, French Literature at La Sorbonne and French translation at IES Abroad (the organisation that facilitated my year abroad, which I recommend highly).

I continued to visit Paris as much as I could once I returned to the States and eventually moved to NYC where I worked for Opera Gallery, a French-owned company. I knew Paris well when I moved here in 2015 and still felt deeply connected to French language and culture.

Did you find it easy to find somewhere to live?

It has been an interesting and inspiring journey making my home in Paris over the last three years. Settled into my apartment in the Marais, feeling as though I have (finally) mastered the French paperwork process after many educational twists and turns, having my visa renewal recently under my belt (champagne!), having a community of friends, colleagues and merchants, I feel at ‘home’, in the deepest sense of the word. For years, I fantasised about ‘one day’ living in France.

What do you enjoy most about living in Paris?

The more times I return home to Paris, I am struck by her gentleness, her douceur. Paris feels like a village, although she is a metropolis. She is chic, although she is busy, calm although populated, classic although carefree. Paris is perfect for someone like me who loves the largest of cities and the quietest of corners in the countryside, equally.

One of the most beautiful aspects of living in Paris is one’s proximity to other treasures in France – Bordeaux is a short train ride away. I loved it so much the first time I went that I stayed for a month.

It has taken me three years to finally embrace the French rhythm of life. This summer, my French friends celebrated the fact that I had ‘finally become French’ based upon the amount of work-free travel I enjoyed. It was a challenge for me at first, working primarily with clients in the anglophone world, to faire le pont (the French expression for making an extra long weekend out of a holiday occurring on a Tuesday, for example).

Living in France has shown me how to be balanced and productive.

What advice would you give to expats thinking of moving to Paris?

If you are thinking of moving to Paris, I have two essential pieces of advice for you: get (really) organised and count on making friends slowly.

French paperwork has a poor reputation among French citizens and expats alike. Some of the most maddening aspects of French paperwork, such as being asked for the same documents every few months, can be simplified by keeping copies on file at home or with you when you travel.

Today, I travel with a USB key that has all of the usual suspects on it in PDF form should I need to send anything to France while abroad, such as: passport copy, carte de séjour copy, recent proof of residence (this type of supporting document is only valid for three months in France).

Did you find it easy to settle in?

The French do not approach every new encounter assuming that the person in front of them will turn into a lifelong friend, as we often do in Anglo-Saxon culture. Of course, I am generalising, but it is the best way to point out the difference between French and anglophone culture when it comes to making new friends.

You may get along very well with a new Parisian acquaintance, but do not take it personally if they do not ask you to meet for drinks right away and definitely do not be disappointed if it takes a few months for them to invite you over to dinner.

When they finally do, it will be worth the wait. A French friend, once a friend by their terms, is a friend forever.

Fantastic flea markets and where to find them

The clever way to invest in a Paris property

My favorite restaurant in Paris for a special occasion is Chez Allard (restaurant-allard.fr/en) at 41 Rue Saint-André des Arts. Perfect for classic French fare, it feels like you are in someone’s chic salon tucked away in the 6th arrondissement.

It opened in the 1930s. I first went with a French-American amie âgée and am convinced that one of the reasons that I adore this restaurant so much is thanks to the experience of hearing the stories of its early years through her eyes over the dish she had enjoyed there decades before – duck with green olives for two.

What is your favourite market in Paris?

Although the flea market at Saint-Ouen is more well-known, my go-to flea market, and where all of my plates and wine glasses are from, is the Puces de Vanves (pucesdevanves.fr/) at 14 Avenue Georges Lafenestre in the 14th arrondissement.

Open Saturdays and Sundays, it is a more authentic, reasonably-priced marché.