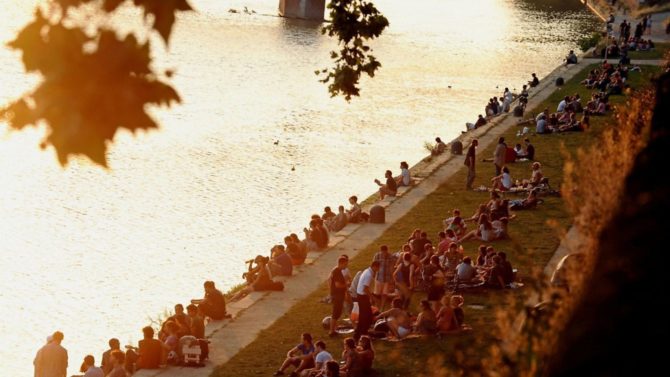 When Chris Bockman moved to Toulouse as a broadcast journalist, little did he know that he would collect enough material for a book of his own

Chris Bockman was living the busy life of a broadcast journalist in London when his personal and professional lives aligned to bring him to France.

“I was working for Reuters and it bought a share in a company in Lyon that was looking for British journalists there. My girlfriend was moving over to France at the time as well,” explains Chris.

“She is French but was working in a school in London and she wanted to make the switch to Toulouse. I was visiting often and doing work projects in Lyon and soon I moved over full-time myself,” he adds.

Although Chris and his girlfriend did not stay together, Chris’s love affair with the south-west of France continued to blossom. He fell for the beauty of Toulouse and discovered that the city, which has a population approaching 500,000, was just the right size for him.

“I grew up in the London area but I found that London was a bit too big for me, I preferred to be in a big provincial or regional city. Toulouse itself is extremely attractive. It is less well known than places like Marseille, Lyon or Bordeaux, which I think is a major mistake actually. But it is achingly beautiful when you come to see it. And the weather here overall is pretty amazing. People call it the pink city because of the bricks that are used here, and when the sunlight hits those bricks in the evening I can’t think of anything else more beautiful,” he says.

As a broadcast journalist, Chris found the dynamic city, which is also a major business and manufacturing hub, had a lot to offer him.

“Toulouse is kind of like the aerospace capital and also the rugby capital. There is a constant need for camera crews and equipment to cover the rugby which is on every weekend here,” says Chris. “And then of course Airbus and the aerospace industry require camera crews all the time to film high quality videos.”

With years of UK journalism experience under his belt and having gained an understanding of the French system from his work in Lyon, Chris decided, in 2001, that it was time to set up his own business, which he would run largely from his 60m² city-centre apartment.

“I set up as a press agency, which is basically a catch-all phrase for providing stories for broadcasters, anywhere really, about events taking place in my region in the world. I didn’t have full-time employees but I hired people, like camera operators and technicians, on a regular basis. I work from home and then I use a production facility in Toulouse where there is very good equipment when I need a special type of editor or if I need live facilities,” says Chris.

There was of course, frustratingly for Chris, some admin to deal with before he could dive into work at his press agency.

“There are a lot of different administrative organisations you have to talk to when you do first set up. And of course that’s the last thing you want to do. What you want to do is to try and actually get work and contact clients. You have got to make sure that you can be ready for registration payments, for example. But once you actually resolve that, in the end, as long as you do have business, it all kind of fits in to order after a while,” says Chris.

Author Hannah Fielding on finding inspiration on the Côte d’Azur

7 villages in Tarn you need to visit

The transition to France was made easier by Chris’s good command of the French language, something that was helped by having had a French girlfriend. But, Chris says, his introduction to French had begun when he was much younger.

“When I was about 12 years old my parents lived in Paris for a bit. They sent me off to school there and I had no choice, I had to know how to speak some French. It wasn’t anything like as good as it is now but I had a foundation obviously,” he says. Once the initial admin was out of the way and Chris was at the helm of his own company, he did manage to quickly establish clients and was also able to branch out from reporting and use his international experience in new ways.

“I very quickly got a contract with the BBC. For the first 15 years or so I was exclusively working as a broadcast journalist and then about six years ago I began helping a lot of companies over here with their communications strategy with international media.”

Through his years reporting on the goings on around the south-west of France, Chris also found that he had a real soft spot for the quirky stories he came across.

“I am a reporter so most of the stuff I do is hard news and some dramatic news, but overall what I enjoy is doing the off-beat stories,” he says. “Whether it’s a story about pig squealing or the snail racing championships or stories about truffle pickers or oyster thieves, I love them.”

He decided to pick out some of his favourite stories that he had covered and has now put them all together in a book Are you the Foie Gras Correspondent? is written from Chris’s perspective as a Brit discovering the quirks of life in France, written with a wry humour.

To answer the question posed in the title, no Chris did not technically ever have the role of ‘foie gras correspondent’ but he did cover a lot of stories about the industry as Gers – the neighbouring department to Haute-Garonne of which Toulouse is the capital – is one of the leading departments for foie gras production. While Chris would report on these stories regularly, he did not partake in the delicacy himself as he is actually a pescatarian, something he says is slowly becoming more popular in France.

“I actually think habits are changing more and more. People in France are eating a lot less meat. And there are plenty of amazing vegetables and fruits you can eat and where I live there is a superb food market, one of the biggest outdoor markets in France, and it is open six days a week, so we are very well served,” he says.

Outside of his working life, Chris enjoys going to Flamenco concerts in Toulouse, and also makes the most of the varied landscapes surrounding the city.

“In winter I am attracted by the mountains. I belong to a cross-country ski club and it is an hour-and-a-half to the Plateau de Beille in Ariège, which is a great cross-country ski resort. We have to leave at seven in the morning on a bus but it means you can be on your skis for 10am which means I’m happy,” Chris explains.

In the summer months it is the countryside that holds the allure and happily for Chris he has his own place to head out to.

“Toulouse gets so hot in July and August, it can get to 40 degrees. Like many Brits I bought a run-down cottage in Tarn, which I did up slowly. It is only 90km away in a beautiful medieval village called Penne and it is just great to be able to enjoy a bit of an escape there,” says Chris.

“I bought the house years and years ago for the princely sum of about €22,000 and I had to put €60,000 into it to make it liveable but it’s very beautiful. One of the first things I had to put in was heating. I bought it in summer and I remember the estate agent telling me ‘it’s the south of France, you probably don’t need much heating’, but it actually gets much colder here in winter than it does in London for example,” he explains.

The cold winters have not put Chris off though and having been in the south-west of France for around 20 years now, he says he has no plans to move away.

“There were a couple of times that I had job offers back in the UK or Paris but I am very much wedded to the south-west.”

Previous Article Does UK probate apply to a property in France?
Next Article Restaurant in France named best in the world