Expat life: Setting up a B&B in Béziers 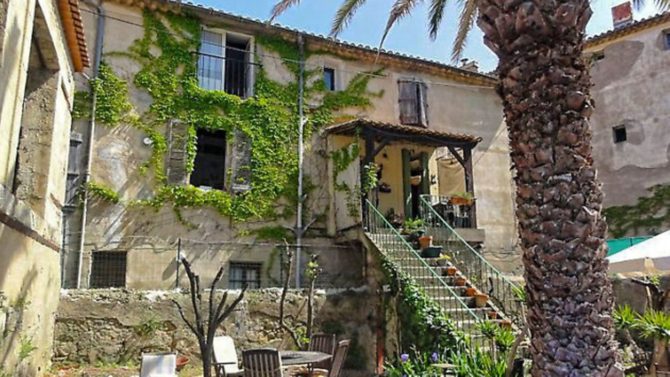 Expat Mark Binmore and his partner Ben moved from London to Béziers in the south of France and set up a B&B, we find out how they did it and why they chose Béziers

The allure of the Good Life and the charms of the beautiful Languedoc-Roussillon town of Béziers in the south of France ensnared Mark Binmore and his partner Ben. They gave up their jobs as pub landlords in London to run a chambres d’hôtes in the coastal town.

Tucked away in a tranquil spot on the outskirts of the centre ville, their B&B Maison de l’Orb is in an enviable location on the River Orb. However, Mark admits that moving to France and buying this beautiful old house wasn’t part of a grand plan: “I didn’t want to reach old age and wish I’d done this when I was younger,” he confesses.

He and Ben loved their city life in London, but felt that things were not changing for the best in the pub trade in the capital, and they wanted a change too. They considered various locations around the world in which to start a new adventure, but ended up choosing France because they had friends there. Mark estimates that it took them about two years, “from thinking about things to actually moving boxes and crates into the house”.

Thanks to its Mediterranean location, Béziers offers one of the sunniest climates of the whole of France with more than 300 days of sunshine every year. Hot summers and mild winters make this area of the south popular with tourists, but it isn’t overcrowded. With its excellent transport links – there is an airport 15 minutes from the centre of town and good train services – Mark felt sure that it was the ideal location for a chambres d’hôtes.

The Maison de l’Orb was the first house that Mark and Ben saw, having already moved to France. They had rented to give themselves time to search for a property, and were the first people to see the house, the day it came onto the market. “At first glance, I wasn’t so sure, as the main door opens onto the road, but when we got inside and saw the huge Moroccan tiled corridor leading upstairs, I kind of got hooked,” admits Mark, with a fond smile.

The couple wanted to be sensible about finding ‘the one’, so they saw a further 15 properties, but kept coming back to the Maison de l’Orb, a handsome mellow stone house built in the 1800s. During the Second World War, the house was a ‘safe house’ for those fleeing the occupied zone, and the cellars were used by local resistance groups.

“Buying the house was relatively simple, although when we moved in, we discovered the previous owners had decided to leave us three fridges, which never worked, and, bizarrely, a canoe with a hole in the bottom!” recalls Mark.

The couple spent two years clearing and renovating. They felt the house had soul but lacked love. Dodgy carpets and unforgiving wallpaper marred its potential, and the entire house, which used to be four apartments on three floors, had to be rewired, re-plumbed and redecorated. Fortunately, Mark and Ben could see beyond the yellow walls and flock carpets, and realised that the view from the garden alone, over the river and the Pont Vieux across to Béziers, was worth all the work.

“That and the fact we can be at the beach in about 10 minutes or on the ski slopes in two hours. Spain is an hour away by car, and then you’ve got Italy which is about four hours in the other direction,” says Mark.

The house now reflects the couple’s love of quirky décor. “The dining room, especially, is full of bits and bobs and something for people to look at; cluttered junk, Arabic tiles, exposed beams but then the house also has a touch of the modern too: plasma TVs, en-suite bathrooms, good beds and linen as well as some hidden extras.” Mark says he always keeps in mind that their guests have chosen not to stay in a bland, nameless hotel; they have opted for a home, and he wants them to feel welcome and as at home as he is.

Mark and Ben are both ‘people people’. Coming from the hospitality industry, they had firm ideas about what constitutes a good B&B. “I always say the three Bs help: a good bed, a good bathroom and a good breakfast,” says Mark. “Although I come from a family who have owned and managed hotels and pubs, I still wanted to know what the competition was. Before we opened, I stayed at several local hotels and guest houses to see what was on offer, and then decided that we would be completely different.”

Mark worked on offering guests a totally relaxing experience in their ‘vintage heaven’ with a pool, library of books, four-course dinner and fabulous breakfast. “Guests keep returning,” affirms Mark with a smile, “so we must be doing something right.”

The house is large, but not overwhelming in size. It has five bedrooms that form the chambres d’hôtes, but Mark believes that is a positive point. “It’s a bit more intimate than other establishments. Our guests are here to unwind and relax so it’s less intrusive.”

Mark and Ben have found that, on the whole, setting up a business was fairly straightforward. In their experience, success is not just about the process of registration and form filling. The couple say that there is value in spending time on other important aspects of starting and running a new business. Just setting up a website isn’t sufficient to bring in customers, stresses Mark. “You have to get out there and sell your property,” he advises.

Other essentials include advertising, social networking, meeting and greeting the locals, tourist office personnel and anyone else who might be in a position to direct clients their way. “Before we opened, we invited friends to come and stay,” says Mark. We treated them as though they were our customers rather than our friends, seeing what worked well, what we could do better and adjusting our service and offerings accordingly,” he explains.

They have also discovered that running this style of business means that there is plenty of regular maintenance work to do; refreshing the paint and furnishings, plus making sure that everything looks as good as new all year round. They have plans to landscape the garden and add a garden studio where Mark, who is also an author, and guests, can paint, write and read; essentially, an inspiration room with the most glorious views.

It has taken a while for them to feel completely settled in this life, which although is just two hours away from London by plane, feels like a completely different world.

“Although we have been here for over seven years, it is really this past year that we have met some great friends, both British and French, many of whom have lived in this area for a long time,” Mark says. “Social networking has helped enormously, and we have regular nights out, lunches, dinners, bar gatherings where we can socialise and get to know people better. We have found that running a business like ours is also about helping one another out. We look for opportunities to help promote their business as well as our own.”

The centre of Béziers has a ‘city feel’ with its shady boulevards, vibrant market place, shops, department stores, theatre and concert halls. But within minutes, you can be in the middle of authentic Languedoc countryside: tiny villages, quaint bars and cafés, old churches, pastel-coloured shutters and flamboyant flowers flowing from window boxes and twisting round doors and gates in this beautiful part of France. Living and working in Béziers, says Mark, gives you the best of both worlds.

www.maisondelorb.comWant to read more about expats living in France? Read about expats running a B&B in Ardèche and an eco-friendly B&B in PicardyThinking of setting up your own B&B? Read our guide to setting up a B&B or gîte in France