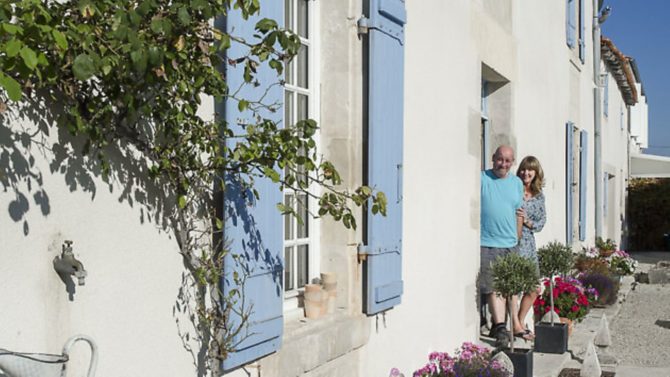 Whether strolling through the charming, walled gardens, reclining in front of the heated swimming pool, or relaxing in a living room peppered with tasteful antiques, the many guests to Simon and Sue Paine’s two beautifully renovated gîtes admit to feeling a mixture of admiration and envy at the effortless style, high-quality restoration and beautiful location of the couple’s Charente-Maritime holiday lets.

But the gîtes are just one arm of the couple’s lifestyle business in south-west France. They also run Château Chic Direct, an online business where they source French furniture and antiques from the plentiful brocantes that take place throughout the year in France, for clients from countries as far afield as America and Australia.

However, like all happy endings, it has taken years of hard work to reach this point; and, for the Paines, it has also meant taking a leap into the unknown, with the complete renovation of two 18th-century barns.

“When we came to France in 2003, we were looking for a property that needed a little restoration, not complete renovation,” explains 49-year-old Sue, a former fashionbuyer. “However, after months of looking, while haemorrhaging our equity renting a property, it really felt like it was never going to happen.”

In fact, the couple were close to moving back to the UK – together with their young children, Lucy, now 14, and Harry, now 12 – their French dreams in tatters, when their estate agent finally brought them to the property in the small hamlet of Vergné, which has now been their home for the past 10 years.

“The house had been lived in by a family since the 1970s, and it really felt homely,” says Sue. “They’d been happy here, raised their children, and were retiring to nearby La Rochelle. It needed a bit of decoration, but we were confident we could take it on.”

The only drawback was the fact that the accompanying buildings, which the Paines had earmarked for their rental gîtes, were two outbuildings: old barns that the previous owners had used to park their caravan.

“It wasn’t what we’d originally had in mind, but we fell in love with this property – and it finally seemed as if we could make our dream a reality,” explains Sue. “We looked at the barns and naïvely thought ‘we can do that!’”

The couple weren’t entirely without experience, having previously renovated a Victorian house in north London; acquiring skills that became an invaluable foundation as the barn conversions became a reality. “We’d really enjoyed renovating the house,” says 51-year-old Simon, an ex-sales director and former antiques auctioneer, “but we soon came to realise that this project was on a completely different scale. The skills we’d acquired were useful, but we had a lot to learn.”

“We look back sometimes and wonder how we managed it!” admits Sue, who now also designs and makes cushions, curtains and items of clothing. “There were times when we thought we’d bitten off more than we could chew.”

Nevertheless, once contracts had been signed and monies exchanged, the family moved into their tired farmhouse in February 2004, and set about renovating the barns as quickly as possible. “We lived with the house, it wasn’t a priority,” explains Sue. “We needed to get the gîtes up and running as soon as possible so that we could start generating an income.”

Luckily for the couple, getting permission to change the barns into gîtes was easily granted, partly due to their preparing the ground beforehand. “Before we bought in 2003, we went to speak to the maire, to explain what we wanted to do,” says Simon. “We knew we would need his permission. Luckily, he was happy for us to go ahead – and pleased that we would be generating more income for the commune.”

The pathway to friendship with the maire and neighbours alike was also smoothed both by a housewarming party the couple threw when they moved in February 2004, and because of a treasure trove the family found in a long-forgotten cave (cellar) at the property.

“When we moved in, we found that the property’s cellar was full of bottles upon bottles of wine,” explains Sue. “Some of it had seen better days, but there were some really lovely, aged wines there too. We let the maire have his pick – and he was thrilled!”

As for the housewarming party; although the couple admit that their lack of French at the time made it a little ‘awkward’, their willingness to mingle and share their lives with the local community made subsequent relations easier. “I’d recommend that anyone moving to France gets to know their neighbours as soon as they can,” says Sue. “We have lovely relationships with the other families in our hamlet – and I think starting off in a friendly way really helped.”

Another stroke of luck came when the couple found an excellent architect through the estate agent who dealt with their property. “The architect was amazing,” says Sue. “He had retired, but took on our renovation because he loved old buildings. And it really showed – every measurement, every detail of his hand-drawn plans was superbly thought-out: everything was spot on.”

As you might expect, however, renovating old barns into high-quality gîtes comes with its share of problems and issues. “In late 2004, when they were digging out the pool, and the septic tank, I looked out of my window one morning and it looked like a war zone,” laughs Sue. “I remember thinking – what have we done?”

Flexibility, too, was required, as old buildings – built originally to house animals in very basic conditions – do not necessarily conform to modern expectations. “One of the gîtes is at an awkward angle from the drive, and they just couldn’t get the concrete into it from the lorry. Our plan to tile the floor had to be scrapped, and we laid a wooden one instead. It doesn’t sound much, but we were disappointed at the time. Looking back now though, we’re pleased – the wooden floor is warmer for autumn and winter guests,” says Sue.

Amazingly, despite the scale of renovation required, the couple’s first gîte was up and running for guests by April 2005. “We only just made it,” says Sue. “The grass had only just come up on the lawn, and we were screwing the last door handle in place when they arrived!”

With one gîte ready, the couple started on the second. “The second renovation was a little easier,” says Simon. “Mainly because we’d learnt so much from the first and knew more about what we were doing.” The final gîte was completed in early 2006, just in time for its first booking. “Having a booking lined up was certainly an incentive to get things finished!” recalls Sue.

As for finishing touches, the Paines describe their style as ‘eclectic’ – with vintage French finds nestling against modern furnishings and beautiful, hand-painted kitchens and bathrooms. “We want to provide guests with a home-from-home feel,” explains Sue, “but style is important too. We like a mix of old, new and quirky.”

Once the gîtes were complete, the couple soon began to indulge their passion for furniture and antiques, sourcing items from brocantes, both to decorate their properties and to sell to customers on the internet. “Our original plan was to have a shop on-site,” admits Sue. “But that had to change – there was too much bureaucracy to wade through; it’s easier online.”

Having run the antiques side of the business for almost a decade, the couple now have a loyal customer base. “We advertised in UK magazines at first, and also made sure that our website was up to scratch,” says Sue, “and it grew from there. We now have regular clients in Australia, America, the UK – all over.”

With their impressive skills in design and their eye for a brocante find well and truly honed, the couple plan to expand further in the coming years. “We want to run courses in painting old furniture,” says Sue, “starting off locally, and possibly moving into residential courses. We’d also like to share our love of brocantes – perhaps running weekends where we take guests to the best markets and help them to find their own treasures.”

As for life in France, the family couldn’t be happier. “The children were young when we arrived, so have settled here well. They don’t really remember living in England,” says Sue. “The language was a challenge at first, but we’re getting there – and the children, of course, are fluent.”

“Who knows what the future holds? Perhaps when the children are grown-up, we’ll find ourselves moving on. For now though, everything is just perfect.”

www.chateauchicdirect.com www.gitesandantiques.comRead about how an expat couple transformed a run-down farmhouse into stylish gîtes in Normandy and their tips on running a gîteIf you’re thinking of setting up a B&B or gîte in France read our how-to guide