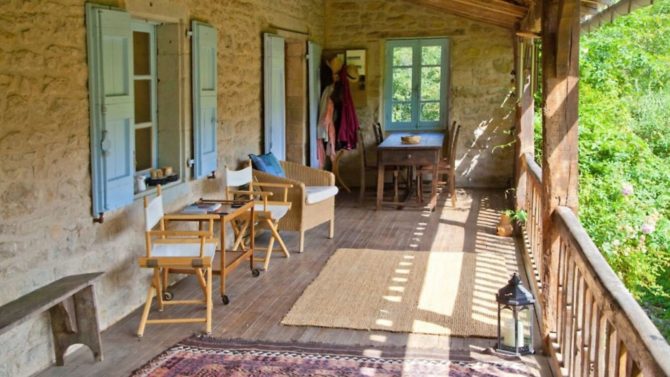 “If we can’t go out and save or change the world single-handedly then we can all do our own little bit and live by example,” says Nicki Chandler, an architect with an interior design background, and I realised just how true this is, especially in the world we currently live in.

A desire to live more sustainably and organically was a driving force behind Nicki and husband Brendan’s decision to escape the London rat race and move to south-west France in 2018, and they’re keen to share this message with the guests they hope to attract to their gîte and luxury yurt camp.

Nicki and Brendan eventually narrowed down their search area to the Midi-Pyrénées region and while they had a list of requirements for their new home they both agreed that location was the most important factor in their search, and subsequently arranged three viewings in Tarn-et-Garonne for their first weekend of house-hunting.

“We wanted to move quickly because of Brexit in particular, not that it would have made a difference because we wanted to come to France anyway, but we wanted to be here and settled before anything was finally decided,” says Brendan. “We came to the conclusion that you’ll always find somewhere better – it’s inevitable – but you can’t look everywhere, and we decided that you just have to be happy with what you’ve got. And we still are.”

Not only was the location an important consideration in terms of their desire to live in harmony with nature, it would also have a role to play in their future gîte business plans.

Nicki and Brendan were keen to find a house that wasn’t too big but had the potential to add gîte accommodation, and that first property they saw ticked all the right boxes. Located in the commune of Caylus, Sourrettou is an old farmhouse that had previously been owned and renovated by an English family, who have since become good friends.

The sympathetic refurbishment work was one of the property’s big plus points as far as Nicki and Brendan were concerned, along with the further development opportunities it offered. Architect Nicki has drawn up plans to convert the barn into a gîte that will sleep four to six people, and the couple intend to complete work to create a small self-contained apartment underneath the main house started by the previous owners.

At the opposite end of the grounds to the farmhouse and barn is a luxury camp, which is being rented out as the Midsummer Retreat. The camp boasts a traditional yurt with a comfortable large double bed and Persian rugs on the floor, a separate bathroom cabin with hot running water, and a summer kitchen/dining/living space. The latter is a hand-finished wooden and canvas structure that has been crafted using ash, oak and hazel from the couple’s own woodland, and is equipped with appliances, crockery and a dining table. Installing a swimming pool is another future project, which guests staying in the gîte and yurt will have shared use of.

Janine Marsh: My life in rural France with 72 animals

The couple are keen to use clean energy sources and intend to explore the possibility of installing solar panels and harvesting rain water, and eventually will perhaps even live off-grid. Their environment is already conducive to living more sustainably – the house is set in six acres of land, much of which is hillside woodland, and Nicki and Brendan have a fresh supply of eggs from the chickens they keep, while the large potager they have planted this year is another step on the road to self-sufficiency. Their own grounds and the surrounding valleys are home to all manner of wildlife, while the apple orchard, fruit trees and numerous plants encourage bees and butterflies.

“The environment is such an important issue at the moment and it’s difficult not to be aware of that, whether you believe in it or not. We want to promote that message as much as we can to our guests and they can take as much or as little from it as they want to. If they leave here thinking a little bit more about how they live day-to-day then that’s a good thing.”

Nicki and Brendan have been in France for almost a year now and have settled in well in a relatively short space of time. “We’ve probably made more friends here in a year than we would have in the UK,” laughs Nicki. “Our neighbours are mostly French and they are so friendly and helpful. We feel very welcome.”

When I ask if life in France has lived up to their expectations so far, there’s not a hint of hesitation from either Nicki or Brendan.

“Absolutely,” replies Brendan immediately. “I think the fact that we were so well prepared mentally helped; we’re not the sort of people who rush in and think it’s all going to be wonderful. Of course there are downsides – dealing with the bureaucracy mostly! – but the most important thing is to be adaptable and not get cross because things aren’t the same as you’re used to. You just have to accept that things are different and different doesn’t necessarily mean bad. It’s certainly not perfect in the UK either!”

“I think the main reason we chose France and what we still love about it is the work/life balance and the lifestyle here,” says Nicki. “The French have just got it right. We’ve given up the rat race in the UK and we don’t have the commute anymore, so we’ve got the best of both worlds really.”

Buy into the good life: how to become a French farmer

Previous Article Buy a property in Nice and brush shoulders with the likes of Elton John, Bill Gates and Bono
Next Article How to live off-grid in France…and 7 other things we learnt in the October issue of French Property News: a Frugal France special!