Discover Toulouse in south-west France on a friendly food tour 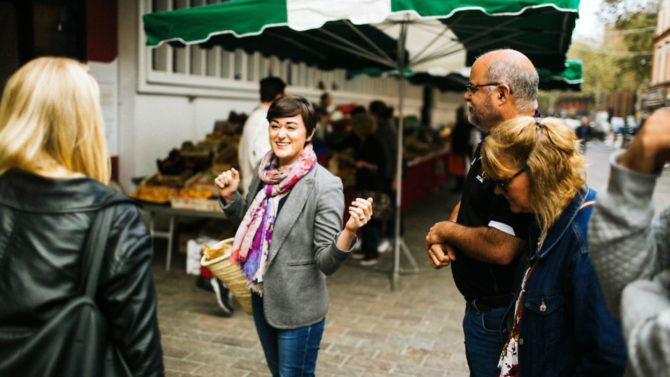 Often the best way to get to know a new city is through its food, exploring its fascinating culinary roots and vibrant market and restaurant scene.

Knowing just where to start can be daunting however, especially if you have just arrived from another country, do not speak the language very well and have no idea where the best districts are or who sells the most tempting regional products.

Jessica Hammer arrived in Toulouse, in Occitanie, south-west France, from America in 2017 with her husband, Peter, who is a dancer, choreographer and jazz and tap dance teacher. He acquired an artistic visa to come to France and had professional contacts in the city, which is why they chose to settle in La Ville Rose.

“This is our first time living long-term outside the United States,” Jessica says. “It’s something we’ve wanted to do since we got married. Several years ago, when we lived in Chicago, we were both at the point in our careers when we thought maybe now is the time to start thinking about it.”

The couple, who are both 35 and have been married for 13 years, had always been interested in France. On a trip to Paris a few years ago they learnt all about French wine and cheese which piqued Jessica’s interest.

“I had been pursuing it as an interest in my free time, going to a lot of wine tastings and having friends over for cheese dinners and reading all about it,” she says.

“I decided to get a job in a cheese and wine shop and spent a year there, working behind the counter, selling wine and cheese. About half of the cheeses they sold were imported and half of those were French cheeses.”

While working at the cheese shop in Chicago, Jessica and her husband started researching what visas might be available and were delighted to discover Peter’s artistic work was eligible for a passeport talent.

“Before we submitted our visa application we visited to see if it was a place we’d like to live,” Jessica recalls. “We both really enjoyed it, but I think we underestimated how much we would fall in love with Toulouse in particular.”

Leaving one of America’s largest cities for southern France did come as a cultural shock at first, however, especially the slower pace of life, but they have since become more accustomed to it.

“You are also allowed to take it a bit slower, so we really enjoy that here,” says Jessica, who grew up on a blueberry farm in rural Michigan. “I enjoy winters here much more too.”

The couple were able to find an apartment through a friend of a friend in the quartier of Minimes, a 20-minute walk from Place du Capitole, Toulouse’s magnificent main square.

Although Jessica was delighted to have so much fresh French produce on her doorstep, she struggled with shopping at first, as she couldn’t communicate easily with stall holders.

“My French when we first moved here was not that great and I so wanted to talk about the cheese, but I just couldn’t express myself in French yet,” explains Jessica, who went on to take intensive language classes with her husband soon after they arrived.

“With my love of cheese and wine and the knowledge I had, I really wanted to ask questions and I couldn’t because I hadn’t found anybody I could ask in English.

“It’s part of the reason I wanted to start Taste of Toulouse, to give people the experience I wish I could have had when I first moved here – to be able to learn about all of the amazing food and wine here, in my own language.”

Now Jessica’s English-speaking food tours, which she launched just over a year ago, inspire people to explore French cuisine and culture and give an insight into the lively local life in Toulouse. Her small group tours visit the city’s largest covered marked, Marché Victor Hugo, stopping off at passionate local artisans who make and sell some of the best products in south-west France.

“I chose that one because it was my local market,” Jessica explains. “I had been going there regularly since we moved here and as my French continued to improve, I got to know the different vendors, asked them questions about their products and what they were doing and learnt about their stories.

At home, as her husband is a vegetarian, the couple enjoy cooking together with the wonderful seasonal produce which is available from the market.

“One thing I’ve really appreciated here, is so much more of an emphasis on cooking with the produce that’s in season,” Jessica says. “In Chicago I was used to being able to go to the grocery store at any time of the year and get anything.

“But here you have to really focus a bit more on what’s actually in season.”

Their local covered market in Place Victor Hugo, which dates to 1892, is home to more than 70 specialist traders selling a wide range of producets, as well as five restaurants which source their products from the market.

“It’s really cool,” Jessica enthuses. “We have all different kinds of butchers, everything from your basic beef, lamb and pork to a tripe butcher who does organ meat and offal.

“We have a lot of charcuterie vendors doing excellent charcuterie, several bakeries and pastry shops and foie gras producers, of course, from south-west France. We have seafood and traiteurs, which are prepared food vendors.

“It’s really fantastic and to me, what sets apart Victor Hugo from some of the other markets we have in the city, is that inside we have several cafés and wine bars where you can get a cup of coffee, or a drink, and hang out there.

“The atmosphere is great, it’s not just a place to go and do your shopping, it’s also very much a community gathering place.”

As Jessica’s family are farmers back in the US, she grew up with a close relationship to food, as well as the ins and outs of running a small business, which has paid dividends in her new venture.

When she first moved to Chicago she also worked for a chamber of commerce, liaising directly with all the small local businesses and overseeing marketing and events.

“I was the tour guide for the neighbourhood,” she smiles. “When you’re working in such a small community like that, you realise how much people rely on you to be the pulse of what’s going on.

“You quickly learn to always be looking at things with new eyes,” she adds. “I really loved working directly with all of those local businesses. It’s one of the things that has carried forward into my work now, heavily promoting how much local businesses are the heart and soul of the community.”

As well as the Victor Hugo Market Tour, Jessica also runs an afternoon Chocolate and Pastry Tour which takes in six of her favourite chocolate shops and pâtisseries in Toulouse city centre.

During the summer she usually runs between five and eight tours a week. Some of her customers have just moved to Toulouse and want to come and find out how you shop for food at the local market or others have lived in the city for a while and want something fun to do with their visitors. They are generally a mix of Americans, Britons, Australians, Irish and other European nationalities.

Jessica says: “I’ve got a great relationship with the office of tourism here.

“They have been really fantastic and hugely supportive of my business venture. They saw that I was really serious about bringing English speakers into the gastronomic fold.”

Following the impact of the coronavirus pandemic, Jessica has recently restarted her tours with new safety practices in place including smaller group sizes, mask-wearing, social distancing and regular hand sanitisation. She has also launched an interactive, online cheese workshop explaining how to build your own beautiful cheese plate and master the basics of French cheese.

When Jessica isn’t busy working, she likes to spend her afternoons in Saint-Cyprien on Toulouse’s Left Bank.

“It’s got one of the most beautiful parks in the city, right along the Garonne river,” she says. “It’s just a gorgeous place to picnic, you see people there playing pétanque and enjoying the afternoon with their dogs.

“There are great bars and restaurants nearby and one of my favourite chocolate shops is in Saint-Cyprien. There’s also a cute museum, a vintage picture museum, called the Musée de l’affiche de Toulouse.

“There are a lot of great things on that side of the river, but tourists don’t always go there because it’s not directly in the city centre.”

Jessica and Peter will have to renew their visas, but their hearts are set on remaining in France as long as they can.

“We are hoping to be here for the forseeable future,” Jessica says. “We love living here and Toulouse is a place that feels like home to me.”