Couple in their twenties swap Cornwall for Charente in France 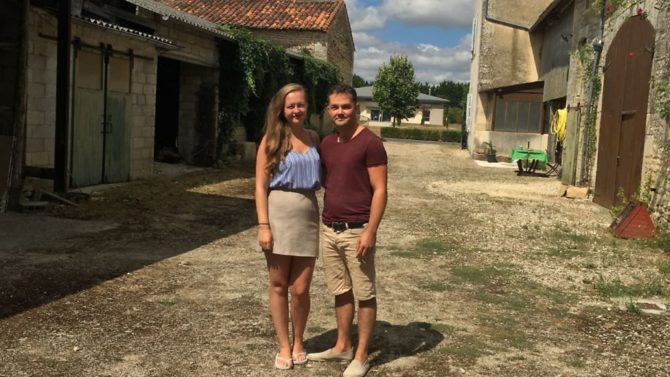 Getting the keys to your first property is a milestone in itself, but Simon Robinson and Chloe Turner have gone one step further by buying their first house together in France

Many young couples dream of getting a foot on the property ladder but soaring prices in the UK have made it almost impossible in some areas, as ‘generation rent’ struggles to save up huge deposits.

After fruitless house-hunting, they decided to extend their gaze over the Channel to see if their money could stretch a little further in France.

Simon, 25, had spent family holidays in Charente as his parents own a property in the area, although Chloe had never been to France before.

“We were looking for properties or businesses in the UK and they were all very expensive,” Simon says. “My parents have got a house out in France and they have done for about nine years. So we thought we’d come out and have a look and see what we could find.

“We drove for a few days and we saw four other properties and this was our fifth – we fell in love with it.”

It was the sheer size of La Roseraie, in Courcôme, which was an instant attraction for the incredibly affordable price of €80,500, as well as the future possibilities the building possessed.

At one point in the past, it had had two families living in it, so it was already divided into two separate apartments in one big house.

While it had been empty for three years, the lady who owned it lived with her son just down the road, so it had been reasonably well-maintained.

“We came over in April 2018 to have a look at some places and we put in the offer the day after we saw the house,” Simon said. “So it took four months from viewing to buying.

“Knowing my parents had done it made it a bit easier and, luckily, we ended up using the same estate agent they’d used for theirs as well,” he adds.

The couple plan to renovate the large property and turn it into three gîtes. They envisage living in the smallest apartment downstairs when they have guests in the two others, or if they rent it out as a full house, they would decamp and stay with Simon’s parents.

On discovering La Roseraie, Simon says: “It’s beautiful, the gardens are really nice and the location was good.

“It was near enough to mum and dad, which gave us a little bit of family nearby, but not too close that they were round the corner!

“We started our search in the Midi-Pyrénées, hundreds of miles south, and then we ended up buying 20 minutes’ away from my parents,” he laughs.

“It’s definitely been nice to stick to the same area, the area that we know.”

Simon’s dad is a builder back in the UK and his parents currently run their house as a holiday home, but he says they plan to move out full-time in the next year or two. Simon has a younger brother and sister and Chloe has three older siblings who they can call on to pitch in as opening day gets closer – with a stay at one of the new gîtes as a tempting incentive.

Courcôme, in the Nouvelle-Aquitaine region, is a couple of hours inland from Bordeaux and the next big town is Ruffec with its Romanesque church and the remains of an ancient castle.

It’s also only an hour away from the Cognac area, home to world-famous brandy distilleries and a charming medieval old town, and there are plenty of local châteaux to visit nearby.

Courcôme enjoys a central location, making it a good place to stop off for holidaymakers who are driving down to the south. The local train station is also only a two-and-a-half hour train ride away from Paris.

“I really like the area,” says Simon. “I’ve been coming here quite a lot, been brought up here, so I really love it. When I brought Chloe here for the first time she really loved it as well, so it made sense.

“It’s like a little microclimate in itself – really warm here a lot of the year.”

After getting the keys in July last year and spending a busy summer in France, Simon and Chloe moved back to St Austell in Cornwall to live with Chloe’s mum while undertaking the extensive renovations needed at their new venture before relocating there full-time.

However, after returning to La Roseraie this spring, they were determined to move to France as soon as they could, rather than continually travelling back and forth. So Chloe, 20, and Simon have recently found a position at Châteaux les Trois Brioux, in Cher.

They hope to move in permanently at La Roseraie following the summer of 2020.

Simon says: “We were out doing renovations in March and really didn’t want to go back to the UK again, so started looking for jobs that may be able to get us over here full-time instead of going back and forth.

“After emailing lots of places, I found a position with a château in Cher for a couple to work as estate assistants. That is where we work now, in an amazing château estate, Château Les Trois Brioux, working in the grounds.

“We get to travel back to our house each weekend to enjoy it and carry on our renovations.”

The couple, who travel over from Plymouth to Roscoff and then drive down to Courcôme, spent several weeks last summer working on the first floor apartment, stripping wallpaper, knocking down plaster walls to reveal the old stonework, repointing walls and fixing windows in the outbuildings before the winter.

“We’ve given ourselves a lot more work than we could have, but it’s going to look really nice because of the extra work,” Simon explains.

“There’s the garden to do as well which is going to be the main selling point, there are lots of fruit trees, roses and flowers.

“We’re trying to do as much of the work as we can ourselves. We’ve done 90% of the work at the minute, my dad’s come and helped us out with a few bits but he had to go back to the UK to work.

“But we’ve been cracking on between me, Chloe and my mum, who’s been doing the garden for us.”

When it comes to opening for business, the couple already have hospitality experience which will be invaluable when they start to run the gîtes full-time. Simon has spent the past 10 years working in hotel management and Chloe has also previously worked in a hotel.

“We were originally looking at restaurants or hotels in the UK, I wanted to go and do my own business, because it was the right time for me to, but the mortgages in the UK were crazy,” Simon admits.

“Cornwall’s prices have definitely gone crazily high and it would have put a lot of financial pressure on us, whereas this takes that off.”

Once their new home and gîte business is completely finished, in two to three years’ time, it will be able to accommodate up to 16 people, with six or seven bedrooms in total.

Chloe is looking forward to the decorating stage, inspired by the traditional old French style, and the pair have already started buying a few items at car boot sales and vide-greniers which Simon’s dad helps transport in his van.

Simon says: “It was a dream when we first came over – we thought ‘we could actually get a house out here’.