Turning a French watermill into a home with gîtes 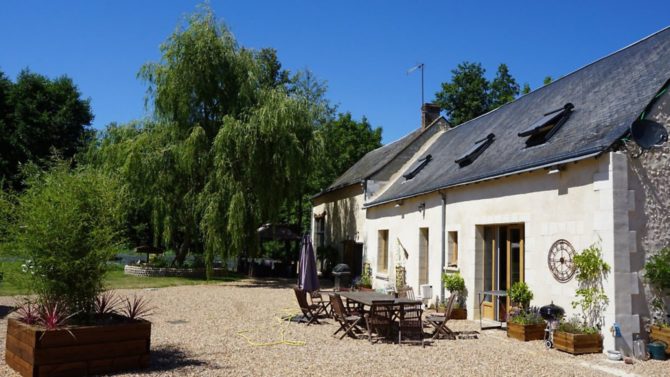 A cancer diagnosis in 2014 prompted Trevor Thompson and his wife Kay to leave Milton Keynes for a decommissioned watermill in Sarthe, which they have transformed into a home with two gîtes. Here’s how they did it

Why did you decide to move to Pays de la Loire?

It was really Kay’s decision to move to France although it had always been my retirement dream to live here. I used to work at Disneyland Paris and my parents owned a property in Charente and then Normandy, so my connection with France went back a long way. I was diagnosed with terminal cancer in 2014 and Kay had recently been made redundant, so she said we should look into doing it. We stayed for a week in a gîte slightly further north than here and she fell in love with France too. We chose this area for convenience more than anything else as it’s so accessible, and we started researching properties within this vicinity that we wanted to go and view. My parents offered to come too and perhaps invest with us, and I remember sending my dad a list of properties with Moulin Volarie, in Sarthe, marked as my favourite. It was the first one we saw and we went on to view several others but nothing else matched up to the potential we saw this one having.

What was Moulin Volarie like when you bought it?

It just about had water and electricity but that was about it! It was a watermill that we think dates back to before 1650 but it was decommissioned in 1952 and unfortunately all of the original mill workings were removed. We do still have part of the water run in the garden though. The building was a complete renovation project and we started work on the day we got the keys, so were basically camping here while the work was carried out. Kay chiselled off all of the old render, which was a huge amount of worked but saved us a lot of money. The first job was to replace the roof and create a gîte upstairs so that we could start renting it out and earning an income. We then moved on to the downstairs gîte, and we created our own living accommodation in the barn opposite. Eventually we’ll create a third gîte in what was the original mill house.

Did you find the buying process to be straightforward?

We were very fortunate as our neighbour is a local councillor and we get on well with him, and he guided us through the process. He’s been fantastic, as has the local mairie – they’ve supported us in everything we’ve done. The mayor himself often now drives past with visiting dignitaries to show what we’ve done with the place.

What do your guests enjoy in the area?

We have 14,000 acres of forest on our doorstep which makes us popular with dog walkers, and we have a small lake ourselves where our guests can enjoy fishing. The main draw tends to be the area itself – we’re close enough to the ferry ports so it’s not too long a drive to get here, and the Vallée du Loir, numerous châteaux and Le Mans are all within easy reach.

What is the best thing about living in France?

The fact I’m still alive is a huge one! Being here has prolonged my life – following my cancer diagnosis my prognosis was very poor and I was told there was nothing more they could do in the UK, but the healthcare I have received in France has been fantastic. I fell very ill here after we moved and was seen very quickly by a doctor who arranged a programme of treatment, which my body has responded well too and test results now suggest that I’m in remission. The summers here are glorious and last a lot longer, as we are far enough south to benefit from the better weather. Kay is a sun worshipper and loves having a pool that she can swim in every day. She also loves gardening and growing all her own vegetables. We both thoroughly enjoy the pace of life here too, and being able to do things at our own pace. Hospitality has been my career for many years now and I very much enjoy meeting new people and the interaction we have with our guests.

Ian Moore on opening a B&B in France

What happens after you move to France?