“We could have a huge lifestyle improvement for the same money, if we were just a bit smart about it” 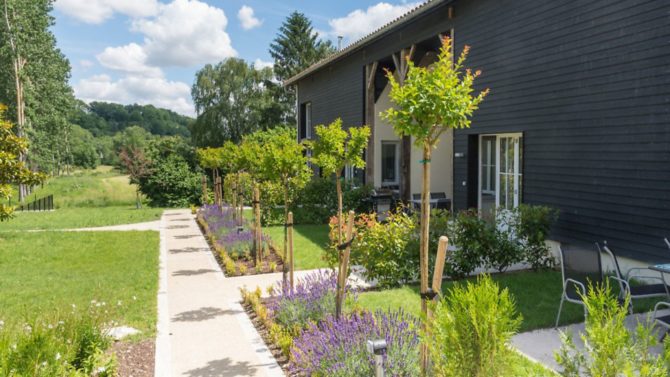 An uncompromisingly practical approach to owning a home in France has led to a wonderful retreat for Anne-Marie Smith and her family, and a successful business venture too

Living in the London suburbs, with busy lives and two businesses to run, Anne-Marie and husband Andy had started to search for a home further out in Kent, with more outside space for them and their three young sons (they now have four). But as the search progressed, Anne-Marie felt increasingly uncomfortable. “I started thinking, this doesn’t make any sense,” she explains. “We’d have a bigger mortgage and a longer commute, and yes, we’d have a larger garden, but a lot of the time the kids would be at school anyway, and I just didn’t get it.”

The couple had always loved France, and looking out of the window one rainy day in London, Anne-Marie found herself thinking, ‘there’s got to be another way, what if we bought in France instead?’

As the idea started to formulate, her strong practical streak kicked in. “We could have a huge lifestyle improvement for the same money, if we were just a bit smart about it,” she says.

They settled on a location – Eymet in Dordogne (Nouvelle-Aquitaine) which answered their three key criteria: less than half an hour from an airport (Bergerac), they could have a property within walking distance of a year-round town, and enough space for a minimum of four, ideally seven, holiday rental units. Living hectic lives in London didn’t make it easy to find time to view houses in France and so Anne-Marie contacted a British property finder living in France, who used to be a location finder for Warner Bros. He unearthed four or five suitable properties in Eymet, one of which was La Palanque. As Anne-Marie was working and couldn’t get away, Andy went to view it alone. Liking what he saw, he put in an offer and they bought it without Anne-Marie ever seeing it! Luckily, when she first saw it, she loved it too.

The property consisted of a handsome five-bedroom house, barns that were ideal for conversion into gîtes and 25 acres of land. By the time they got the keys, they were ready to start the work on the holiday lets. The building project started in 2015, with completion set for 2017. And then the Brexit referendum came along. Although Anne-Marie is optimistic about the long term, in the shorter term things were just too uncertain to uproot the family, move to France and start a new business, so they changed their plan.

They decided to keep a foothold in London and continue to work in the UK, and for a while they considered keeping La Palanque as a “very nice holiday home”. By this point they had spent over a million euros on the barn conversions and pool area. It was ideally set up as a business, but the couple were questioning whether they wanted to spend their summer holidays looking after paying guests. They started to consider whether they should just sell it.

Yet again, Anne-Marie’s practical side came to the fore. “We made a new plan,” she says. “We just needed to think outside the box, make it more of a year-round place, not just offering standard family holidays.” They put in a ‘retreat room’ and started working with an American yoga travel company and a local Pilates instructor, and are also in discussion with a cycle tours company. They also decided to aim more at high-disposable-income couples and offer a luxury hotel standard of accommodation. Now the gîtes have quality furniture from Feather & Black and chic sofas from made.com – “they’re in France too and will send people out to do repairs,” adds Anne-Marie, ever practical – and while the bed linen and towels are luxurious, and the mattresses orthopaedic, as she was buying in bulk she was able to get them at a discount from a hotel supplier.

Another successful addition was to offer the property for corporate retreats, perfect for out-of-season bookings.

A flexible approach to changeover days has also paid dividends. A recent example was one couple who, being able to choose cheaper mid-week flights, decided to stay at La Palanque for longer. “They spent the same amount of money but instead of it going to the airline, it came to us,” laughs Anne-Marie.

BEST OF BOTH WORLDS

With the business side coming along nicely, Anne-Marie’s family enjoy the benefits too, spending four or five weeks at La Palanque during the summer. “The children get so much from it – they can spend proper time with their friends but there’s not the pressure of all going on holiday together,” she says. “They have so much freedom, which I can’t give them in the UK. They roam for hours on our land and go out to buy baguettes on their own – would I do that with a six-year-old in London?”

Although they visit at other times of the year too, when there may or may not be holidaymakers staying, they don’t need to worry about looking after guests as they have a live-in concierge. “We run our lives very hard in London and I was determined we wouldn’t do that in France; that’s not what we set out to achieve.”

Previous Article QUIZ: Where should I buy a house in France?
Next Article Charming bargains: seven gorgeous French properties for a low budget