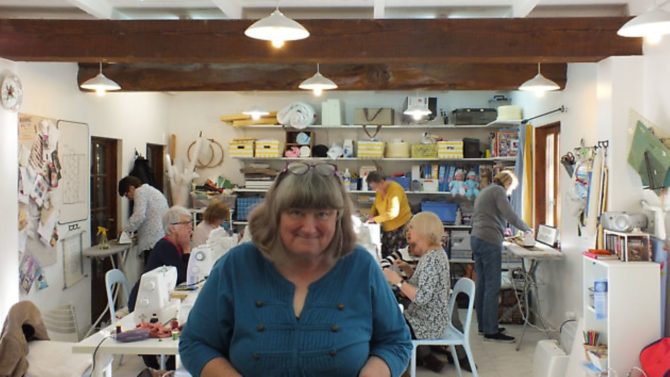 A move to northern France sae Sue and Peter Sharp turn their hand to running residential quilting workshops. We find out why they decided to move and how they set up their business

When Sue and Peter Sharp first moved in 2002 to Aix-en-Issart in the Pas-de-Calais department, they were too young to retire, and needed an income. Sue had long held a passion for sewing and quilting, having trained at the Royal School of Needlework, so when Peter had finished renovating their new French property’s outbuildings, they opened two of them as gîtes, and a third as a workspace. Today, they run residential quilting workshops and classes, with guests coming from far afield to learn from Sue’s teaching and creative skillset.

Prior to their move, Sue worked in communications and Peter was a heating engineer, and though they had long dreamed of moving to France, where they spent most of their holidays, it seemed destined to stay a fantasy. “Whenever Peter and I went on holiday, it was my job to point out houses for sale and say, ‘Look, we could live here,’” Sue remembers. “It was Peter’s job to point out that I hadn’t thought it through. What about our jobs and earning a living? We didn’t speak French. What about family?”

Then, in 2002, they took an Easter break to northern France. When they arrived back on home soil their journey back to their home in Buckinghamshire was beset by traffic problems. While queuing at a slip road at a motorway service station to re-join the crowds in yet another UK traffic jam, Peter turned to Sue and said: “I can’t stand this any more. Let’s move to France.”

Sue says she is not sure who was most shocked at Peter’s uncharacteristic outburst. “Five months later we had packed up work, sold our house, put our belongings into storage and moved into rented accommodation while we searched for our ideal French house,” she says.

Looking back, Sue and Peter say that although at the time they felt as though the decision was made on a whim, they each secretly knew that the other was fed-up with the routine of life and work. “We had idly discussed running holiday cottages, building a business around my hobby of quilting and having jobs that made us less money but were less stressful,” says Sue. They hadn’t been able to see a way of making it work in the UK, but felt the equity in their house plus savings would go a lot further in France, having found property generally less expensive than in the UK.

“We chose the department of Pas-de-Calais mainly because transport to the UK is great, so we could see family readily, and as a back-up plan I could do consultancy work in London. We also researched the location and thought it would appeal to families from England, who could get to this area within a day; and it’s a popular area with guests from Holland and Belgium,” explains Sue.

Within days of arriving, they fell in love with a house near Licques, a 40-minute drive from Calais. It was a huge old manor farmhouse, gently crumbling and being badly renovated by the owner, who had inherited it from his mother. Sue sighs when she says the original tiled floors were wonderful, the barns fabulous, and it was very cheap: the equivalent of £60,000 at its price in 2002. Despite falling in love with it, with no proper bathroom or kitchen and needing a new first floor, they decided to have it surveyed. They were horrified when underpinning costing around €100,000 was recommended, and reluctantly walked away.

They moved their search to the area of the Sept Vallées, and in Aix-en-Issart, close to Montreuil-sur-Mer, found their ideal home. “We’ve been in our village more than 10 years and our house is still known as ‘the old café Duval’ (though the Duval family has been gone for decades). Our elderly neighbour says the village telephone used to be in what is now our sitting room, and in the 1960s, before television became more available, the proprietor used to hang a sheet and project films on one of the walls on Friday nights. Fifty years after we’re gone, it may be known as ‘the old Sharp house’ but not before then,” says Sue with a chuckle.

Sue and Peter say that they love how their move to France has given them the chance to live and earn a living in a very different way to their comfortable but stressful rut in the UK. “There’s a lot more space and fewer people. We like living in a little village and being part of a close community. We’ve had a wonderful welcome.”

Perhaps surprisingly, in the years since they moved to France, little has changed. They still view the area of the Sept Vallées as a sort of ‘Cinderella area’, which has far more to offer than people realise and is still quite undiscovered. Most tourists from the UK pass through via the ferry or train, and head straight onto the motorways to Paris, the south or north-east to Champagne-Ardenne and Alsace. They never see just how pretty the countryside is: lush and fertile with age-old forests and villages of pretty little houses and old churches; towns with ancient belfries, cobbled streets and historic buildings, where artisans and local produce are celebrated. There are beautiful sandy beaches and lively seaside resorts that reflect the famous light of the Côte d’Opale coastline. With its rich culture, heritage and history, this is an area of France where the people are warm and welcoming.

The business though has changed in the last four years, mainly in response to the economic crisis. “Money spent on quilting is discretionary, so we’ve introduced some less expensive options: the ‘Weekend Wonder’ for example. This is a Friday night to Sunday afternoon workshop, which works well for quilters coming from the south-east of England. It is also a great introduction to what we do. Once people have tried it, we hope that they will come back for longer workshops and stays,” Sue stresses, adding that repeat business is very important and that most of their quilting workshop customers return. “In fact, our last group booking of 2014 was a party who were making their fifth visit,” she says proudly.

These days, group bookings for residential workshops have become a bigger focus, and have proved very popular. Sue also offers custom workshops, focusing on a technique, pattern or project for a specific group. UFO classes – where the members of the group bring their ‘UnFinished Objects’ – are also increasingly in demand. “I’m on hand for technical support and to provide tea, coffee and cake,” says Sue, a keen baker and cook.

Her weekly quilting lessons for locals remain popular, and attract both French and expat members. Over the years many have become firm friends and the group make items for charity on a regular basis. Sue’s teaching skills are legendary. “Everyone can learn,” she enthuses; and the workshop equipment and bespoke layout is hugely appreciated by both learner and experienced quilters.

When it comes to running a business in France, the couple have found that they needed to put more thought and work into creative marketing. In their experience, advertising and competitions targeted at quilters, plus discounts for people making repeat visits, have worked well, and the family holiday business in their gîtes has been quite stable.

Sue has kept up the French language lessons she started when she first arrived in France and is now fluent. She has lots of friends in the village, and was asked to stand at the local council elections; an increasingly regular occurrence for expats in France. Though not elected, she says: “I got enough votes for honour to be satisfied!”

Sue and Peter admit that Sue’s determination with her French lessons means that Sue is doing better with the language. “I’m certainly happier when mixing with French friends than Peter, who still struggles a bit with French, which can make him feel a bit left out,” she says.

Although she originally registered as a microentrepreneur with a small business, she found the experience quite tough due to the fact that social security contributions were payable in full regardless of turnover or profit. After the auto-entrepreneur system was introduced, they changed to that regime as social security contributions are calculated based on actual turnover. As of January it fused with the micro-entreprise option, retaining the same PAYE principles but with a number of alterations. Another helpful development was finding a bilingual accountant who knows both French and UK systems.

Although sometimes they both feel that their move has meant that they have less money and reduced financial security, they are happy with their decision. “We love our life in Pas-de-Calais. I feel far greater satisfaction with our success here in France than I did with career rewards in the UK,” says. Sue. “We feel enriched by exposure to French culture, and very happy to have the opportunity to have our adventure and to have it succeed.”