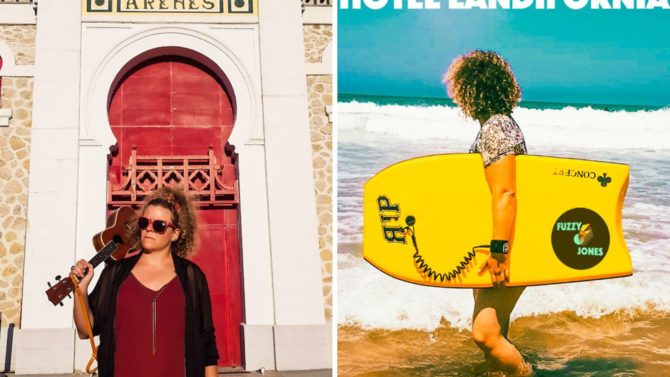 Keen to beat the Brexit deadline, musician Fuzzy Jones moved to Landes in 2020 and has just released her album, Hotel Landifornia

In 2020, Fuzzy Jones swapped Yorkshire for the south-west coast of France. She tells us about life in Landes in Nouvelle-Aquitaine, the challenges of settling in during a pandemic and how her new lifestyle influenced the music on her new album.

Why did you move to France and to Landes in particular?

I moved to France for several reasons. Firstly, I’ve always wanted to live in France and spent all my summers here as a child, so have grown up loving it! Secondly, my partner is French, and thirdly because of the Brexit Withdrawal Agreement deadline. My partner is from Landes and we wanted to live by the sea in the sunshine, so it felt like a good place to begin our French adventure.

Did you always intend to create an album about Landes? What is it about Landes that particularly inspired your music?

I never intended to write an album about Landes, but was so inspired by the beauty of the area when I arrived here that I started writing. I went for many winter walks on the beach and bike rides in the forest and found them to be extremely therapeutic during the lockdown here in France. The culture of Landes also inspired the music on my album, for example I saw a picture of horses on stilts in an old book about Landes – I was amazed! I’d seen shepherds on stilts, but never a horse!

What gave you the idea for the album’s name, Hotel Landifornia?

Well, some of the surfing community and in particular a cool burger place, Jack’s Burgers (which I love) call it Landifornia, as it’s a lot like California with its west-coast surfing way of life. One of my favourite albums is Hotel California by The Eagles and I spent a lot of time listening to that album when I was a kid driving through France with my parents. My album is very reflective and moving here has brought up all kinds of memories and questions of belonging.

How did Brexit impact your decision to move?

Brexit was one of the biggest reasons we moved and moved so quickly. We had been thinking about relocating for a long time, but when the Withdrawal Agreement was announced, we knew we had to move by 31st December, otherwise I would have difficulty becoming a resident here. So, we made some very quick decisions – sold our house, entered a civil partnership and packed up our life within a few months. With the help of my parents, who drove us here, in the small window we had before another nationwide lockdown and borders closing, we made it here just in time! Also my French partner was feeling in limbo living through all the years of Brexit negotiations and more alien in a place that had been home for 20 years.

How has moving during the pandemic affected your experience of life in France so far?

Life in France was very different when we first arrived, as you can imagine. There was nothing open, we had a 6pm curfew for a while with no restaurants or café culture, so it was extremely quiet. Not the France I knew. It was quite strange and led me to be very reflective and therefore inspired my songwriting. I went on lots of walks and cycle rides and got a lot closer to nature, which coming from a city was pretty breathtaking. Landes is beautiful! So not a bad place to be in a lockdown at all. I have to say though, I felt a little isolated at times and it slowed down the settling in and integration process. My French isn’t great yet, so this wasn’t good when I really needed to meet people. However, things finally started to open again and the France I know is coming back!

What do you enjoy most about living in Landes?

I love the two types of landscape in this part of Landes – one minute you’re in the pines, the next you’re in the sand dunes by the sea. It’s so dramatic. The coast goes on forever from Seignosse. I love it! I also love the space, and the laidback lifestyle. The food’s pretty lovely too – like all French food of course!

Do you have a favourite secret address you’d be willing to share?

That’s a great question! Everyone should have a bite to eat at YUMA, if they’re around here. It’s a cool little restaurant/bar in the Pedebert à Hossegor area, which serves delicious Asian dishes and has live music. Les Halles in Seignosse is a cool spot too, with local food and live music under the pines. I couldn’t possibly reveal my favourite beach spot, but Les Casernes is a pretty special wild place.

What’s it like getting a visa to move to France post-Brexit and mid-pandemic?

Where are the sunniest places in France?

Previous Article What you need to know about France’s Covid-19 health pass system
Next Article How did France perform at the Tokyo Olympics?