How we opened a top rated restaurant in Aude 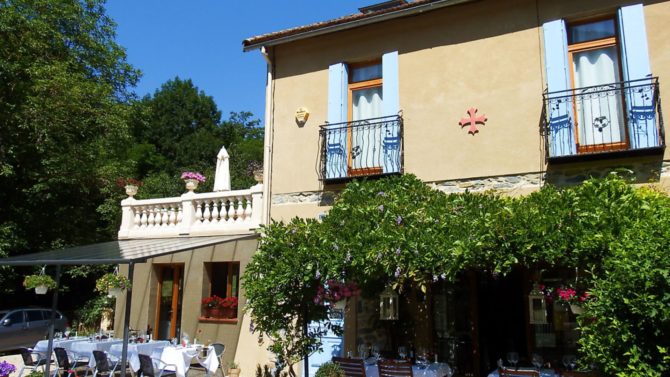 After fulfilling a life-long ambition and opening a restaurant in Aude, Paul and Val Bridgestock are winning rave reviews for their food.

When it comes to deciding where to eat many people often check in with TripAdvisor before booking a table. How many stars a restaurant has, whether it’s value for money and what people have to say about the service and food will often determine whether I dine or don’t.

Consulting the website for the highest-rated restaurant in Languedoc is how many people found themselves wining and dining at Restaurant Aux Quatre Saisons. Run by husband and wife Paul and Val Bridgestock from the ground floor of their home in Aude, the restaurant has topped the TripAdvisor charts in Languedoc with 96% of customers rating it as ‘excellent’ and the rave reviews keep coming. “The best meal of our lives” one writes, “a must if you’re in Aude – you won’t regret it” says another.

So just how did the couple from Cambridgeshire end up being the toast of Languedoc’s restaurant scene?

“We fell in love with France about 30 years ago,” Paul explains. “We didn’t think it would ever happen but we put all our efforts into moving over here. Then we bought an old ramshackle place that had been abandoned for 40 years. When we first saw it we were shocked at how run-down it was but then we turned around and saw the view of the mountain opposite, which is pretty glorious, and just fell in love with the place.

It was a very sad house indeed when we first bought it, but slowly, bit by bit, we brought it back to life. It’s a very happy place now.” Following extensive restoration works, Val and Paul decided to open a chambres d’hôtes where they also offered an evening meal. Although they loved the social side of the business, the B&B set-up didn’t quite match their dream of owning a restaurant, as Val explains. “It’s been a life ambition of ours to have a restaurant,” she says. “But we just never thought it would be possible.”

Over the years, the pair worked towards making their dream a reality. They added an extension onto the property to create a restaurant kitchen as well as storage areas and space for diners.

What exactly is a French bistro?

Paul had worked in restaurants back in the UK so could fill the role of chef and Val, who Paul says “makes everyone feel at home” was a perfect fit for front of house. It would be a small operation, but then again, that is how Val and Paul envisaged it.

“We wanted to keep it really personal,” Paul explains. “So Val serves, I cook and we have someone to help with washing up but that’s it. I think that’s the secret to our success. Val is so charming with the clients – everyone loves her.”

Despite being confident in the food they are serving and their warm hospitality, the couple still can’t quite believe how positive the reaction to Restaurant Aux Quatre Saisons has been. “Since we’ve opened the restaurant we’ve been very successful which came as quite a shock,” Paul says.

“Opening a restaurant is obviously a very challenging thing to do but to open a restaurant in another country is an enormous challenge.” The reviews show that the restaurant has been a hit with customers, who are a mix of local French and British people living in the area, as well as people from further afield. “We had a group from Montpellier, which is about two to three hours away who came especially to eat at the restaurant and also people from Toulouse, Carcassonne and even Paris!” Val explains.

The secret to their success

Despite the good reviews, some French customers can’t quite believe that a British chef is behind the gourmet dishes. “We had a French couple in the other night” Paul says, “and they said to me, ‘Where is the other chef?’ When I convinced them that it really was just me, they said ‘But you are English! The food is very good, how is that possible?’.”

Living in the picturesque village of Axat in Aude, Paul and Val have easy access to plenty of fresh, seasonal produce, something that the couple enjoy making the most of. “All our meat is local and we buy organic when we can,” Paul explains. “I travel around 160km a week buying cheese and visiting special suppliers. There’s one farm that’s 2km away and we call the cheese the ‘seven cow cheese’ because the lady only has seven cows; it’s an organic farm and she makes the cheese especially for us – you can’t get it anywhere else. It’s a very nice thing to work with local people. It’s more expensive that way to be honest but the quality is lovely. Having quality ingredients makes my job an awful lot easier,” he says.

It would seem the restaurant’s name that translates as ‘of the four seasons’ is apt for Paul’s seasonal style of cooking. Tonight’s menu, he tells me, features the first of the season’s asparagus wrapped in local bacon from the mountain, plus asparagus soup. In the coming summer months they’ll use cherries from Céret, local apricots and duck breasts stuffed with local figs.

It’s not just the menu that pleases the customers; the restaurant’s wine list is equally impressive. “We’ve got some fantastic wines here in the Languedoc – the local reds in particular are very good and we have our own champagne-style sparkling wine called Blanquette that’s exquisite,” says Val. Just as with sourcing food, the pair will often travel round local winemakers to select the wine on offer. “We put a huge amount of effort into searching for local wines,” Paul says. So, plenty of wine tasting then? “Oh yes!” Paul laughs. “It’s a hard life!”

If you look at the TripAdvisor reviews, it’s not all about the food (although customers do rave about the dishes). They also compliment the ambience and cosy setting. “I do think we have a huge advantage here – it’s a lovely building,” says Paul. “It’s very intimate, romantic and it’s very relaxed here. If the weather is good we also serve outside. Sitting on the terrace in the sun and looking up at the mountain, it’s the most wonderful place to sit and eat,” he says. “It is absolutely magical,” Val agrees. “In the summer we have lots of potted plants and flowers, and the garden is an absolute rainbow of colours.”

The restaurant does not serve lunch, and like resisting the temptation to seat more guests, the pair are reluctant to take another mealtime on. “If we were really commercial, we’d certainly do lunch,” says Paul. “But we couldn’t do both and maintain the level of service and standards that we have now. In any case, we’re often very busy preparing. Tomorrow we’ll be off at 6am to the wholesaler. Then Thursday we do the cheese tour; we go off to three farms picking up cheese.”

But the real secret to the couple’s success, they maintain, is keeping the restaurant small. “We could probably get up to 40 people if we wanted to, but we only ever have a maximum of 22,” says Paul. “Lots of people say that it’s like coming out for dinner with friends and we want to keep that feel about the place. We have settees in front of the fireplace so that people can come in and relax in front of the fire with an apéritif before dinner. We want them to come in and be relaxed and have a great time. Obviously we want to make a profit, but the most important thing to us is that people go away happy.”

Running the restaurant is clearly much more than a business to the couple, and I’m intrigued to know what they enjoy most. “I like to see people having a good time and being relaxed and enjoying themselves,” says Val. “That’s the real sign we’re doing it right.” What do you least enjoy? I ask. Silence. What about the washing up? I venture. “Well we have someone helping with that,” says Paul, “and we don’t even mind that. Our helper will go at around 11 and we’re often there until the early hours. But actually, we have the jazz playing in the background, and we’ll open a bottle of wine and chat about the evening so we quite enjoy that.” Being happy in your work; that, it would seem, is a guaranteed recipe for success.

Previous Article Road trip: explore Aveyron in southern France
Next Article 9 music festivals in France you have to go to this summer