Behind the scenes of a luxury wedding venue in France 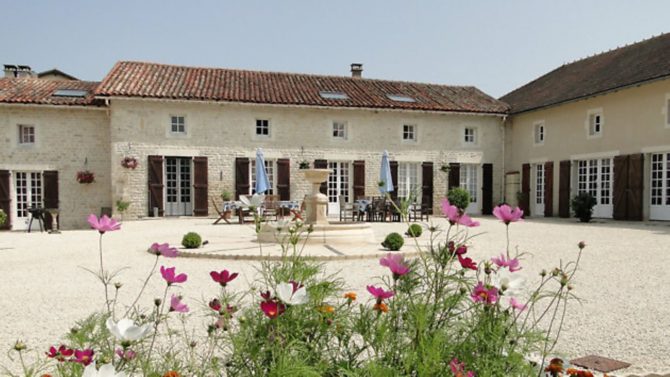 Dreaming of a happily ever after in France? Running a wedding venue could be just your ticket. Gillian Harvey finds out how Clive Harvey found his storybook ending doing just that in Deux-Sèvres

Nestling in the rolling countryside of Deux-Sèvres in Poitou-Charentes, with its backdrop of sunflower fields, is the tiny village of Bouin, close to the historic town of Chef-Boutonne. It is here in this traditional French village that builder, Clive Harvey, 57, brought a magical property back to life.

Like all the best fairy tales, the story began with a chance encounter: although Clive had a long-held dream of running his own wedding venue, it was his brother who introduced him to his future home. “He had been looking at properties in France and on his way back, he stopped at my home,” explains Clive. “He brought some of the estate agents’ paperwork with him and showed me a picture of the property. I was instantly smitten. I had not considered moving to France before, but suddenly it just seemed right.”

Struck by the beauty of La Solinière, with its 18th-century stone building and Charentaise courtyard, Clive contacted the owner and soon found himself heading down the narrow driveway to view his dream home. “The grounds were very overgrown and were in need of some attention,” he says. “But the buildings were all sound and the location was perfect. I just had to rescue it!”

Indeed, it seems that Clive has been quite the ‘knight in shining armour’ as far as the property is concerned. “The first few jobs included cutting back the overgrowth, as well as reinstating and stoning the long driveway. I also installed a beautiful fountain to enhance the centre of the courtyard,” he says. “Cutting back the garden and restoring the grounds felt like uncovering Sleeping Beauty’s castle!”

The property, a 2.5-hectare site with four existing gîtes, main house and large barn set around the private courtyard fitted perfectly as a wedding venue and so Clive began to decorate to suit wedding celebrations.

Tastefully finished with an eclectic mix of vintage wooden furniture, the gîtes exude an air of serenity, with exposed beams and open fireplaces. ‘La Colombier’ – the gîte chosen by many to be their honeymoon suite – also boasts a four-poster bed. “It’s a very romantic location, in a tower gatehouse,” says Clive. Each gîte has French windows opening onto the courtyard, making the site a huge hit with families, as well as wedding parties.

“Currently, we can host small, summer weddings of up to 30 people using a marquee within the lawned grounds, complete with on-site accommodation. My next project is to renovate the existing barn so it is suitable to host larger weddings and parties throughout the year,” he says. “Although I will need to secure planning permission for this, the mairie is confident that there will not be a problem.”

Having a good relationship with the mairie is extremely important for business owners in France, and particularly those wishing to host weddings. Marriages in France must be officiated by the mairie, with church or civil ceremonies only permitted after this legal requirement has taken place. However, Clive is able to offer clients the unusual opportunity of having a legally binding ceremony on site. “I’ve spoken to the mairie, and, as his office is just next door to us, he is more than happy to perform weddings on the premises,” he says. “I’m really pleased as it will be more personal for couples and their guests.”

For those taking a break rather than making their vows, Clive has created a wealth of facilities. “With the help of a beauty therapist, I have developed my vision of the facilities and I have built a spa room, beauty room, Jacuzzi and sauna,” explains Clive. “The spa side of things is something I’m hoping to expand further in future years.” Clive is clearly keen for his guests to experience the same relaxation he has enjoyed since making the move across the Channel.

“The tranquillity I’ve found in France is a refreshing change to the non-stop lifestyle of south-east England where I lived and worked. I enjoy having the time to wander around the grounds, or just sit in the garden with a glass of wine. I have to pinch myself sometimes when I realise this is my home!” says Clive.

Like all good love stories, it seems that fate has played a part in bringing Clive and La Solinière together. “The chances of me finding this property were minuscule, I am excited for the future,” he says. “I’m so glad my brother stopped by that day.”

The role of the French mairie

Planning a wedding in France: the paperwork

Running a hotel and wedding venue in Dordogne

The Living France guide to getting married in France