A stylish expat home in Normandy 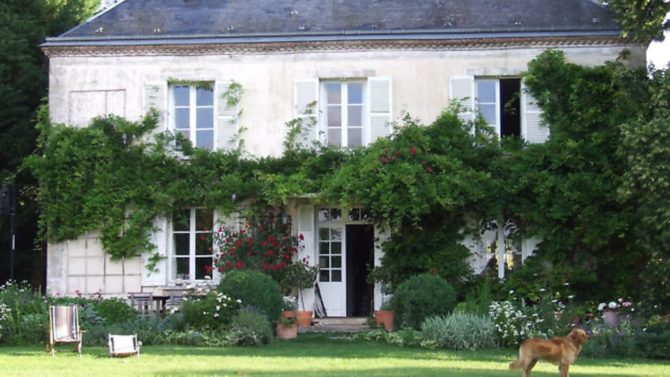 British expat Sharon Santoni has built up an international following for her popular blog about her French country home in Normandy. Find out how she created such a successful blog and where she finds inspiration for her French country interior style

There’s no denying that French style is admired the world over, especially when it comes to interiors. Normandy resident Sharon Santoni knows this better than anyone – her lifestyle blog My French Country Home, which started in 2010 as a small personal project, soon became the catalyst for larger plans ahead, thanks to overwhelmingly positive feedback from an international online community. As well as continuing to run her successful blog, today Sharon also organises popular brocante tours, where she welcomes clients from across the world to reveal the secrets of her little black book, including favourite flea markets and off-the-beaten-track addresses.

For Kent-born Sharon, it’s an unexpected delight born of a natural interest: “I’d really enjoyed decorating our house, and I started the blog at home in 2010 – although to be honest, until the end of 2009 I didn’t even know what a blog was. I think it’s amazing that I’m in this tiny village, and started off on a old, slow computer, and four years later on I’m read by thousands of people each day with a Facebook page that reaches more than half a million people a week!”

Home is a 180-year-old Normandy farm property, where Sharon and her family – Corsican husband Eric, along with their four children aged 17 to 24 – enjoy living. It is a house rich in history and tradition. “In the barn there are still stalls and mangers for the cows,” Sharon explains. “When we bought it, it had already been a home as it used to belong to a family from Paris, and before that to the village doctor. It’s just a lovely house as it’s so friendly; it’s pretty to look at, but it’s not big or over-impressive, it’s just a comfortable, real, family home.”

Sharon first came to France as a university student, where she met Eric. The couple went on to marry, and while they were living in Paris, decided that a new, quieter life in the countryside beckoned.

“We had our first in child in Paris. Then when I was expecting our second child, we decided we wanted to come out to Normandy, to bring up our children in the countryside, but still within easy distance of the airport in Paris. Initially we found a lovely old orangery to rent, which I adored as we were all on our own in the middle of a beautiful forest. When we were in a position to buy, we found this house, where we brought up our four children.”

As the source of inspiration for My French Country Home, the house showcases gentle colours and a creative touch. Though Sharon is quick to point out that she’s not an interior designer, her eye for style is clear to see in the snapshots and details that garner praise on her blog posts. While her interest and passion for French lifestyle has been long held, her introduction to blogging was far more recent: in 2009 an American friend asked her to look at her new blog. “When I started reading my friend’s blog, and the list of blogs that she recommended, it felt to me like somebody had opened the door onto a huge wonderful party that, if I wanted to, I could join as well.”

She began by writing about her Normandy lifestyle, and soon realised from feedback that her audience loved the dream of living in France. Her posts on brocante flea markets were of particular interest. “I started talking about the fairs that I like to go to in the spring and summer that take place in the country villages here, and showing the stuff that I was buying and bringing back. I started getting emails saying: ‘Can we come shopping with you?’ and I thought: ‘Gosh, yes – well, I suppose you could’, and that’s how it started.”

Today Sharon takes buyers to local addresses and, if needs be, into Paris or further afield. “I was down in the south of France recently for a couple of weeks with somebody,” she says. For the most part though, it’s Normandy that holds both the attraction and the key locations for her clients, most of whom are professional buyers on bespoke itineraries, though there are smaller group tours throughout the year as well.

“The service I provide is one of having all the right addresses,” she explains. “I can be sure that I’m getting them into places that they would never even have known about, let alone got into. Like a lady I know here, who sells from her home. There’s no sign saying ‘brocante’ or anything like that; it really is an insider thing. We go to her beautiful home in the countryside, and it’s always a rather special moment.”

Her enthusiasm for Normandy’s lifestyle offerings has a positive impact on the local economy too. “It’s great, because it’s bringing a lot of people here. I really work hard on taking business towards all the local dealers, and then there are all the restaurants and everything else that goes on around it. It’s nice. I feel that I’m contributing locally as well.”

Sharon also has a rental cottage within the grounds of her property, which she rents out to clients and holidaymakers. It originally began life as somewhere for family and friends to stay, and again shows Sharon’s thoughtful attention to detail. “The cottage had already been renovated when we arrived here, and most of the work had already been done,” she explains, “so we just redecorated it. Guests enjoy having their independence.”

When it comes to décor and lifestyle trends, Sharon says: “I think that the shabby look is one of many options now, and that people are going towards a far more simplified, less cluttered look, which may reflect the economic climate. We’re also coming out of the more neutral colour palette and gearing up towards brighter colours again.

“Sometimes people say to me: ‘What does brocante mean?’ I describe brocante as relaxed antiques. It’s not the stuffy side. It’s the patina, the repurposed objects. The industrial look has been popular for a while, and pieces can be absolutely monumental in size. That can take me to some very surprising places!”

Both the blog and the brocante tours allow Sharon to work with her love of lifestyle, and also to enjoy contact with like-minded people. While the tours allow face-to-face contact, working on the blog also leads her to meet new people, be it the guests to her cottage or other bloggers who get in touch when they are visiting France.

“Now and then you do actually have to have contact with a real person,” she says. “You can’t just send emails and write blog posts all day long!”

This admirable balance between the two aspects of her new occupation allows Sharon to enjoy the best of both worlds, something that she credits to that day in 2009 when her American friend emailed her. “Everything I do today has come to me via my blog. I have clients from all around the world. I’ve had people from Australia and America coming to me; it’s really a full-time occupation.”

She’s currently working on her first book, due out towards the end of 2015, and admits: “You have to create your own luck, and then grab it when it comes by.”

However, it’s clear that her French home, the whole reason Sharon started the blog, is still as important to her now as it was then. “What I love in autumn and winter is to have both fires burning inside, in the sitting room. It not only warms up the temperature, but it changes the whole atmosphere. I love that room, as it’s not huge, the colours are gentle, and everybody is comfortable there.”

Proof, if ever it was needed, that the style at the heart of her French country home is as much of a draw as it has always been.

www.sharonsantoni.comRead about an expat couple running gîtes in Normandy