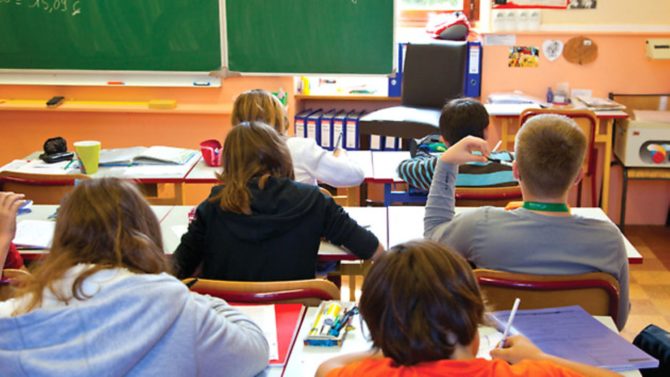 Tackling the French education system? Find out the 10 biggest differences between French and British schools

1. Formal schooling starts at six years in France, although in reality little children are learning from four years old

2. No school uniform in French schools

3. Greater emphasis in France on the core subjects, i.e. French and maths, and less time given to imaginative/creative subjects (story-writing, drama) in primary school, but paradoxically more time given to learning poems and texts by heart.

4. Repeating a year is more common in France, should the child be consistently under-achieving

5. No headmaster or headmistress in French schools – teachers are answerable direct to the regional education authority and a teacher is designated ‘director’ for administrative tasks each year. Secondary schools have a non-teaching, full-time director at the helm

6. No packed lunch in most French schools – it’s either the canteen or home for lunch

7. No celebration of religious festivals, so no nativity play: schools are strictly secular except, of course, for the private Catholic schools

9. Parents must take out annual insurance – called assurance scolaire – for their children attending school in France (it isn’t expensive) but on the upside, parents receive an annual allowance per child for the ‘rentrée’ to help pay for school essentials

10. Private education is far less prevalent in France – Catholic schools are deemed ‘private’, but teachers are paid by the state as in secular schools, and fees are around €100 per term. there is also a relatively small network of high fee-paying private schools

Confused by the French education system? Read our simple guide to the different schools for different ages

Don’t miss these other articles about French education:

5 tips for moving to France as a family

Previous Article Has Brexit stopped Brits buying properties in France?
Next Article Now the election saga is over how will currency transfers to France be impacted?