How many of France’s presidents do you remember?

First published: 4 May 2017 by Sandra Haurant 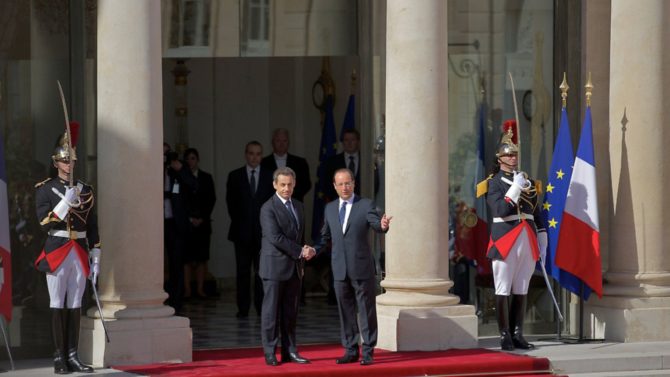 From Charles de Gaulle to François Hollande, how many of the post-war French presidents have you heard of?

France has come a long way since its first elected leader, Louis-Napoléon Bonaparte, later known as Napoléon III, became the first president of the country in 1848. The nation’s turbulent political history is facing new surprises in the 2017 presidential election, but France is no stranger to upheaval; it has seen its political systems evolve and reform time and again.

France is now in its Fifth Republic, a system of government established by Charles de Gaulle on 4 October 1958. De Gaulle became its first president that December and had an eventful decade in power, including the implementation of a change to the constitution that, in 1965, led to him becoming the first directly elected French president since 1848. A nationalistic leader, his aim was to pull the country up by the boot straps economically speaking, while also increasing the strength of the military. In May 1968, violent demonstrations by university students and a paralysing general strike caused turmoil, but de Gaulle brought the crisis to an end by calling, and winning, legislative elections the following month. He resigned in April 1969 after losing a referendum, and was replaced by interim leader Alain Poher, who was succeeded in June 1969 by Georges Pompidou, formerly prime minister under de Gaulle.

38 words and phrases you need to discuss the French elections

Pompidou’s legacy is seen mainly as one of modernisation, with sweeping changes to infrastructure, including laying the foundations for high-speed train lines and pushing a nuclear energy programme aimed at making France as self-sufficient as possible. He set out to bring Paris up to date, too, notably with the construction of the Centre Beaubourg, today called the Centre Georges Pompidou. Built to provide a multidisciplinary cultural centre, including the National Museum of Modern Art, it is also considered a work of art in itself due to the groundbreaking inside-out architecture.

When Pompidou died in office in April 1974, the vacant position was filled once again by Alain Poher, until the election, in May, of the centrist Valéry Giscard d’Estaing. He continued modernising the country, and his legacy includes the implementation of the TGV project. Since leaving office, Giscard d’Estaing, at 91 the oldest-surviving French president, has been admitted to the Académie française and written popular novels. These include La Princesse et le Président, which fuelled rumours of a romantic link between him and Diana, Princess of Wales.

Giscard d’Estaing was succeeded in 1981 by another president with a passion for the written word (and indeed a reputation for romantic liaisons). François Mitterrand led the Republic from 1981 to 1995, the longest time in office of any French president. As France’s first socialist leader, Mitterrand oversaw a number of wide-reaching reforms, including a nationalisation programme. Today, his extra-marital relationships continue to attract almost as much attention as his policies; a collection of Mitterrand’s letters to his lover Anne Pingeot was published in 2016, reigniting interest in his hidden side.

Jacques Chirac followed Mitterrand into the Élysée Palace in 1995 and stayed in office until 2007, successfully fighting off the Front National’s Jean-Marie Le Pen in 2002, when the far-right leader shocked France, and indeed the world, by reaching the second round of the presidential elections.

Chirac went on to support his successor, Nicolas Sarkozy, who was elected in 2007 and served in office until 2012. His term covered the 2008 economic crisis, and he brought in controversial social reforms in 2010, against a backdrop of strikes, when he increased the retirement age from 60 to 62. Sarkozy’s presidency was associated with a penchant for the finer things, and his marriage to the glamorous Carla Bruni gave the couple a higher profile than previous presidential partnerships.

When François Hollande beat Sarkozy in 2012, his everyman persona came as quite a change. He was to be un président normal, a contrast to the perceived ‘bling’ of his predecessor. However, his presidency began with some unexpected insights into his personal life, including a split from his-then partner Valérie Trierweiler and revelations about his relationship with actress Julie Gayet. Whatever his legacy, as his presidency draws to a close in 2017, Hollande will have seen France through some extraordinary, and sometimes difficult, times in the nation’s history.