Happily ever after in France 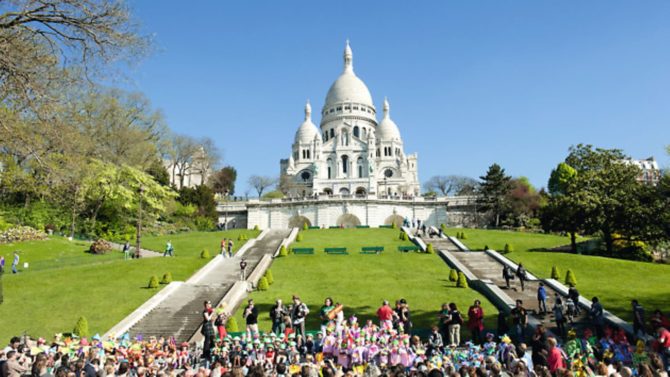 New research has revealed the happiest regions to live across the Channel, so Vicky Leigh takes a tour of the top three to find out just why they scored so well

Globeco, an evaluation group that provides information on the impact of globalisation, has ranked the 22 regions of metropolitan France in order of how ‘happy’ they are. If your New Year’s resolution is to make that dream of owning a property in France a reality in 2014, then this could see you full of the joys come the spring.

For many people it will be the lure of rural Limousin, for others it will be the promise of year-round sunshine in Provence. Indeed a recent poll on our Facebook page revealed just how many different regions are popular, confirming that everyone has their own reasons for favouring a particular part of France. So just how do you measure happiness, when it means so many different things to different people?

According to the French Nobel Prize-winning author Albert Camus, “you will never be happy if you continue to search for what happiness consists of.” Well, it would seem that the analysts at Globeco would disagree with him. They have created their own ‘happiness index’, based on a detailed formula that considers several criteria. These include life expectancy; quality of life; security; peace; the respect of personal rights; crime and poverty levels; as well as the level of education, job training and innovation.

The results are in, and they might well surprise you. Here we take a tour of the three happiest regions, and reveal the others that made it into the top 10.

Home to the French capital city of Paris, the index revealed that Île-de-France is the happiest place to live. The region was shown to be the best for life expectancy (83.7 years), as well as having the lowest rate of violent deaths and the strongest record for research and development. GDP per capita is also almost double the European average.

Île-de-France has the largest number of inhabitants of anywhere in France. Population figures for 2012 were recorded at 11.9m, which is greater than the population of countries such as Austria, Belgium and Finland. The region comprises eight departments in total, with Paris at the very centre. The inner ring of departments, known as the petite couronne, includes Hauts-de-Seine, Seine-Saint-Denis and Val-de-Marne, while the remaining four departments of Seine-et-Marne, Yvelines, Essonne and Val d’Oise make up the grande couronne (outer ring.)

This sprawling metropolis incorporates a number of cities, such as Versailles, which is best known for being the site of the vast royal palace and gardens built by King Louis XIV; Fontainebleau and Marne-la-Vallée. The River Seine runs through the region, and is France’s second largest river after the Loire

The French capital forms the heart of Île-de-France, and as the world’s most visited city the list of attractions could fill several pages alone. From the Eiffel Tower and Arc de Triomphe to the charming cobbled streets of Montmartre beneath the spectacular Sacré-Coeur, not to mention so much more in between, the appeal of the City of Light never seems to fade. Lonely Planet has recently named it as the top city to visit in 2014, and it has also beaten London to the title of world’s best city for students for the second in year running.

“Initially I found it surprising that Île-de-France came out as the happiest place to live, but on reflection perhaps I shouldn’t have,” comments Catherine Ryall of Sextant Properties. “This region really does have it all. There are countless exhibitions and cultural events all over Paris, and it even has a beach during the summer months!”

Gaela Fernandez of My Home in Paris couldn’t agree more. “Paris is a city that offers a plethora of things to make you as happy as possible, from its strong cultural and historical roots to its innovative cuisine and wine, and high-end shopping. There is something for everyone’s preferences.”

“The property market here is relatively stable, and Paris is seen as a safe investment, so choosing to buy here is an excellent option,” says Catherine. “Île-de-France should be particularly tempting for British buyers since it offers such excellent travel connections. It is also worth noting that it is home to some very attractive banlieues, which offer buyers fantastic surroundings for much less money than in central Paris. Neuilly-sur-Seine, for example, is composed of residential neighbourhoods and features more than 90 acres of attractive green areas, including the Bois de Boulogne.”

The region of Rhône-Alpes was awarded second place, and ranked in the top four for average income; the level of poverty; employment, research and development; and education. Regional capital Lyon is France’s largest city after Paris, and has developed a reputation as the gastronomic capital of France. A designated UNESCO World Heritage Site, Lyon is also considered to be the birthplace of cinema, as it was here that the Lumière brothers invented the cinématographe projector in 1895.

With 16 linked ski areas which include the well-known Les Trois Vallées and Portes du Soleil, Rhône-Alpes boasts the largest ski area in the world and is also home to a number of legendary resorts, including Chamonix, Courchevel and Val d’Isère. There are some 5,800 slopes for skiers of all abilities, while for those who prefer to take things a little bit easier there are plenty of spas to choose from. A key part of the après-ski scene, the treatments on offer also provide the perfect way to soothe aching muscles after a hard day’s skiing.

Sporty types are well catered for whatever the weather. The region boasts an impressive eight natural parks, including Vanoise and Vercors, so there’s no shortage of opportunities to make the most of the great outdoors once the ski season is over. A haven for walkers and cyclists, Lake Annecy offers an abundance of water sports and is a popular hotspot during the summer months.

“I’m not at all surprised that Rhône-Alpes is the second happiest place to live in France, because it really does have everything,” says Élise Pidolot-Raybaud of Rhône-Alpes Property Services. “It has breathtaking scenery in both summer and winter, with lakes and parks and, of course, the mountains. The skiing here is legendary, while the capital Lyon is a very sophisticated, not to mention architecturally beautiful city.”

Gareth Jefferies of Alpine Property is not surprised by the results either. “We call it our little bubble,” he says, “and the quality of life  is unsurpassed.”

The average resale price of a property in Rhône-Alpes is €212,200, making it the second most expensive region in mainland France after Provence-Alpes-Côte d’Azur. This is also some €50,000 more than the national average of €161,000. Of the region’s eight deptartments, Haute-Savoie is the most expensive at €341,500, while Ardèche is the cheapest with an average resale price of €154,100.

Properties in ski resorts tend to be popular with investors who are looking for both a bolthole on the pistes and a financial return on their investment, as there is a high rental demand. It is widely accepted that the ski property market has weathered the financial storm, and recently there has been a surge in interest among buyers.

“Although there has been a wobble elsewhere as a result of the crisis the property market here is stable,” comments Élise Pidolot-Raybaud. “Buying to let in the Alps is popular with British buyers, as they can use the property for their own holidays and also enjoy a financial return.”

In third place according to the ‘happiness index’ was Pays de la Loire. Along with Brittany, this north-western region tops the table with the lowest rate of poverty, and was also rated well in terms of its focus on sustainable development.

In historic terms, Pays de la Loire covers parts of the old provinces of Brittany, Anjou, Maine and Poitou, and its capital Nantes was once the capital of Brittany. With two coastal departments and three inland the region boasts a diverse landscape, from the seaside resorts of Loire-Atlantique and Vendée to the rural countryside of Sarthe and Mayenne.

The art of winemaking is one of the most established traditions in Pays de la Loire, and indeed it is impossible to think of this part of France without vineyards and seemingly endless rows of vines springing to mind. As home to part of the Loire Valley, the Val de Loire wine route stretches from the outskirts

of Nantes to the pretty village of Montsoreau, with an impressive 160 places to stop for a glass or two along the way.

Of course, it’s not just wine that springs to mind when thinking about Pays de la Loire. In this land of fairy-tale castles the stunning châteaux are in plentiful supply, from Nantes and Anjou to Saumur and Brissac-Quincé. Fontevraud Abbey is considered to be one of the region’s most spectacular examples of Romanesque architecture, and is the final resting place of Richard the Lionheart and Eleanor of Aquitaine.

“Having lived in Pays de la Loire for 12 years I know exactly why it is so popular for both holiday homeowners and expats living there full time,” says David Evans of estate agency Clé France. “The rolling countryside and diverse departments covering coastal, rural, city and town locations mean there is something for everyone. The region has good transport links with the UK too.”

With an average resale price of €158,000, the cost of property in Pays de la Loire is below the national average and the gap widens even further in the Mayenne department, where the average property price falls to just €110,000. In fact of the region’s five departments, four of them come in below the national average of €161,000. At €200,000 Loire-Atlantique is the most expensive.

“The market in Pays de la Loire has always been very ‘local’, so there is less international influence driving the market upwards like you see in the south of France or indeed in Brittany,” says David. “This means that values are kept in check and therefore bargains are more readily available. Prices are higher closer to the cities and towns, but as a large, mainly rural region the countryside and edge of village locations are where to find the best prices. We have houses to renovate for as little as €15,000 and sometimes even less, and you could even find a château for as little as €400,000.”

Sarah MacGilchrist, of estate agency Belle France Property, lives in the department of Mayenne, which in her experience offers affordable properties for a range of budgets. “There is a great choice of properties on the market to suit all budgets, ranging from small houses in villages to whole hamlets and maisons de maître,” she comments. “Most of the department is rural which makes it easier to find a good sized piece of land too.”

So, if you haven’t made a final decision on where you’d like to live in France, perhaps this will help you on your way to finding your ideal French home.

The ‘happiness index’ line up: a quick tour of the top 10

Île-de-France, Rhône-Alpes and Pays de la Loire are leading the way, but here’s how the remainder of the top 10 stacked up:

Although it didn’t top the table in any category, Alsace performed strongly for average income, poverty levels and employment.

This region scored well for employment rates and joins Île-de-France as the region with the highest rate of investment in research and development.

Had the lowest level of poverty along with Pays de la Loire, and also scored well for sustainable development and electoral turnout.

Although it lost points for job training, the region scored well for average income.

Equalled Île-de-France with a top score in four categories. These were electoral turnout; equality between men and women; employment levels and focus on sustainable development. Average property price: €105,000