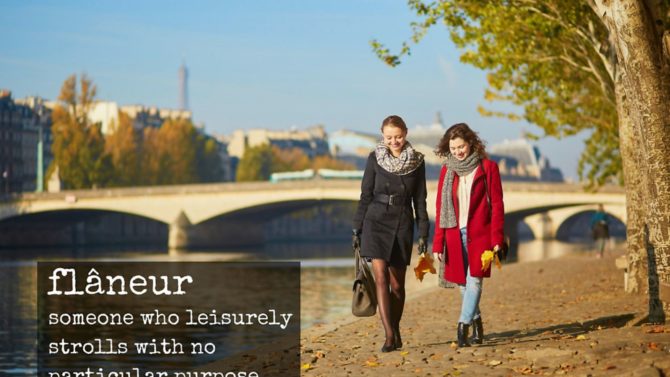 French is a very expressive language and there are just some words and phrases that there is no English equivalent for, these are some of our favourites

This describes the inexplicable urge you feel to jump when standing on the edge of a cliff. It is sometimes translated as ‘call of the void’.

A term to describe someone who lives well, often someone who enjoys good food and wine and socialising.

This can be used to describe somebody’s home or business, or even town/city/country – chez moi (my house/home) – or to say you are among a group – chez les français (among the French) – or to describe someone’s body of work – chez Voltaire (Voltaire’s work).

This describes the feeling of disorientation you experience when in a foreign country, a form of culture shock.

This describes the heart-wrenching pain of unrequited love and literally translates as ‘the exquisite pain’. It is such a good way of describing the feeling that doesn’t have an English equivalent that there was even an episode of Sex and the City called ‘La douler exquise’.

This is a catch-all word to describe a last-minute change of plans, for example a hold-up or hitch, without actually explaining what happened. A good one to use next time you are late for work!

This literally translates as ‘staircase wit’ and is that moment when you come up with the perfect witty remark after the moment has passed, usually several hours later!

To eat and appreciate good food and drink – trust the French to have a word for that!

This wonderfully expressive phrase is used to express frustration or annoyance or to describe a feeling of despair. It literally translates as ‘a bowl full of it’.

This describes the feeling of happiness on meeting someone again who you haven’t seen for a long time and is often used for long-distance relationships.

This is a person who you can take anywhere without worrying about being embarrassed – we all known someone like that (and probably some of the opposite type of people too!).

Previous Article Properties in French countryside to tempt you
Next Article Is a mortgage a good option for British buyers in France?