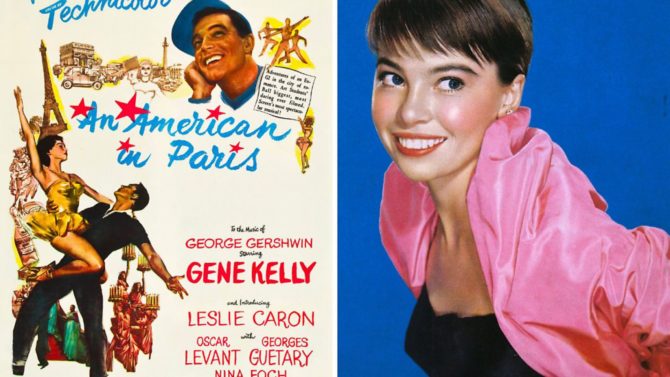 In this 70th anniversary year of An American in Paris, the Oscar-winning musical that launched her career, the actress and dancer on swapping Paris for Hollywood, screen testing with Gene Kelly and owning a restaurant in Burgundy

How did your role in An American in Paris come about?

I was just 16 and had a leading role in La Rencontre at Les Ballets des Champs-Élysées. And one night, Gene Kelly was there. He came to Paris very often. He loved France and his daughter was going to school there. After the show, he came backstage and asked to see me, but I’d gone home. When they told me, I didn’t even know who he was. We had been locked up in France during the war and we hadn’t seen any American films. But finally I went to see him at the Georges V Hotel and I thought he was very nice, but I didn’t think anything of it. But then he said, ‘I want to do a screen test’, and I politely said okay and didn’t think anything would come of it.

Had you ever considered a career in acting before?

Oh no. Absolutely not. I wanted to be a dancer. I was even thinking of changing my name to something Russian. In any case, we did the test and then I had a phone call to tell me I got the part. I wasn’t at all excited. It changed all my plans. After that I had three days when I was quite bewildered. I cut my hair and I made myself a travelling suit on my little sewing machine.

What was it like going from post-war Paris to Hollywood?

We lacked everything after the war. We didn’t have enough food and I was quite anaemic when I arrived in Hollywood. But I looked at dancing as a duty and to me the ballet company was my family. And it was very badly paid in those days. But to tell you the truth, the pay wasn’t very good starting out at MGM. But I didn’t think of the money. I was thrilled to be dancing to the music of George Gershwin. I thought that was just fabulous music and Gene Kelly did such wonderful choreography.

As a French person, was it strange to be a part of Hollywood’s version of Paris?

Yes and we never went to France! It was all very new and of course I couldn’t speak English, even though my mother was American.

Life in Paris is dream come true for LA chef

You’ve worked with some of the biggest names in Hollywood, including Cary Grant and Henry Fonda. And you’re one of the only performers to have danced with both Gene Kelly and Fred Astaire. What has been the highlight?

Working with any of those great, great stars was really thrilling and usually their reputation was well-deserved. Cary Grant was just the most brilliant comedian and it was fantastically amusing to be working with him. Henry Fonda was very timid, but I thought he was a remarkable actor. Fred Astaire was very chatty. He told lots of funny stories. Gene Kelly was very much a good friend, almost like a brother and he guided me through my first job acting in An American in Paris, but he was stern and demanded great discipline. Which was fine because in ballet there was always a lot of discipline required.

After moving back to France, you eventually found yourself in the restaurant business. How did that come about?

I had a weekend house in Burgundy and one day my son, Christopher, and I saw these derelict boathouses for sale in Villeneuve-sur-Yonne. We looked at each other and went straight to see about them, and they were just asking for pocket money. It took a lot to fix them up, of course, and it was a lot of work, but it was a very exciting experience and people flocked to the Auberge la Lucarne aux Chouettes. I’m so proud of what we did for the town, because it really helped to revive it.

What is your favourite place in France?

I love to visit all the beautiful places around Paris. All the famous writers’ houses are simply divine. Not far from Paris is Colette’s birthplace, Saint-Sauveur-en-Puisaye, and there’s a museum dedicated to her and it’s magnificently well done.

And of course you starred in the musical Gigi based on Colette’s novella. Are you a big fan?

Absolutely and I read all her books. As a matter of fact, I am the one who suggested to the producer to do the film and he agreed and bought the rights.

If you could spend a day in Paris, what would you do?

Well, a day in Paris centres around the two main meals, and I’ve personally always adored the city’s brasseries. I loved La Coupole and Le Lipp and it was so amusing because all the celebrities used to end up there. I remember seeing Indrid Bergman there and once even Grace Kelly and Prince Rainier came in. The maître d’ asked me to give them my table. Of course, I obliged.