Where to buy property in Pas de Calais 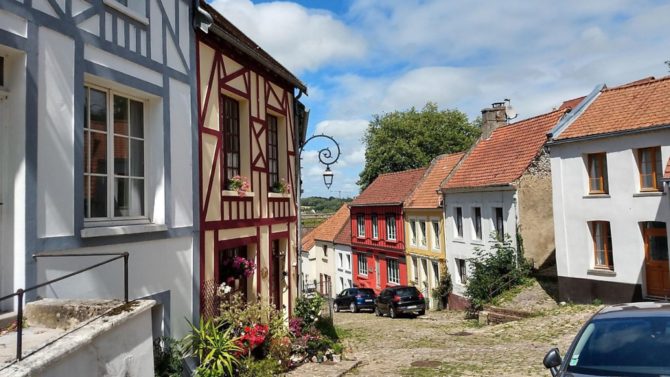 If you’re dreaming of a property just across the Channel in France, here are 12 seaside resorts and rural market towns you really need to know about

Just 20km down the coast from Calais, the little fishing port of Wissant is known as the Pearl of the Opal Coast, in reference to the 120km-long stretch of sandy beaches, dunes and limestone cliffs bordering the Channel. Boasting white sands that attract many windsurfers and kitesurfers, it’s an attractive village of almost 1,000 people that has all amenities and several restaurants and cafés that offer great seafood, naturellement!

A little further down the coast, just north of Boulogne, is the pretty resort of Wimereux, a town of some 7,000 people. Colourful seaside villas recalling the resort’s glory days line the promenade and the beach huts give the town a traditional seaside feel.

The largest fishing port in France is still a small town at heart, with a 13th century château, World Heritage Site belfry and cobbled streets. As well as lively quaysides lined with seafood restaurants, the mini city of some 40,000 residents has major shops, markets, a large aquarium and sandy beaches.

The resort of Hardelot-Plage was created in 1905 by English entrepreneur John Whiteley, who had previously developed Le Touquet (see below). In the long sandy beaches backed by pine forest, south of Boulogne, he spotted an opportunity to build a fashionable destination and a world centre of sports. Today the family-friendly resort has golf courses, tennis courts and equestrian clubs, although some of the original villas were damaged by Allied bombing in the Second World War.

Slightly inland from Le Touquet, Etaples is a fishing and leisure port on the River Canche. a range of activities, including horse-riding, mini golf and a maritime museum.

Known as Paris Plage due to its popularity among visitors from the capital, Le Touquet is the main resort along the Opal Coast, with just over 4,000 full time residents. Elegant villas, set amid the pine forest, began popping up in the 1880s and by the 1920s the resort had a casino, racecourse, fine hotels and a wealthy clientele. Today these attractions have been joined by golf courses, sand-yachting and spas.

Only 45km inland from Calais, St Omer is a large but attractive town of 14,000 people, with lots of shops, and a popular Saturday market. Prosperous in the Middle Ages, it has a Gothic cathedral that took three centuries to build, an impressive town hall and an Italianate theatre. The River Aa surrounds the town along with marshlands that can be explored by boat.

A pleasant and cobbled market town crossed by the River Lys, Aire hosts a number of weekly and seasonal markets including at Christmas. Its narrow streets are lined with 18th and 19th century buildings and its belltower is UNESCO-listed, while its spectacular tourist office is an ornate Flemish Renaissance-style building that once served as the seat of the court bailiffs.

No longer on the sea after it silted up in the 10th century, the walled town of Montreuil is nevertheless a charming tourism destination 20 minutes’ drive inland from Le Touquet on the Canche river. Its fortifications were finished off by the famous architect Vauban and the town has lots of pretty half-timbered buildings and cobbled streets. Despite being home to fewer than 3,000 people, it is the gastronomic capital of the north of France, punching well above its weight when it comes to fine dining. Just ask local boy Alexandre Gauthier, who was voted the best chef in France in the 2016 Gault & Millau Guide and has three restaurants in town.

Another 20 minutes inland from Montreuil brings us to Hesdin in the heart of a particularly scenic area of countryside called the Seven Valleys. Sitting at the confluence of two rivers, the much-loved market town of some 2,200 people has several flower-bedecked bridges, an elegant town hall and lots of Flemish-style architecture as well as plenty of amenities. Nearby attractions include an aquatic and bowling centre, a bee museum and the site of the famous Battle of Agincourt.

Some 20km inland from Boulogne-sur-Mer, the market town of Desvres on the edge of the regional park holds the village des métiers d’art label in a nod to its many earthenware and porcelain artisans. The town of some 5,260 inhabitants has a lively centre and a ceramic museum. The game of skittles (quilles) is also particular to the area with many competitions held between surrounding villages.

Under an hour from Paris by high-speed rail, the capital of Pas de Calais is a photogenic small city famous for its grand squares lined with highly decorative Flemish baroque architecture. The UNESCO-listed belfry offers fabulous views over the historic centre, while hidden below the streets are medieval tunnels that helped British forces hold the town during the First World War. The Vimy Ridge war memorial site is also close by, making the city an important destination for anyone interested in the history of both world wars.

Previous Article French property: This is what you can buy in France for €150,000
Next Article Interview: Actress Leslie Caron