5 of the best French Christmas films to watch 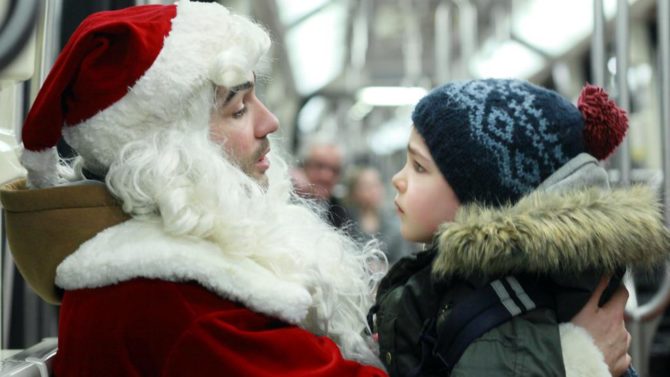 Whether you’re after a feel-good comedy or something more gritty, there’s a French Christmas movie to suit your mood!

Le Père Noël est une Ordure (1982)
Santa Claus is a Stinker
This festive comedy, directed by Jean-Marie Poiré, is based on a slapstick play of the same name. Set on Christmas Eve, two volunteers – Pierre and Thérèse – are doing their shift in a suicide prevention office in Paris when things start to go awry. Its cast includes Gérard Jugnot, who you may recognise as the kindly teacher from the hit musical drama Les Choristes. The US Christmas movie Mixed Nuts, starring Steve Martin, is loosely based on it.
Where to watch: Buy it on DVD from Amazon

Le Père Noël (2014)
Santa Claus
This cutesy comedy stars Tahar Rahim as a burglar masquerading as Father Christmas who gains an unexpected helper in the form of the little boy whose house he was robbing. It’s full of feelgood festive fun and the actor playing youngster Antoine, Victor Cabal, is a star of the future.
Where to watch: Buy it on DVD from Amazon

Un Conte de Noël (2008)
A Christmas Tale
For a grittier take on a Christmas film, Arnaud Desplechin’s story of the Vuillard family is a must-watch. Starring Catherine Deneuve as Junon Vuillard, the family’s tough matriarch, watch as a festive family reunion unfolds in dramatic fashion. It’s a fascinating look at family dynamics and swings between comedy and darkness.
Where to watch: Buy it on DVD from Amazon

Huit Femmes (2002)
8 Women
This festive murder mystery with a musical twist boasts a star-studded ensemble cast including Catherine Deneuve, Isabelle Huppert and Fanny Ardant. It’s set in the 1950s in a country house, whose inhabitants are preparing for Christmas as Marcel, the master of the house, is found dead. Each of the women has a story to share – and, of course, something to hide.
Where to watch: Purchase digitally from iTunes or available on Amazon Prime Video