Choosing contractors for your French house 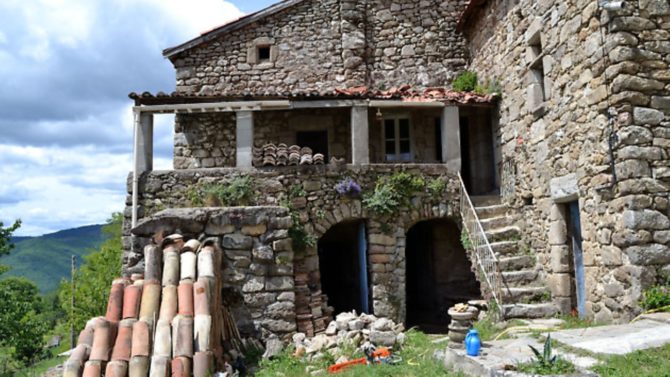 As Matt Montgomery embarks on his second French renovation, he shares insights on choosing contractors and navigating the bureaucracy with David Middleton

For many expatriates, choosing and employing the right French contractor to assist in any restoration project can be a massive headache. Apart from the language problems, local building regulations and the sourcing of materials, there are many obstacles to overcome even before the first brick has been laid.

Expat Matt ‘Monty’ Montgomery is embarking on his new building project after successfully renovating a bar and restaurant in Jura. He is now in the process of renovating a traditional farmhouse in remote Ardèche. With over 12 years’ experience of working with contractors in France, he has hands-on knowledge of how to maintain successful working relationships and has some sound advice for anyone considering taking on a similar task.

When Monty discovered the farmhouse in Ardèche he knew it would not be without its own unique challenges but he was prepared to take them on. More than 20km from the nearest town, and situated in a remote mountainside village with limited access, he drew upon his previous experience in renovation and dealing with French bureaucracy to get the project kickstarted.

“As soon as I saw the building I set myself the task of securing it as quickly as possible despite the fact that its location could turn out to be a logistical nightmare,” he says.

Its remote location, run-down condition and access issues meant that he’d need to pull out all the stops in order to get the project together. He needed contractors with local knowledge and the resources to make the renovation go as smoothly as possible. But most importantly he needed a contractor whom he could trust.

“Right from the start, unless you have adequate language skills plus an understanding of French law and are prepared to battle on alone, you are going to have to find yourself a good notaire or solicitor to help you through the whole process. Finding a reliable contractor is one thing but getting things in writing and understanding official documents is vital.”

Assuming that everything will turn out fine just because you get on well with your contractor is not advisable. “In France, making sure you have everything on paper is the best assurance you can get.”

French contractor Antoine Luquet, whose company specialises in timber frames and construction, backs this up. “We work with a lot of expatriates, some of whom don’t speak a word of French. Although we can try to advise them about things such as building regulations and access issues, we prefer them to work with their notaire so that they fully understand the processes involved. This saves everyone a lot of problems through misunderstandings.

“For contractors working in small towns and communes, recommendations also come by word of mouth so having a good reputation is very important for us.”

Despite a few hiccups along the way, Monty has found his property dealings in France sometimes easier than those he has undertaken in the UK. He cites the use of Napoleonic law, which makes people in France very aware of their rights and obligations in the laws relating to property. Set down in the early 19th century, these laws are constantly adapted to suit present-day needs.

“In the UK there are property laws based on ancient and archaic rights that have remained unchanged over the centuries, making property dealing a bit of a nightmare. In France, transactions can be quite simple if you use your common sense and logic.”

In deciding which contractor to use for various stages of the renovation, Monty also looked for companies with a sound pedigree.

“Contractors of any nationality are a breed unto themselves,” he says, “so you must be absolutely clear about what you want and talk to a minimum of three different companies. For my project, the isolation limits the choice available but I’m still choosy and wouldn’t just go with the first company on the list.”

Antoine Luquet agrees. “Our company has been working with foreign buyers for more than 50 years so we are aware of their concerns. Offering the cheapest quote won’t always win you orders; it is how you plan to complete a project and to an agreed time that counts. An area like Ardèche does present challenges but we have the resources to get to the remotest of places and we can assist with questions relating to building materials and local planning regulations.”

For Monty, this is very useful, especially when considering the types of materials and alterations needed to bring his own building into the 21st century.

“I don’t want to leave choices entirely to the contractor but I recognise that you have to be flexible because older properties can present you with the unknown. Local contractors are familiar with the problems you might face so establishing that dialogue is vital.”

Again this starts with putting everything on paper. “You must have a devis (an estimate) built into any agreement before work takes place. And into that you should also have a contingency for the ‘unknown’. You’ll also need mutual start and end dates included, along with any penalty clauses for running over – in short, be as professional as you would be in the UK and, again, don’t rely on verbal assurances.”

According to Monty, getting to know the staff at your local builders’ merchant is also a good idea, and boosting your French technical vocabulary can be extremely rewarding when you strike up a conversation.

“If you know the French for simple objects like a claw hammer or a spirit level then it shows you’re making an effort and you’ll get a lot of support in return. They’ll certainly remember you every time you walk into the yard or retail outlet.”

So have local planning regulations ever been an obstacle?

“Not really, and the contractors I have used so far are aware of the things to look out for. For me, I am keeping to a traditional style with a few nods to modern-day living. So, an extra window here and there and demolishing an internal wall won’t make a major impact on the original style but it will be geared more towards contemporary living.”

Monty also contacted the local mairie to put forward his plans for the building work. “Although you might get assurances from contractors that everything will have the seal of approval, it is still worth checking at the local mairie. If you are buying a run¬down house in a small village then the mayor will often have a keen interest in seeing the building restored to its former glory. As such, they will usually be flexible when it comes to any improvements. The only issue you may get is if the building is in a listed area and needs to comply with regulations.”

Any works which involve external alterations or the creation of extra habitable space require approval. The mairie will guide you on which form of approval is needed, what information is required, and the different time limits applicable. The mairie will also tell you if the site is located in a Conservation Area, in which case you need to run through the scheme with the departmental Architecte des Bâtiments de France before you make your formal application. This way you avoid having your plans turned down and the project being delayed by several months. In addition to building relationships with contractors and officials, Monty believes that there are other people to consider too.

“Getting on the right side of your neighbours from the very start is a good idea,” he advises. “If you’re in a commune where there has already been a lot of home improvements then many of them will have gone through the same thing. Introducing yourself and talking about your plans and any likely disruptions these will cause will help to put minds at rest and get them on your side. As in other small communities, French people like to know what’s going on around them and they’ll support you along the way if you are upfront with them, especially if they want to see your project completed within your timescales.” Understanding the rights of passage and boundary lines relating to your property, laid down in the sales contract or compromis de vente, will also save any unnecessary disputes further down the line.

Getting to know local environmental issues and regulations is something else to consider. “There’s an onus on us all to behave in as ‘green’ a way as possible. Here in Ardèche, for example, you need a ‘burning permit’ to burn garden waste on your land. So disposing of that old fruit tree you cut down to make way for an extension is subject to getting the right permissions. Even then you can’t burn waste during the summer months and in 2015 there’s a strong possibility that burning will be completely prohibited.”

And it’s not all about the things above ground. In the absence of main sewers, the use of septic tanks is also highly regulated in rural locations and the mairie will have details of what you need to comply with.

For Monty, building a life in Ardèche is not just about constructing the perfect home, it also involves looking at the whole picture. “My own experience has taught me that with care and consideration and a lot of advanced planning, you can get the best out of the people you are working with as well as those who’ll be on the other side of the fence for years to come!”