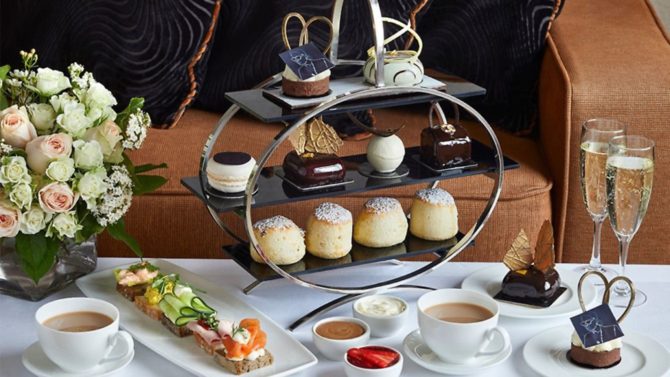 The London Hilton on Park Lane will be serving a fashion-themed afternoon tea which will also honour the late Karl Lagerfeld, head of iconic French fashion house Chanel

Designed by Executive Chef Anthony Marshall, the selection of sweet treats includes a mandarin praline ‘handbag’ and coconut macaroon inspired by the legendary designer, while a blood orange and white chocolate tart is decorated with an image of Lagerfeld himself. Other creations include a condensed milk mousse, a raspberry jelly and dark chocolate parfait, and a passion fruit and liquorice chocolate sphere, which will be served alongside traditional sandwiches and scones.

Diners will also have a choice of Hope and Glory teas in a range of organic flavours, including masala chai, red velvet and jasmine pearls, and can also choose to enjoy their afternoon tea with a chilled glass of Pommery champagne.

Chanel was founded in 1909 as House of Chanel by Gabrielle “Coco” Chanel, who shunned uncomfortable garments such as corsets and instead introduced looser, free-flowing designs for women. She became famous for the ‘little black dress’ and trademark suit, as well as launching the first perfume to feature a designer’s name – Chanel No.5.

German-born Lagerfeld was hired by Chanel in 1982 to be their creative director and breathe new life into the iconic French brand, which was struggling following the death of Coco Chanel a decade earlier. He went on to spend 36 years at the helm, and during that time was responsible for revamping the brand’s prêt-à-porter range and for integrating the famous interlocking ‘CC’ monograph into a style pattern. Considered to be one of the most prolific and celebrated fashion designers of all time, Lagerfeld died in Paris in February 2019 at the age of 85.

The Fashion Afternoon Tea is priced at £39 per person and an upgrade to include champagne is £49 per person.

Previous Article You’re not alone! Advice for solo buyers of French property
Next Article Toast the grape harvest in France at one of these wine hotels