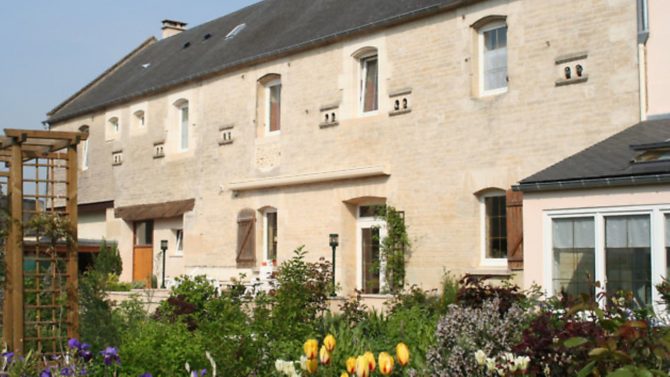 On the 70th anniversary of the D-Day Landings, it is particularly apt that a chambres d’hôtes less than 10km inland from the beaches has come up for sale. Le Clos de la Barre is situated in the village of Basly, Calvados, an ideal base from which to visit these historic sites and their museums as well as the rest of Lower Normandy.

Alain and Françoise Delabarre took over the business in early 2001, at which point it was a bar and restaurant. After renovations lasting three and a half years and costing around €1m, the Delabarres opened as a B&B on 1 June 2004, coinciding with the 60th D-Day anniversary. They have received praise for their warm hospitality and delicious breakfasts on TripAdvisor and have welcomed hundreds of guests over the decade, many of whom return.

The five bedrooms are all en-suite, two of which are within a self-contained, sensitively converted apartment in the loft. In addition to its fitted American-style kitchen there is a large living area with double sofa bed, allowing up to six guests to sleep in comfort. The Delabarres have rented the apartment on a weekly basis with great success but there is, of course, flexibility to incorporate this into the bed and breakfast business.

The other three bedrooms are located on the first floor; the ‘Rose’ suite (pictured, top right) is a wonderfully spacious 40m2 with its own sitting area, while the ‘Orchid’ (pictured, bottom right) and ‘Poppy’ rooms look out over the pretty, English-style garden. All the rooms are double-glazed and soundproofed and there is a lift for less able visitors, as well as a wheelchair ramp out to the terrace. A communal kitchen allows guests to prepare or reheat snacks, and laundry facilities are available. As most guests come by car, Alain and Françoise have also made sure there is covered parking at Le Clos, and there is plenty more in the village square.

“We chose the property for its size and potential to open five luxurious rooms, and especially because it was large enough to allow us to have privacy in an apartment of our own, while still being able to look after guests,” Alain explains. Indeed, the Delabarres have had ample room for themselves and their own friends with three en-suite bedrooms and an impressive sitting room with beams and underfloor heating. Their apartment has direct access to the communal breakfast/sitting room but retains a separate entrance.

‘Le Clos’ refers to the ‘enclosed’ courtyard, formerly part of a farm which was split into three parts after the war, when a farm in the village centre was not allowed. Basly is peaceful and charming, well placed not only for the beaches but also for Bayeux and Caen, the latter with its famous memorial museum. The nearest port at Ouistreham, served by Brittany Ferries, is just 12km away.

After 42 years working in the hospitality industry all over the world and the last decade managing Le Clos, Alain is deservedly ready for retirement. “We are making a sacrifice in selling relatively cheaply – the price has been reduced from €1,150,000 – but we’d like a quick sale before my back worsens. The property has great income potential, even only operating for six or seven months a year as we have done, but the new owner could receive business all year round.”

The Delabarres take with them wonderful memories, particularly of the three veterans and their families who have been coming to stay on every D-Day anniversary since they opened the doors. “We remember sitting with them in the evenings and listening to their stories of the war, including occasions when we had Dutch and German guests, who would ask questions,” recounts Alain. “We also invited 50 friends to celebrate my 60th birthday. It’s great to have so much space.”

Many visitors are American, Canadian and British who come to see the Landing sites, often from military bases in Germany or Italy; some come before being repatriated. Alain fondly remembers each thank-you note sent.

It is evident that, as well as making a reliable income, the owner of this well-positioned chambres d’hôtes can expect to host some special guests with fascinating and moving stories to tell.