An interior designer’s home in Languedoc 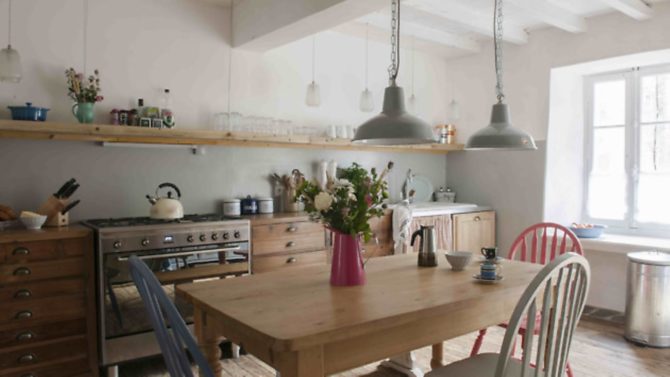 Brighton-based interior designer Clare Topham speaks to Lynette Eyb about her hideaway in the south of France, which combines stylish elegance with a homely feel

Interior designer Clare Topham spends her days transforming other people’s properties into amazing spaces, but two years ago, she decided to take the plunge and bought a French wreck so that she could create her own slice of paradise.

She headed south to Languedoc-Roussillon, which was an area she knew well. “I have friends in the area so I had visited often,” she says. “It’s such an appealing part of France, steeped in medieval history, and the countryside is stunning, with expansive lakes surrounded by dense forest set in the foothills of the mountains.

“You also have the flat plains of the valley and the Canal du Midi weaving through it. An added bonus is that the beach is only an hour’s drive away.”

The relaxed pace of life was also a big draw. “The authenticity of the area is its biggest pull,” says Clare, “as it feels like it’s hardly been touched by time. This traditional, slower pace of French life is what we crave when we think of a getaway.”

It was in Aude that she found a pretty stone house in the village of Cuxac-Cabardès, around 20km north of Carcassonne.

“I had been looking for a little while, as it was important for me to find exactly what I had dreamed of in a property,” she says.

The house, which hadn’t been lived in for 10 years, was in desperate need of repair, but for someone looking to apply years of professional experience to a French property, it made financial sense.

“As I bought a complete renovation project, the initial cost was much lower than similar properties in the area,” she says. “Plus, refurbishment costs were reasonable when compared with the UK.

“I set about drawing up a set of plans and taking down staircases, reconfiguring rooms, adding doorways and building direct access to the house from the plot of land next door – it wasn’t a small task.”

Clare put all her local and professional contacts to good use, sourcing reliable tradesmen and quality materials.

“I was very lucky due to my industry contacts and friends in the area who put me in touch with tradesmen and helped me to source local materials when I needed them,” she says.

“I also shipped items such as lighting and sanitaryware from the UK as the cost and quality here is so good.

“French vide greniers and flea markets were a great source for furniture and accessories.”

The results of her year-long project are stunning. What was once a dusty and dilapidated wreck has been lovingly transformed into a house that is modern and contemporary, but without surrendering its original French cottage feel.

“I love the look that I had seen in charming old French hotels,” Clare says. “I like to describe it as ‘faded glory’: luxury that is comfortable to live in.

“I wanted to recreate that feeling of luxurious French charm without it feeling too contrived. To do this I used typical French vintage colours of blues, pinks and greys that I had been inspired by in toile fabric designs, the paint peeling from French village shutters, and roses or lilacs climbing up sun-drenched houses. I moved away from any idea of them being twee by using them in block colours on furniture and on the walls.”

In the end, Clare committed 75% of her budget to building works and 25% to interiors and decorating, a split she says was fair given the amount of work that needed doing.

This included installing three new bathrooms to ensure each bedroom had its own en-suite, a touch of luxury she wasn’t prepared to compromise on.

Clare believes it’s important to weigh up any short-term costs against long-term gain when it comes to deciding on a level of commitment for structural improvements.

“In my case, the property was described as ‘uninhabitable’ as it needed a new roof and the electrics were dangerous,” she says.

“In a way, this opened up the possibilities as a lot of work was needed and I could take advantage of this and reconfigure the space.

“Plumbing and electrical work in particular can add up, but things like nice bathrooms and kitchens can really add to a property’s value when they are done well.

“In general, I would always err on the side of going for it. After all, you need to speculate to accumulate!”

The property now has everything Clare wanted in a holiday home: plenty of space to relax and areas that afford guests their own slice of tranquillity. There’s a large farmhouse-style kitchen, big living area and three spacious bedrooms.

“A lady who used to live in the house found out I’d refurbished it and she came to have a look,” says Clare. “She was just bowled over by the improvements.

“Flight links to the area are fantastic, so I’m able to get out fairly often and I always feel at home the moment I step off the plane. I also rent the house out to holidaymakers as I’d rather the house was enjoyed as much as possible when I’m not there.

“I have now decided to sell the house as I’m buying a larger property in the area which has an annexe, so I can stay there even if the main house is rented out. It needs renovating too but it’s more of a cosmetic job this time.”