A French icon: the Tricolore 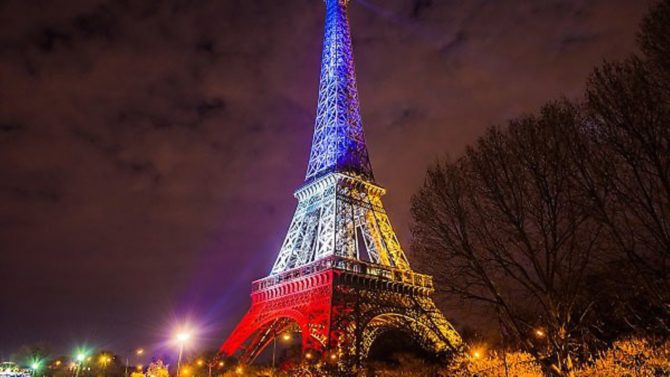 Born out of revolution, the French national flag is the ultimate symbol of liberté, egalité and fraternité

Over the centuries France has had countless flags. In fact the royal coat of arms with three fleurs-de-lis on a blue background was used for more than 600 years. Out of the turmoil of the French Revolution, however, sprang the red, white and blue drapeau tricolore which is today one of the world’s most recognisable emblems.

The red and blue bands on the flag are said to have been inspired by the colours of the cockades worn by the militia who stormed the Bastille prison on 14 July 1789. Red is said to be the colour of the aristocracy, while blue represents the bourgeoisie.

It was Gilbert du Motier, Marquis de Lafayette, who is said to have been responsible for adding white to the flag. The French aristocrat and military officer had fought with the Continental Army during the American War of Independence and went on to help write the Declaration of the Rights of Man and the Citizen, which is enshrined in the current French constitution. Known for his attempts to steer ‘a middle course’ through the French Revolution, Lafayette argued that adding white, a colour traditionally associated with the monarchy, would make the flag truly representative of the country’s different classes.

On 24 October 1790, the drapeau tricolore, with vertical red, white and blue stripes, was adopted by the Constituent Assembly. Shortly afterwards, the newly formed National Guard assumed a tricolour cockade as part of its uniform and the colours of the flag conveyed the values of the French Revolution: liberté (blue), egalité (white) and fraternité (red). In 1794, the colour order was reversed (apparetly at the suggestion of neo-classical artist Jacques-Louis David), giving us the blue-white-red design that we know and love today.

The drapeau tricolore had a brief period of glory during the reign of Napoleon Bonaparte, but as soon as the Bourbon monarchs came to power in 1814, they reinstated their own white flag. The drapeau tricolore was not seen again until the 1830 Revolution, which brought Louis-Philippe to the throne.

Since 1848, the drapeau tricolore has been France’s national flag, although, ironically, it has not always been a favourite of the country’s revolutionaries. During the turbulent three months of the Paris Commune in 1871, it was the red flag that fluttered above the rebels’ headquarters at the hôtel de ville. During World War II, Marshal Petain’s collaborationist Vichy regime added an axe, known as a francisque, to the flag, while the Free French Forces under General Charles de Gaulle added the red cross of Lorraine, said to symbolise the cross on which Christ was crucified.

Flown over the the Elysée Palace, ever present during the Fête Nationale celebrations on 14 July and hoisted at every official ceremony, the drapeau tricolore is a vital national symbol.

Make your own baguette

The oldest surviving drapeau tricolore is thought to be a huge ensign captured by Admiral Nelson’s forces in 1800 during the Napoleonic Wars.

The French flag is 1.5 times wider than its height, and the stripes are of equal width, except in the Navy where the red stripe is wider than the blue and white stripes.

Many residents in the historical Languedoc region fly the flag of the former Counts of Toulouse, with its Cross of Toulouse, rather than the drapeau tricolore. Some town halls fly both flags, along with that of the European Union.