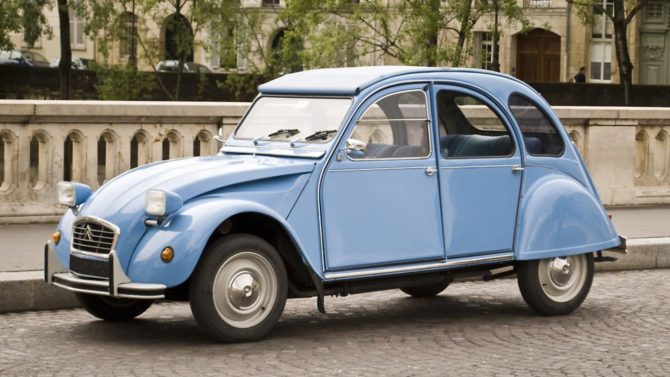 Originally designed to carry two peasants, 100lb of potatoes and as cask of wine, the Citroën 2CV is now an icon and undoubtedly France’s most famous car

Disparagingly dubbed ‘Tin Croissant’ in the US and fondly known as La Deuche in France, the 2CV is one of the country’s most recognisable icons.

According to urban legend, head of Citroën Pierre-Jules Boulanger had a brainwave one rainy afternoon in the 1930s when his gleaming limousine ambled behind yet another horse and cart doing 2km/h along a muddy lane. “Why not offer French farmers a more powerful mode of transport?” he said, to no one in particular.

Overtaking the sluggish cart, he rushed home to reflect on his innovative idea. After doing some market research, he concluded that by designing a rugged car that was cheap to run, he could corner a hitherto untapped market.

A few days later, Boulanger told flabbergasted designers at the company’s Levallois plant in the Paris suburbs to design him ‘an umbrella on wheels’. “And I want it to be capable of carrying a basket of eggs over a ploughed field without breaking a single one,” he added.

Initially nicknaming it the TPV (toute petite voiture), Citroën’s boss stipulated that the vehicle should be tough enough to cope with potholed country roads, consume a maximum three litres of petrol per 100 kilometres, be comfortable without being luxurious and require a minimum of upkeep. The task was so tall it took his team 13 years to complete.

The history of the croissant

Work started in earnest in 1935 and from the beginning the project was shrouded in secrecy. The car had to be lightweight, so designers experimented with corrugated panels from a Junkers Ju 52 aircraft and bodywork made out of aluminium. It had to be economic, so they used an engine from a 500cc motorbike, and – in an attempt to combine comfort with economy – passengers were initially seated in hammocks suspended from the roof by wire cables.

In 1937, the first prototype was whisked away for tests in the grounds of an abandoned château at La Ferté-Vidame. The trials were a disaster: the hammock seats jigged like trampolines, the bodywork rubbed, and the chassis creaked. It was back to the drawing board for the TPV.

Two years later, Boulanger insisted that his baby was ready to launch. The engineers disagreed, but by now they knew better than to argue with the man they had dubbed ‘the imaginative tyrant’. Boulanger ordered 250 prototypes to be built ready for the 1939 Salon de l’Automobile. Production started on 2 September 1939, but at 11am the following day, France and Britain declared war on Germany.

When peace returned in 1945, Boulanger dragged out the only surviving prototype of his TPV, kept hidden in a loft at La Ferté-Vidame, and summoned Flaminio Bertoni, the man who later designed another legendary Citroën, the DS, to work on it. Three years later, the TPV, now called 2CV, was presented at the 35th Salon de l’Automobile in Paris.

Critics were initially scornful, dubbing the canvas-roofed car with a 60km/h speed limit ‘the snail on wheels’ and asking ‘if it came with a can opener’. Country dwellers were quick to see the vehicle’s potential, however, and before the first 2CV had rolled off the production line there was already a six-year waiting list.

By 1953, the Levallois factory was turning out 1,500 2CVs a week and production continued to soar through the decade. More than just a car, the 2CV was seen as a lifestyle; a philosophy; a façon d’être. ‘No wind-up windows, no retractable headlights, no cigar lighter, no fan belt – no wonder it’s so reliable, there’s nothing that can go wrong,’ read one publicity slogan.

During the 1970s oil crisis the car’s economic consumption gave it cult status and in 1981 it even starred in a James Bond film, For Your Eyes Only. Rising costs were making Boulanger’s baby less and less economical to produce, however, and France’s most famous car slowly dwindled from sight.

The Levallois factory closed in 1988 and Citroën moved its plant to Portugal, but it was only short reprieve. In 1991, the last 2CV left the production line.

The advent of MOTs and cheap car loans seemed to have sounded the car’s final death knell. Since the start of a new millennium, however, the 2CV has come back into fashion and there have even been rumours that Citroën plans to build a revamped model.

In a world where the use of energy is an increasing problem, there will always be room for France’s favourite motoring icon.

Quiz: How French are you?