A French address: renovating an apartment in Lyon 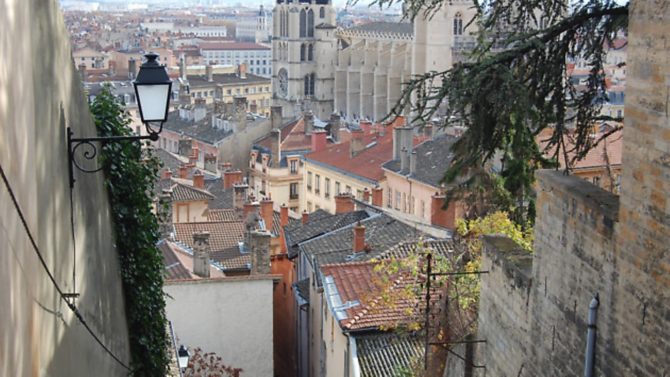 After just one property viewing, Laura Brackenridge and her partner knew they’d found their first home together in Lyon; they then embarked on a major renovation

I don’t know how common it is for a couple to buy the first property they ever view, but that’s just what I did together with my French partner Thibaud. While we had been thinking about buying a property in France for a while, and had been keeping an eye on listings to see what we could get with our budget, we had never actually viewed any properties. This changed one day in early 2013, as we decided it was time to get serious about our search.

At the time, I had been living and working in Lyon for four years and could definitely see a future there. Both with stable jobs, and it being such a good time to buy thanks to the low mortgage rates, now was as good a moment as any. Both of us were big fans of period properties and wanted something with plenty of character.

After two years in our rented attic flat we were also tiring of our low, sloping ceilings and Velux windows, so ideally were looking for a space with high ceilings and rooms with a view. We discovered a property online which not only appeared to combine these main criteria, but was also located in our preferred area, and looked about the right size and price, so we called to arrange our first ever viewing.

As soon as we walked through the door we could see that the property had enormous potential. We were keen to find something that needed work and gave us the opportunity to put our own stamp on it, and this place certainly offered us that. While structurally sound, the estate agent accompanying us mentioned that it needed freshening up and some TLC.

If he could, Thibaud would have handed over the cash there and then! I could already see his ideas for the place flowing. I was more cautious, however, and didn’t want to act on an impulse. By not viewing any other properties we might always wonder what else was out there. Sensing this, our estate agent explained that a first-time buy was always scary, and is never a decision to be taken lightly.

Nevertheless, she went on to say that the feeling you get from a property is important, as is being able to picture yourself actually living there, and you should always trust your instincts. Whether you have visited one or 50 properties, that connection can be hard to come by.

Perhaps she was just saying what we wanted to hear, but these words struck a chord. We could really picture ourselves here, and were certainly prepared for the renovating challenge. As the first people to view the property, there was also no telling how long it would stay on the market.

Therefore, after mulling things over, we decided to at least make an offer, which we submitted on the Monday morning. By the afternoon, we got the call to say the offer had been accepted. I don’t think we realised at the time just how much work would be ahead of us!

A bit of history

The apartment is part of a building which dates back to the late 19th century, at the time when the Croix Rousse area of Lyon was devoted to the silk industry. It was originally constructed to house the silk-workers, or canuts as they are known, so was designed with high ceilings to accommodate the looms.

There was a real history about the property, and we wanted to retain as much of its original charm as possible. We hoped that the building had been constructed from stone, which is typical of other canut-style flats, and while the estate agent assured us there was a good chance it had been, the only way of knowing would be to knock through the old plaster to find out. So, on the day we received the keys, that’s exactly what we did. We were delighted to find the original stonework staring back at us, hidden after all these years.

Originally we scheduled a six-month renovation plan – however, as work began and the actual condition of the place became apparent, this initial timeframe went out of the window. The majority of the walls and ceilings were marked, and also sounded hollow, making us concerned about the lack of insulation behind. We knew that now was the time to focus on repairing the core structure before tackling the decorative aspects.

Consequently, we stripped everything back, removing the old crumbling plasterboard walls, knocking through the existing ceiling, exposing the stonework and sanding down all of the wooden beams. Seeing it all ‘exposed’ like this I was worried that, by making such drastic changes, we were destroying part of the property’s soul. However, once we began to insulate and re-plaster, I saw it more as a centurial cleanse. We were removing the tired and neglected elements and breathing new life into the apartment, while retaining a sense of its history in the form of the wooden beams and the original stonework.

After all, such features are what make these old properties so charming in the first place and we both agreed it would be best to work the rest of the decorative scheme around them. In a way, having stripped everything back to basics and discovered what lay beneath the surface, our property showed us the way forward.

Restoring the original stonework was a true labour of love. The hardest aspect was actually selecting the colour of the grout – choosing between 30 shades of beige is not as easy as one might think! Shade selected, I found myself with my trusty trowel and grout mixture week after week.

While it was time-consuming, I have to say I enjoyed having a creative outlet and being able to measure the progress of my work each day. There is something immensely satisfying about tangible results.

Most techniques we learned as we went along, as neither of us had any real experience with renovation projects. We are both hands-on, practical people, and were lucky to receive lots of help and support from friends and family, as well as our neighbours, whose support truly shone through during our first meeting of the syndic of our copropriété.

After sanding one of our structural beams, we discovered that little sections of the wood would flake away, leaving a grainy, crumbling texture behind. We arranged for a carpenter to investigate further, and the diagnosis was a type of tiny woodworm gnawing away inside the beam. It was nothing serious and could be treated, but would cost us a considerable amount of money. However, as the beam was structural and supports the entire building, the issue of the woodworm became a matter for the copropriété.

As a result we found ourselves having to present the issue, and we’d only just met some of our neighbours for the first time. Obviously this was a sensitive subject, as we were still new to the building and were making noise every weekend. We weren’t sure how asking them to spend money on what could be seen as our repair job would go down.

Luckily the neighbours were more than understanding, and were relieved we had made them aware of the problem when we did. They commented that if we had just ignored it, a collapsed structural beam would prove a much more expensive repair job in 20 years’ time than a quick treatment now. There was a vote and everybody unanimously agreed to share the cost. Afterwards our neighbours even congratulated us on the renovation, and came by for a closer look and an apéro.

The work lasted a total of 12 months, and we moved in almost exactly to the day of receiving the keys a year earlier. While not entirely finished, the space was comfortable enough to feel at home in, and our following weekends were filled with finishing touches, such as fitting the skirting boards.

Lyon is a city that is rich in history, and we felt it was important to bring some of that history back into our new home. We visited a museum in the Croix Rousse area which explains the old silk-working techniques. The gift shop sells old fabric designs and sketches dating back to the time when the industry was booming, and as a gift we received one design dated 1883, which outlines the different colour codes for textiles and fabrics. This is now framed and sits proudly on the wall in the kitchen as another reminder of the property’s past.

We really feel that we have respected the cultural heritage of the building, and have invested lots of time and effort in bringing back the original charm. I learned a huge amount from the entire renovation experience, and my French building and DIY vocabulary has certainly improved! While at times it was tough, the satisfaction of now living where we do makes it all worthwhile. It is definitely a challenge we would like to take on again in the future.