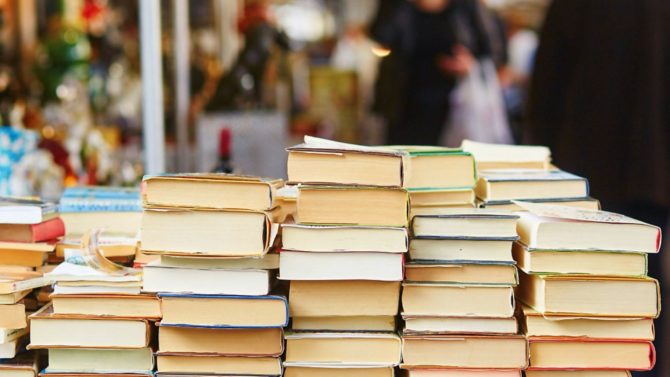 Bookworms rejoice, here are eight independent bookshops in France, where you can browse the best of French and international literature and find your next great read.

France has double the number of independent bookshops of the UK. Fixed book-prices, a cap on discounts and the creation of Cités du Livre are some of the ways independent booksellers are supported in France. These bookshops around France are worth a visit:

The delightful little town of Bécherel in Brittany, north-west France, became the first Cité du Livre (book town) in the country in 1989. The quaint but lively town has at least a dozen bookshops including La Souris des Champs, which alongside old and news books also sells a charming collection of flea market crockery, kitchen utensils, tea towels, linen, and decorations for the garden.

A large modern bookshop in Strasbourg, Librairie Kleber, is an independent bookshop with a wide selection of books from all genres. The shop also organizes weekly debates with writers (novelists, sociologists, psychoanalysts, historians, artists) and has become a hub of debate and idea exchange.

Celebrating its 100th anniversary this year, the Librairie Maupetit is the oldest bookshop in Marseille. Over the years it has grown and expanded its business and has become one of the essential cultural sites of the city. It was awarded a LIR label, by the Ministry of Culture, in 2011, a label that was created to recognize the value and support the commitments and quality work of independent booksellers. The bookshop organizes events and workshops for adults and children; and even has a photography exhibition room.

One of the largest independent bookstores in France, Sauramps has 400,000 titles available across its six store locations in Montpellier, southern France, and more than Two million on it website. The shop was originally opened as a stationary and printing shop in 1946 and still sells stationary alongside its wide rage of books today.

La Manoeuvre near the Place de La Bastille in Paris, is part of Librest a group of nine independent bookshops in Paris that share stock, allowing shoppers to pick up any of the 350,000 available titles from their chosen store in 24-48 hours. With a stylishly dark and industrial interior, the books at La Manoeuvre do the talking, and when invited for the regular events the store holds, so do authors. La Manoeuvre offers a wide selection of French literature as well as a smaller range of books in English.

A post shared by Librairie Clareton des Sources (@librairieclareton) on Aug 17, 2018 at 7:23am PDT

A cute and friendly place to browse and meet friends, Les Bien-Aimés sells a selection of international books and DVDs and also has a café which sells a variety of vegetarian and vegan dishes and cakes. The name, Les Bien-Aimés, meaning ‘the beloved’ is a nod to the 2011 comedy-musical film by Christophe Honoré.

Clareton des Sources is an independent general bookshop in Béziers with over 30,000 titles spread over three levels. Following a name change and a restructure after the bookshop hit hard times in 2014, Clareton des Sources, run by a husband and wife team and with the help of a further four staff, is still dedicated to bookselling and excellent customer service.

Located in an old forge, the Librairie Tapage, Montolieu is dedicated to graphic novels, illustrated books and children’s picture books and also has its own resident artist who illustrates a comic about the lives of cats. Another book town, Montolieu has around 15 bookshops including used bookshop L’Alcyon which sits on the same road as Librairie Tapage.

Enter one of our book giveaways

Previous Article 30 expert tips for buying a property and living in France
Next Article Win! Versailles by Colin Jones