7 reasons to live in Dordogne 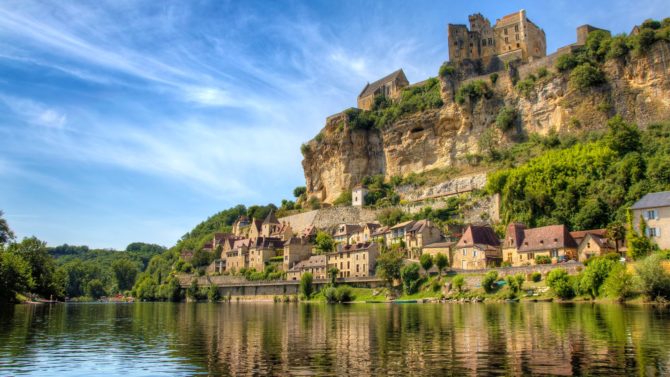 Not sure where to settle down when moving to France? Here are the reasons why Dordogne is a great place to live:

Dordogne is home to no less than 10 of France’s Plus Beaux Villages (most beautiful villages), which include Castelnaud-la-Chapelle, Limeuil, Monpazier, St-Amand-de-Coly, St-Jean-de-Côle, Belvès, Domme and La Roque-Gageac.

The town of Sarlat-la-Canéda in Dordogne has the highest density of historic monuments of any town in France thanks to the Malraux law, which trialled in Sarlat in 1962, which aimed to preserve and protect the heritage of France’s towns. Architectural remains from the Roman Empire can still be seen throughout capital Périgueux and you will also find the Lascaux caves in Dordogne, famous for their Paleolithic paintings.

3. The local specialities are mouth-watering

Food and drink is a cornerstone of life in Dordogne. The area around Bergerac is famous for its wine and produces red, white and rosé. The Périgord walnut received AOC status in 2002 and is found in everything from cakes to liqueurs. Dordogne is also foie gras and truffle country – with black diamond truffles selling for €600-800 per kilo – and in summer, markets overflow with juicy strawberries and asparagus.

4. It has mile upon mile of peaceful countryside…

Dordogne is a relatively large department with plenty of rural bliss to be shared around its some 420,000 inhabitants. Named after the river that runs through it, Dordogne’s undulating landscape is a perfect mirror of quintessential France with its soft green meadows and vineyards wrapped around romantic chateaux and fortified hilltop villages.

5. …but there’s still plenty to do

Dordogne provides ample opportunities for activities, from golf and cycling to horse-riding and canoeing. Canoeing is one of the best ways of seeing the department, passing alongside the medieval towns and châteaux and perhaps stopping for a picnic or swim. You can also try out a treetop adventure course in one of Dordogne’s many forests!

Despite its rural character, Dordogne is served by two airports at Bergerac and Brive-la-Gaillarde and, across the border in Gironde, by the international airport at Bordeaux. What’s more: plans are underway to launch a new high-speed train service from Paris to Bordeaux in just two hours by 2017.

Houses in Dordogne come in at an average of €1,250/m2, well below the national average of €2,300/m², and there are so many tempting options to choose from…

Previous Article 48 hours in Megève: The best things to see and do on a short break in the Alps
Next Article French property: How has Brexit affected British owners?