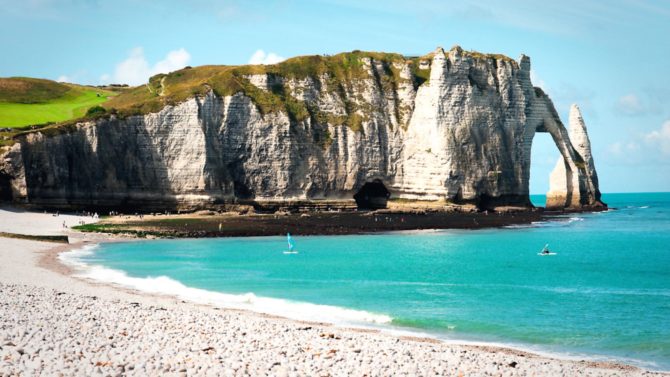 Loved Lupin on Netflix? Then why not go househunting on the Côte d’Albatre in Normandy, where the gentleman thief had his lair

The cult Netflix series which takes inspiration from the literary character Arsène Lupin was the first French series to feature in the US top 10, and has been a huge hit this side of the Channel and Atlantic too.

The master of disguise was created in 1905 by French writer Maurice Leblanc, who situated one of his novels, The Hollow Needle, in the Normandy seaside resort of Etretat. Although a work of fiction, it was based on a revered local legend; the ‘needle’ refers to the distinctive rock formation just off the coast, in which a king’s treasures were believed to have been hidden. Many searched for this horde of gold, jewels and pearls, one in particular you may have heard of; the ‘man with the iron mask’, who was imprisoned by Louis XIV.

Lupin’s secret lair was in a cave within the soaring white cliffs that give this stretch of coast its name. You can look for it today, and visit author Leblanc’s Etretat home. It’s now the Clos Lupin Museum, dedicated to the literary character who was a household name in France long before the Netflix series hit our screens.

The town itself features in the series too; in episode 5 you can see the stunning seaside scenery for yourself, a backdrop for promenading visitors dressed in top hat, cloak and walking stick, in homage to their literary hero.

There’s much more to Etretat than Arsène Lupin though. Ever since the train brought wealthy Parisians to the Normandy coast it’s been a popular holiday and second home destination. The extraordinary cliffs – which stretch some 120km along the coast and are up to 90m high – also attracted artists and writers, including Renoir, Monet, Guy de Maupassant and Victor Hugo.

This cultural crowd built seaside retreats here, elegant half-timbered Norman villas, now private homes and hotels. Here are just a few reasons why you too might want a base in the area.

Once a humble fishing village (its oysters were said to be favoured by Marie Antoinette), Etretat is known as the pearl of the Alabaster Coast. It’s just one of many popular seaside resorts along this scenic coastline. Travel a short distance east and you come to Fécamp, a busy fishing port and resort, known for its Benedictine liqueur distillery housed in an ornate 19th-century palace.

St-Valery-en-Caux is another picturesque town, set in one of the deep inlets in the cliffs with seafood restaurants either side of the harbour. It’s hard to believe this pretty town was almost destroyed in the WWII siege that that led up to the British 51st Infantry Division surrendering to Rommel.

Another resort with beautiful scenery and architecture is Varengeville-sur-Mer, popular with the fashionable 19th-century crowd, as was Les Petites Dalles. Veulettes-sur-Mer is another popular seaside town with the trademark pebble beach and soaring cliffs, while the largest sandy beach is to be found at St-Aubin-sur-Mer.

The Plus Beaux Village of Veules-les-Roses is a surprising mix of seaside resort and charming village. It’s home to France’s shortest ‘fleuve’ (seabound river), which at just over a kilometre long runs through the village past chocolate-box houses and across the beach to the sea.

At the eastern end of the Alabaster Coast, Dieppe is more than just a port, with plenty to see and do from the beach to the castle museum and WWII memorial. The presence of coastal towns with commercial activities and employment opportunities (Le Havre, Fécamp, Dieppe, Le Tréport etc) is an added benefit to this area, especially for those considering a full-time move.

Head inland and you emerge from the wooded coastal valleys onto the large agricultural fields of the Pays de Caux, a traditional rural area, where you may even catch one of Normandy’s remaining dialects, Cauchois, being spoken.

Between the River Seine and the sea, you’ll find small market towns like Goderville, Fauville-en-Caux, Yerville, Bacqueville-en-Caux, Doudeville, Cany-Barville and Ourville-en-Caux. The main town is Yvetot, which was rebuilt after being destroyed in the Second World War – its unusual round church has remarkable stained-glass windows – while Doudeville is the flax capital, an important crop for the area.

To the south is the lovely Boucles de la Seine Normande Regional Natural Park, crossed by the River Seine on its way to the sea via Rouen. The plateau is dotted with small coastal rivers such as the Durdent, Veules and Saâne, and streams like the Austreberthe that flow into the Seine.

Between the coast and countryside, you’ll find a wide range of properties on offer, from seaside apartments to imposing rural homes.

On the sometimes windswept plateau, substantial enclosed farmsteads or ‘clos masure’ shelter behind high walls, squares of trees and hedges; originally, they would have housed the wealthy landowner and his agricultural workers. Dovecotes or pigeonniers are also a feature of the Pays de Caux.

The Alabaster Coast originally became fashionable due to its relative proximity to Paris, and this easy access to the capital is still a big bonus. The resorts are only two hours away, with easy access via four autoroute motorways and three railway lines.

British holidaymakers and househunters benefit from two ferry ports, either end of the Côte d’Albatre, at Dieppe and Le Havre.

Despite being popular with French holidaymakers, and considering the ease of access for Brits, you hear very few British voices when you’re out and about on the Côte d’Albâtre, and even fewer in the rural Pays de Caux. Yet it offers so much, from beautiful coast and country locations to attractive property.

While this isn’t the cheapest area of France, it offers surprisingly good value seaside homes, especially when you consider the proximity to Paris. The average house price in the Seine-Maritime department, of which the Alabaster Coast is part, is €162,000, over €20,000 less than neighbouring Normandy department Calvados, which also has a coastline.

You’d expect seaside areas to be pricier but in fact it’s the presence of Normandy capital Rouen that hikes the values, and away from the city prices come down. Fécamp has a very reasonable €121,500 average while St-Valery-en-Caux is €135,000 and Etretat €151,500. Compare this with other Normandy seaside towns such as Honfleur (€220,000) and Deauville (€407,500).

There’s not as big a gap between coast and country as you might expect either. Average house prices are €135,000 in Doudeville, €150,000 in in Terres-de-Caux, a rural commune bringing together several villages, and €160,000 in Yvetot.

Local agents have noticed an increase in demand from Parisians since the end of the first lockdown. Remote working allows them to take advantage of second homes and some have changed their lifestyle completely, moving to Normandy and only returning to Paris from time to time.