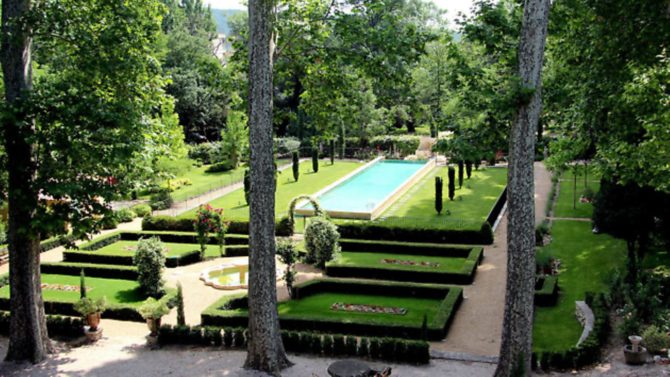 With spring on its way, Joanna Leggett retraces the history of garden styles in France and takes us round the gardens of some stunning homes on the market right now

When it comes to a ‘proper’ French garden, one immediately thinks of beautiful intricate knot gardens or long avenues of trees interspaced with large ponds, of wide, sweeping swathes of Provençal lavender growing in serried ranks which almost look as though a comb has been run over the ground in which they were planted.

At its heart, the French garden has always been about symmetry. With the house often at the centre, paths radiate outwards creating long views; they tend to be of gravel, edged with clipped hedges – different shades of green with topiary are essential to this type of garden design.

Taken to the ultimate extreme there are gardens devoted entirely to topiary such as those at the Château de Marqueyssac in southern Dordogne – managing these is beyond imagination as it must take a veritable army of gardeners to keep their geometric shapes clipped to perfection.

This love of symmetry began, so they say, with André Le Nôtre, commissioned by Louis XIV to create his magnificent gardens at Versailles. He was first talent-spotted at Vaux-le-Vicomte where he had designed formal parterres, pools and gravel walks for the king’s ‘superintendent of finances’, Nicolas Fouquet. Once completed in 1661, a Grand Spectacle was held to show it off to the king and within three weeks, Fouquet had been arrested for embezzlement of state funds and his garden designer taken into court employ.

Today, Le Nôtre’s designs are considered the height of French formal garden style. It was order, structure and symmetry which set his approach apart – so different from the English style of Capability Brown with gentle countryside dotted with apparently natural lakes and trees. Nôtre’s beautifully clipped parterres frame long walks; pools and fountains are centralised to maximise impact. Formalised beds echo each other across a central axis leading away from the house; geometry is at the core. Simple planting schemes were used and flowers were almost of secondary interest to the shape and design of the garden; low-lying box hedging squares are even sometimes filled in with coloured gravel.

One of the most outstanding examples of this formal style of design is found at Villandry in the Loire Valley. You can climb to the top of the château to take in the stunning symmetry of its gardens, filled with a variety of plants from vegetables (grown for aesthetic merit rather than consumption) to cosmos.

Another example is the wonderful château at Chenonceau with its beautiful arches extending over the Loire river: here are two gardens of perfect symmetry – one for Diane de Poitiers, mistress of Henri II, the other for Catherine de Medici, his queen, who took over the château after Henri’s untimely demise. The kitchen gardens here are hedged with low-lying espaliered apple trees, while a dedicated cutting garden supplies the flowers for the beautiful floral displays in every room – a feature of any visit to this magical place.

Lines of plane trees are also typical in this type of garden design, a style that has been perfected in a substantial Provençal country house which is currently for sale. In the centre of Aix-en-Provence, accessed through private gates that open into an alley of century-old plane trees, the gardens at this property extend over two and a half acres. They include extensive terraces, formalised box-hedged areas with ornamental fountains, rose and vegetable gardens and an infinity pool recalling the traditional bassin often found in this area. The house itself is impressive to say the least, boasting eight bedrooms, and as it was totally renovated in 2005 it could even be a boutique hotel.

As time moved on, the taste for formalised planting evolved into a softer, more colourful landscape, but some gardens remained formal, such as the two acres surrounding the 18th-century former presbytery in Neufchâtel-en-Bray in Normandy. Built in 1736 on the site of a farm acquired by the curé, its original gateway still bears the name of the builder. In addition to six bedrooms and all the living space one could possibly need, this Norman property boasts a sweeping staircase which might be considered somewhat grand for its original inhabitant. Outside, the formal Jardin du Curé awaits, as well as a raised terrace, lawn, stocked fish pond and pastures.

Of course, you cannot talk about Normandy without speaking of the most famous – and wonderful – gardens of them all: Giverny. Here, Monet spent 40 years creating wonderful gardens which inspired his paintings with their broad strokes of colour. The bright colours of spring with irises and thousands of bulbs (the subject of many of his paintings) are followed by roses avalanching with blooms over pathways. He dammed a stream to create his lake, planted water lilies and erected the famous bridge, which now cascades with wisteria. It is the site of many a pilgrimage by garden lovers from all over the world who come to revel at this special place.

One of the best things about living in France is the opportunity to eat outdoors for much of the year. In our own garden we have created a special outdoor eating area, situated off our entry courtyard, where we can shade ourselves from the heat of the midday sun or while away long evenings seated around the table talking and eating with friends. The French courtyard is considered important and integral to the house. Often gravelled, it will contain outdoor eating areas designated for different times of the day. The morning café here, the evening repas there; lunch will be eaten at a long table under an awning or parasol, usually conveniently located close to the kitchen, with many pots of rampant geraniums and flowering plants surrounding the whole.

In Pays-de-la-Loire, a detached Vendéen farmhouse, complete with the obligatory swimming pool, set in over a hectare of parkland and garden has several of these special seating areas. One is surrounded by low stone walls holding back banks of white delphinium and luscious planting schemes in the summer, while another is a pretty terrace leading out from French doors. Screened by an attractive boundary of mature trees, the land has been laid out as a four-acre park including informal garden areas in a semi and fully naturalised scheme. The property includes a three-bedroom home and a separate barn used as a games room. There is also another small barn which is used as a potting shed and workshop.

Lakes and water are always a drawcard for gardeners, and just south of Limoges in Haute-Vienne a three-bedroom house sits waiting for a new owner beside a beautiful private lake. Idyllically located, once through the covered entrance the drive leads you around the lake and gardens to an L-shaped house – its salon has four sets of French windows facing towards the east, south and west, capturing light all day and framing beautiful views over both the garden and the surrounding park. The former stables have been converted into a studio/workshop, but perhaps most magical of all is a beautiful 45m² treehouse from which you can survey the views.

Previous Article Why buy property with a French mortgage?
Next Article Carol Drinkwater on life in Provence